With the banning of hoop skirts, the university is committing a devastating act of generalization. 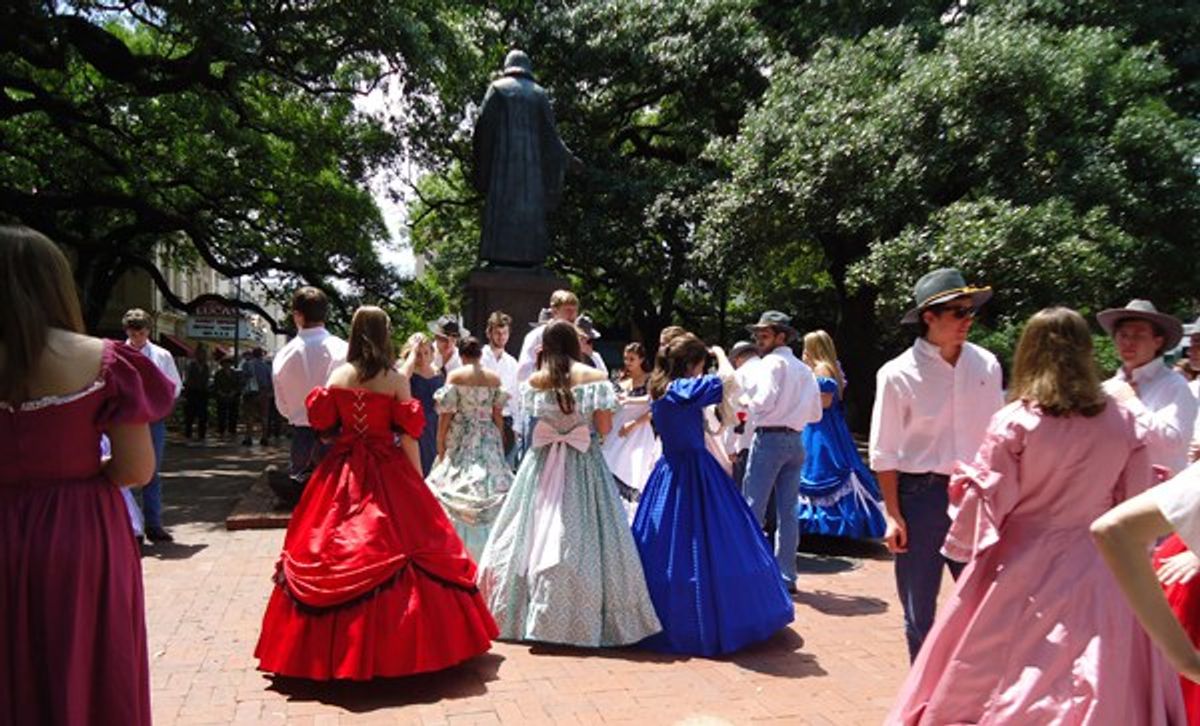 Recently, a leaked video of University of Oklahoma SAEs singing a racist chant prompted an increase in national scrutiny of fraternities. On Monday, UGA responded to the backlash from the incident by banning girls from wearing hoop skirts, affecting KA's Founder's Day celebration and SAE's Magnolia Ball. There is controversy surrounding the decision for two reasons; both fraternities at UGA have done nothing wrong and are in no way associated with the actions of the SAEs at Oklahoma, and while many see the antebellum hoop skirt as a costume worn for fun, others see the hoop skirt as a manifestation of racial intolerance that in some way celebrates racial intolerance.

It's a tricky subject for sure, since the U.S. has a history of racial inequality, but the ban on hoop skirts is unjustified and narrow-minded. In no way do hoop skirts have any relation to racial intolerance, as they have been a fashion staple for women for almost 300 years. Hoop skirts were popular all over the world for more than two centuries. They were called Verdugado in the 15th century, Panniers or “side hoops" in the 18th century and Crinoline in the mid-19th century. Hoop skirts could be seen all over Europe in places like Spain, France, England, and later in the United States. Recall that in “Gone with the Wind," Scarlett and Mammy are both seen wearing hoop skirts. They were worn by women of all ages, social statuses and races to create a more “womanly" shape.

Historically, fashion is largely associated with human culture. Clothing indicates the time in history, the economic class, the geographic location of the wearer, the gender and the society a person belonged to. There is no denying the importance of clothing to cultures around the world as they signify national pride and pay homage to the past, but there is no culture in existence that doesn't have an ugly side. Is it right to let the ugly overshadow the good?

The Ancient Egyptians were quite the fashion plates of the ancient world; their traditional garb consisted of gladiator sandals strapped up their legs with white togas and ornate headpieces. The Egyptians weren't just style masters, they were known for their equal treatment of the sexes, scientific advances and their modern organization of the government. Their traditional clothing is relevant today -- children wear the full Egyptian garb for Halloween and gladiator sandals are trendy fashion staples; both completely accepted by society.

Yet, Egyptian culture is not squeaky clean. They were notorious for their enslavement and mistreatment of their conquered, but when people see children in togas they don't automatically think of Egyptian slavery because Egypt was bigger than just that. Slavery was a terrible institution that devastated thousands who suffered horrific injustices, but letting the institution of slavery manifest itself through traditional Egyptian clothing is a terrible generalization of a much deeper culture.

German Lederhosen is as iconic as it is historic. The shorts were worn in Germany, Austria and Northern Italy from the 18th century to just before World War II. Germany was settled by the Holy Roman Empire and was the birthplace of Martin Luther's Protestant Reformation. Johannes Gutenberg invented the printing press that allowed for the mass production of printed books. Bach, Mozart, Beethoven and Handel, who all identify as German or Austrian, composed some of the most beautiful music the world has ever heard. While German history is rich and celebrated, not all of German history is innocent. The Protestant Reformation was horribly violent, thousands were put to death as a result of their faith and many more persecuted. More recently was the Holocaust, the attempted elimination of the Jewish people by Adolf Hitler and the Axis Powers. Both events were horrific and inexcusable. The world still heals from the heartbreaking injustices suffered in the Holocaust and the global devastation it caused. We will always remember the lives that were lost and the extent of the pain the Holocaust caused. The German culture is not defined by the ugly aspects of its history. People wear Lederhosen today at festivals and to represent German pride.

The hoop skirt is a part of southern culture; that much cannot be denied. The antebellum South was the beginning of the “southern culture" that many people identify with today. When the United States was settled, many immigrants came to the South and started towns, businesses, and families. The economies flourished as the population of the US skyrocketed. Early southern culture, known for its booming economy, foreign trade and emphasis on civil mannerisms had an ugly side to its history too, in racism and slavery. Both were equally terrible yet were certainly not the only parts of Southern culture.

There is no wholly innocent or perfectly just culture that has ever existed. Every culture is flawed and has committed unspeakable transgressions against humanity, but every culture has good aspects as well and deserves to be remembered. The world would truly be a sad place if culture were remembered for only the negative aspects. It is unfair to generalize any one culture because culture itself represents so many diverse people and ideas. It is truly disheartening that the beauty, chivalry and respect of southern tradition and culture have been eclipsed by the images of racism. Similar arguments could be made about the terrible transgressions of almost any race or tradition throughout history.