what kind of music does twenty one pilots make

Twenty One Pilots Finally Flew Back To Us, And Tøp Fans Are Freaking Out

Whatever you may think of Twenty One Pilots, one thing is for certain: they sure know how to break through the silence. 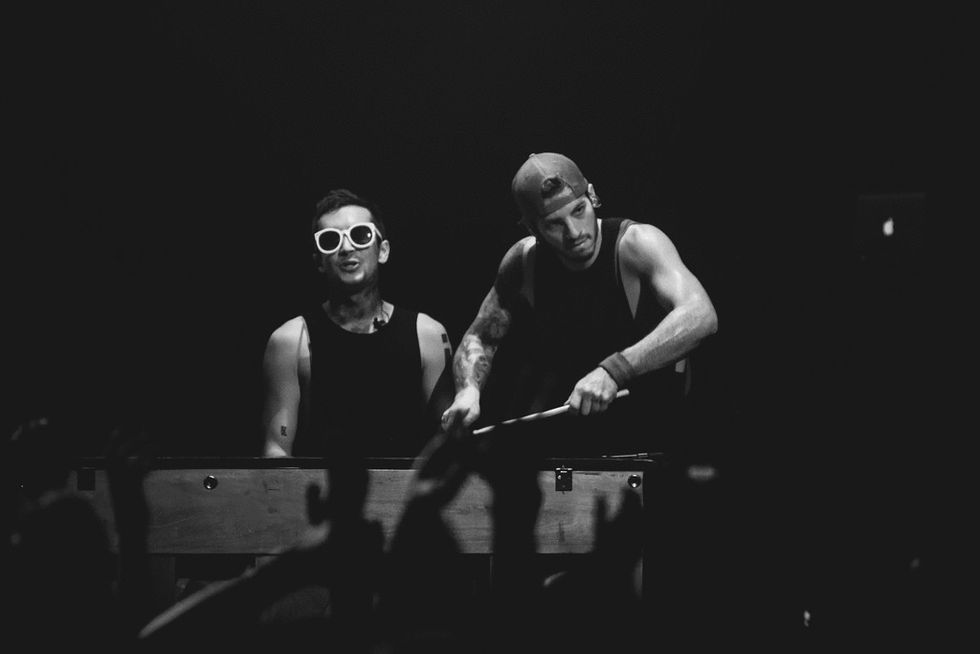 This is not a drill.

This is (also) not rap, this is not hip-hop.

(Be prepared for several of my favorite Tøp lyrics scattered throughout this article. I am not ashamed.)

After three years of "Blurryface" and one year of public silence, Twenty One Pilots has emerged from the woods with two new songs, a new music video, and to tøp it all off (see what I did there?) a tour set that spans over three continents.

I discovered the band Twenty One Pilots in the fall of 2014 after my brother had been listening to them since their album "Vessel" was first released. He's the OG fan of the family.

I can vividly remember the song "Semi-Automatic" popping up on my brother's Pandora radio station (when that was still a thing), and I liked the sound so much that I created my own station for the band.

Thus began a very healthy appreciation for a fantastic band.

Which grew into a possibly unhealthy obsession with the lives of the band members.

When I am active on Instagram, I may or may not follow the sole two members, Tyler Joseph and Josh Dun, as well as several of their extended family members. It's not a fact that I am necessarily proud of, but it's the truth.

I can justify this following, though:

Twenty One Pilots is a unique band with two unique members, no matter what people may argue. While yes, they sound similar to the bands of the same genre, such as Panic!, Fall Out Boy, and MCR, they stand out because of their content.

I fell in love with the band because of the lyrics.

When I listen to music, I listen to the words in equal appreciation of the instruments. It's why I have a hard time listening to most of the music on mainstream radio stations (call me a hipster): while there are definitely exceptions to this formula, most pop songs are generated for quick consumption by the listeners and not necessarily for their deep, meaningful lyrics.

This is where Tyler Joseph steps into the picture. With his combination of fast rhymes, lyrical alliterations, and "allegories" or extended metaphors (thanks, English 11!), Joseph sings out his vulnerability, which connects with his fans - a majority of whom are carrying their own stories of suicidal thoughts, depression, and anxiety.

Check out these verses from one of his older songs "Isle of Flightless Birds", a personal favorite of mine:

"How frustrating, and so degrading, His time, we're wasting
As time will fly by and the sky will cry as light is fading
And He is waiting, oh so patiently
While we repeat the same routine as we will please comfortability..."

I'm skipping a couple lines that are really awesome, but here is the kicker:

What are you living your life for?

We are easily distracted by the stuff that will, in the long-run, mean nothing; it is literal "stuffing" from a stuffed animal that is added to cushion our lives and distract us from those unwavering thoughts of loneliness, but here's the thing- stuffing cannot keep us going because stuffing does not provide life.

What does provide life is found in the Bible: Jesus. He provides life, and He makes our souls matter when we turn to Him. We are valued when we allow Him to transform our lives from dusty mugs to fragile jars of clay that hold a pretty awesome treasure on the inside.

God loves you. Yes, you, who may not feel valued by the "stuffing" around you. God created you with a soul that can recognize the good and evil in this world and that can choose to turn to the God who is good.

Twenty One Pilots does not call itself a Christian band, but the members are missionaries in the field of music. They challenge their followers to recognize the dark pull of isolation, and they tell them to "fight it, take the pain, ignite it." They offer the choice of living a life of purpose, a life that will often fight against the darkness to run towards the hope in the end.

So, fellow Tøp fans: are you ready for this new album? With a new album comes a new era of fandom and a new lyric book so we can cheat on what Tyler is really saying.

There's nothing wrong with that, though; it's good to understand the words that we hear.