The Truth About Eating Disorders, From Someone Who Struggles With One
Odyssey

The Truth About Eating Disorders, From Someone Who Struggles With One

It's time to talk about it. 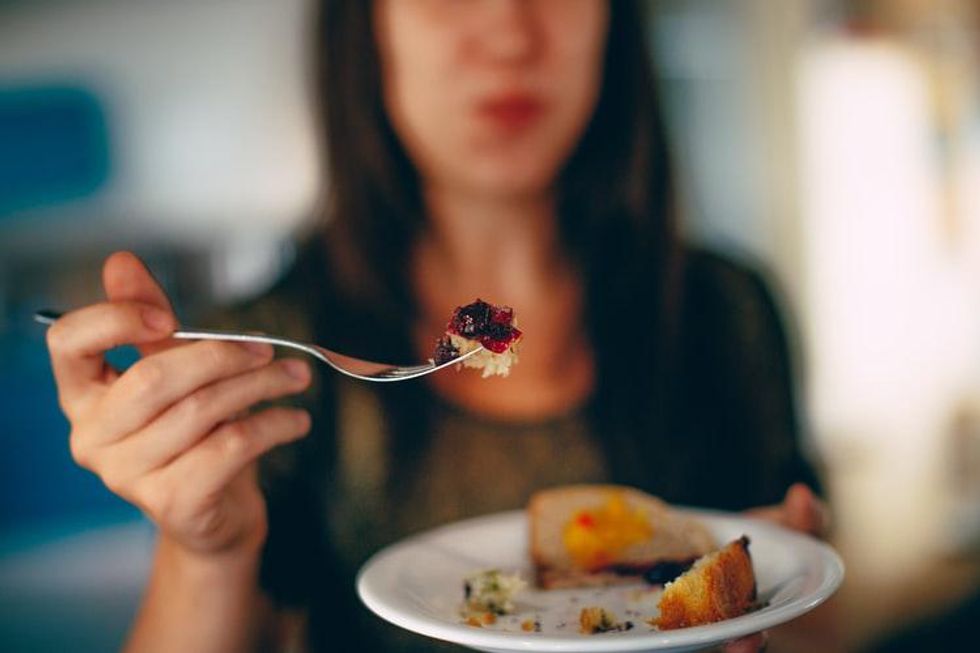 Trigger Warning: this article discusses topics that may be triggering for some readers. Eating disorders are competitive and while I have done my best to avoid causing any potential harm to anyone who ignores this warning, please do not read this article if it could negatively affect you.

It's breakfast, and I know my stomach is empty, but the thought of food makes me physically sick. I reach for another bite at dinner, but someone at the table says that they think the food isn't their favorite, and I have to put down my fork. My friend brags about not eating any food today, and I burst into tears the second I'm alone because I had breakfast. I start to panic after eating and run to go throw up.

This has been the reality of my last year.

Eating disorders are simply a spectrum of psychological conditions that cause unhealthy eating habits to develop. Obviously, they can get incredibly serious, and even deadly, but just because someone doesn't look like the pictures we saw in health class it doesn't mean they don't fall on the spectrum.

And that means eating disorders are a lot more common than you may think. In some groups I'm a part of, the majority of girls quietly suffer from some form of an eating disorder, something I only began to realize when I started to be outspoken about what I was going through. The second I began sharing, something that I needed to build up a lot of courage to feel comfortable doing, other people felt comfortable sharing with me. The realization of knowing so many people were dealing with the same horrible reality I was broke my heart.

But then, I thought about it. I know just as many people suffering from depression, if not more than I know dealing with eating disorders.

I've also struggled with depression, and despite knowing the dangers of that illness personally, it is significantly less concerning to me when someone tells me they have depression over telling me they don't eat.

For one thing, most people only think of the extremes of an eating disorder, because (at least in my experience) we were never taught to see them as a spectrum or sliding scale. It was severe or nothing.

Secondly, depression can be talked about in a way eating disorders are not. I can joke about being depressed with other depressed people, which seems to be the majority of people I meet, and we all laugh like we're part of some comedically horrible club. But eating disorders are never talked about the way depression is. They're not normalized in any fashion, so joking about and relating to them is societally taboo.

Having normalized talks about my depression helped me feel like I wasn't alone in what I was going through. When things got bad I realized so many others were dealing with it too, and I felt like if they could, I could. Normalizing discussions about mental illness allows people to focus on getting better instead of worrying about judgment for struggling. And yet the discussion around eating disorders is closed.

Granted, and this is important, eating disorders are an extremely competitive disease, so normalizing discussion around them has to be done appropriately. In all honesty, I was spurred to write this column after a really horrible personal relapse yesterday. I moved to college about a month ago, and have been slowly getting better and better, but several friends yesterday boasted about not eating, and it unraveled a month's worth of progress in a matter of ten minutes. When normalizing talking about eating disorders, it has to be done in an uncompetitive manner.

It simply means opening up a dialogue so that more people are aware that it's a spectrum, not just the extremes. It means helping people understand that they may be suffering on the spectrum of eating disorders, giving them a place to work from. It means making the subject less taboo so people feel comfortable sharing what they're going through with others who can help them. And above all, it means helping those who are suffering to get the support they need.

It's hard to get help if the subject is taboo. However, if we were to open up a dialogue about the many different faces of eating disorders, more people might be able to feel comfortable reaching out. Knowledge is power, and generating productive conversation could be the first step towards support for so many people.

Food is fuel for our bodies. It is delicious and fun and, above all, a basic human need. Please eat the way your body was meant to. To those among us struggling: I know it can be difficult, but I am proud of whatever progress you're making, even if it's small. You can do this. And together, we can all start the dialogue on eating disorders.

If you or someone you love may be struggling from any range of an eating disorder, call +1-800-931-2237 or visit https://www.nationaleatingdisorders.org/help-support/contact-helpline for support.