How Europe will not be heading radically right anytime in the next century due to the controversy the name "Trump" has on the European people. 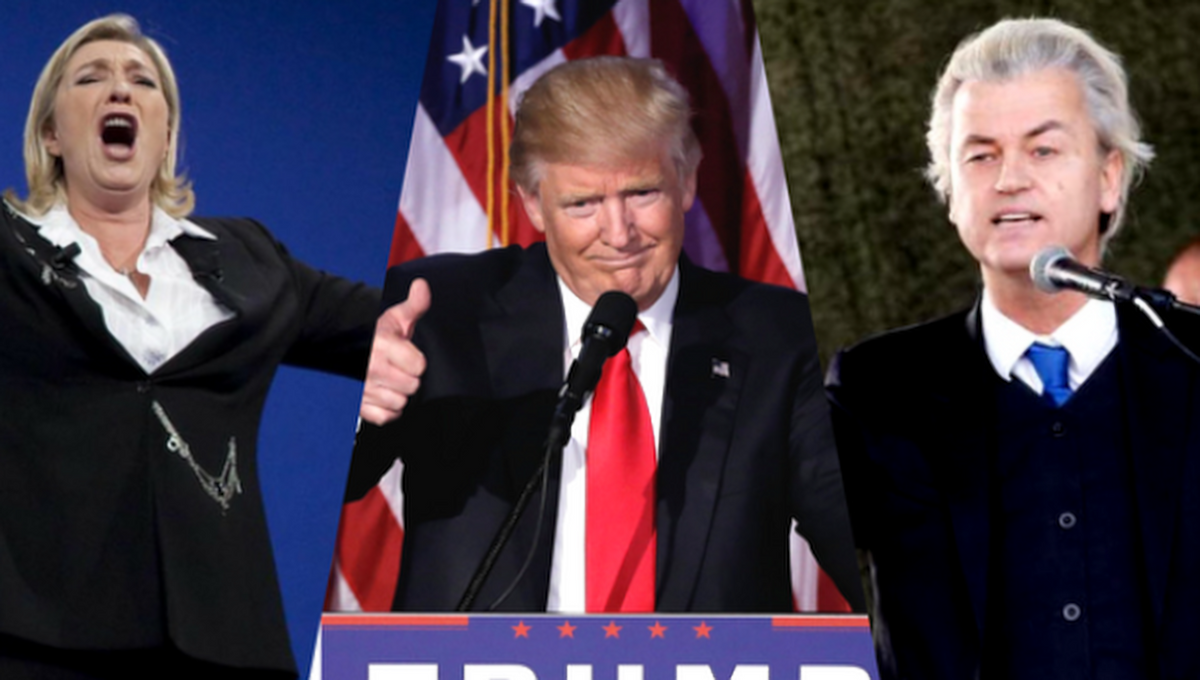 As conflicting cultures shift fundamentals of society gradually throughout the European frontier, the political landscape continues to dramatically change. Europe, known for its progressive ideologies, is now being infiltrated with right-wing and nationalist ideas. The paranoia in European nations such as Britain, France and the Netherlands center around the fact that immigrants are holding a superior stance.

Although the right wing movement is on the rise in Europe, how long will it last?

I’ve been asking myself this question ever since Marine Le Pen pulled through the 2012 French elections with 17.9 percent of the popular vote in the first round. The National Front in France has been trying to tug France farther and farther right, despite having a progressive President.

Le Pen running again to hold office in 2017 seemed like a fairly terrifying thought to some French citizens, but with Le Pen’s promise to give France back to the “French people”, French citizens are biting at the bait the same way Donald Trump set up his campaign regarding national pride. Initially, I thought that Le Pen would pull off a victory in the race to become President, considering the high tensions and coming out on top when the first week of the opinion polls results was revealed.

Geert Wilders, heavily criticized for his anti-immigration policy, did worse than expected against Prime Minister Rutte. Wilders has promised his supporters that he would pull through this election, winning as the underdog. Wilders also compared a Freedom Party victory as Netherland’s Brexit, which is exactly what Le Pen is promising for France.

Although Wilders is promising a lot of the same Trump values, he continues to shy away from his association with Trump because he was frightened it would damage his campaign. In numerous interviews, Wilders states that he does not want to be known as the Dutch Donald Trump. Even after fighting off Trump comparisons, he still loses the election because of common parallels.

Le Pen and Wilders have similar standing grounds when it comes to immigration; however, having a Le Pen victory could be much more far-fetched than imagined before the Wilder’s upset. French progressives were terrified of the 2017 election because they saw the right-wing movement emerging and racial tendencies erupting under the surfaces of ordinary citizens. The French progressives saw frustration in the racists’ eyes and saw what was happening on the other side of the Atlantic Ocean.

So, if Wilders and Le Pen are so similar with the subject of Nationalism, then what exactly separates them?

The scary realization for the Le Pen campaign is that Europe might not be as far right as she thought it was. Wilders proved that with only obtaining 20 seats compared to his front runner’s 33 seats obtained.

Yes, Wilders pushed the Freedom Party into a higher position in the world of politics in The Netherlands, but it didn’t win him the presidency at all. Immigration into Europe scares some, yet taking such an obscure measure to a problem that may not be first on some people’s bucket lists is why Europe is in fact not moving to the right wing as rapidly as once thought.

Europeans are scared of the consequences such actions, like shutting off an entire region, will cause them. President Trump’s travel ban has caused 53 percent of Americans to retaliate against the idea of banning immigration from six other nations due to radical ideologies.

Even though there has been a multitude of terrorist attacks on European grounds in Belgium, France and many other nations in the European Union, it would be highly unlikely that some attacks would cause an entire nation’s viewpoint to shift. This is exactly why a lot of anti-immigration candidates in Europe despise Trump because he destroyed the viewpoint of that objective in Europe. Trump is highly undesirable in European nations, making it easier for a progressive candidate to win despite terrorist threats.

Progressive values have been instilled in European minds ever since World War II due to the influence of the Soviet Union in Eastern European countries. Moving away from these ideas wouldn’t take one or two election years, it would take a century. The anti-immigration movement would have to shy away from the Trump image over the next few decades and rebrand themselves the same way Le Pen rebranded the National Front.

More political organizations for teenagers and young adults are aimed primarily towards nationalist ideas rather than progressive ideas considering a majority of older European voters grew up under a progressive and open-border mindset.

The majority of people who voted for Trump are older, working class, Americans while young voters were inclined to vote primarily for a candidate like Bernie Sanders or Hillary Clinton. In Europe, it’s the opposite, most of Wilders’ cult following was younger Dutch citizens.

Generation Z is commonly known as the “homelander” abroad due to being concerned about threats to their respective primary countries. While this homelander trend continues no matter what border you cross, the lines begin to blur and differentiate when you move away from immigration.

Now clearly Le Pen’s following in younger voters is increasing per election but will it be enough? With most adults above the age of thirty leaning more towards the left, a little spark in the youth vote means nothing right now. That youth vote will one day be the majority vote when decades pass and their grandparents and parents aren’t able to vote anymore. The immense issue concerning some French citizens isn’t solely just dealing with immigration but also deals directly with the French economy and how it could prosper like it used to.

Since she placed third in 2012, a poll conducted by BVA showed that although 48 percent of her voters swayed towards the Republican nominee, Nicolas Sarkozy; there was still 24 percent of her voters that said they would vote for Hollande. In addition to this, if people are concerned about this being a replica of the Trump victory, we must consider that Trump didn’t win the popular vote. In French elections, the election is solely based off of the French citizens’ voting pattern.

So, if the American election occurred in France, Hillary Clinton would most certainly win. Yes, of course, there are closet Le Pen supporters the same way there are closet Trump supporters, but France never had a National Front leader before.

Psychologically speaking, change terrifies certain people; having Le Pen control a country with interesting foreign relation issues is a bold move. President Trump takes influences from both the right and the left, meanwhile, the National Front is a face France has seen since the late 70s but has always pushed away from.

Le Pen has given the National Front a facelift from her father’s radical fascist policies. Her father, Jean-Marie Le Pen, received massive criticism for the way he established the National Front party and its viewpoints. Many paint him as a racist and as a Nazi figure due to his words. This will all be hard for Le Pen to recraft and remodel especially after decades of her father being the centerpiece of the political party.

The current French election will display a reverse Trump model. It won’t be about the underdog like the United States 2016 election, but more about having the party older audiences have increased favorability for come out on top. 53 percent of Americans the ages 45-64 ended up voting for the Republican party. In France, it’s almost the same statistics but reversed.

Wilders’ association with Trump might have been what cost him a few seats in his election race because of Trump’s overly negative reception overseas. Even if Le Pen tries to run from these “French Donald Trump” trademarks, it won’t stop the average voter from thinking she replicates his style of campaigning. Both Le Pen and Trump have had controversial campaigns with major backlash and because of these similarities, there’s no shot she could pull off a monstrous win or even a win at all.

The Fillon and Le Pen election race may seem close in opinion polls, but when it comes to actually voting, the tables may turn. Clinton saw the light when she had the positive side of almost every poll in the country, yet she ended up losing the election.