To All Of The Transphobes
Odyssey
CurrentlySwoonLifestyleHealth & WellnessStudent LifeContent InspirationEntertainmentPolitics and ActivismSportsAdulting
About usAdvertiseTermsPrivacyDMCAContact us
® 2023 ODYSSEY
Welcome back
Sign in to comment to your favorite stories, participate in your community and interact with your friends
or
LOG IN WITH FACEBOOK
No account? Create one
Start writing a post
Politics and Activism

To All Of The Transphobes

I'm not threatening your masculinity. Promise. 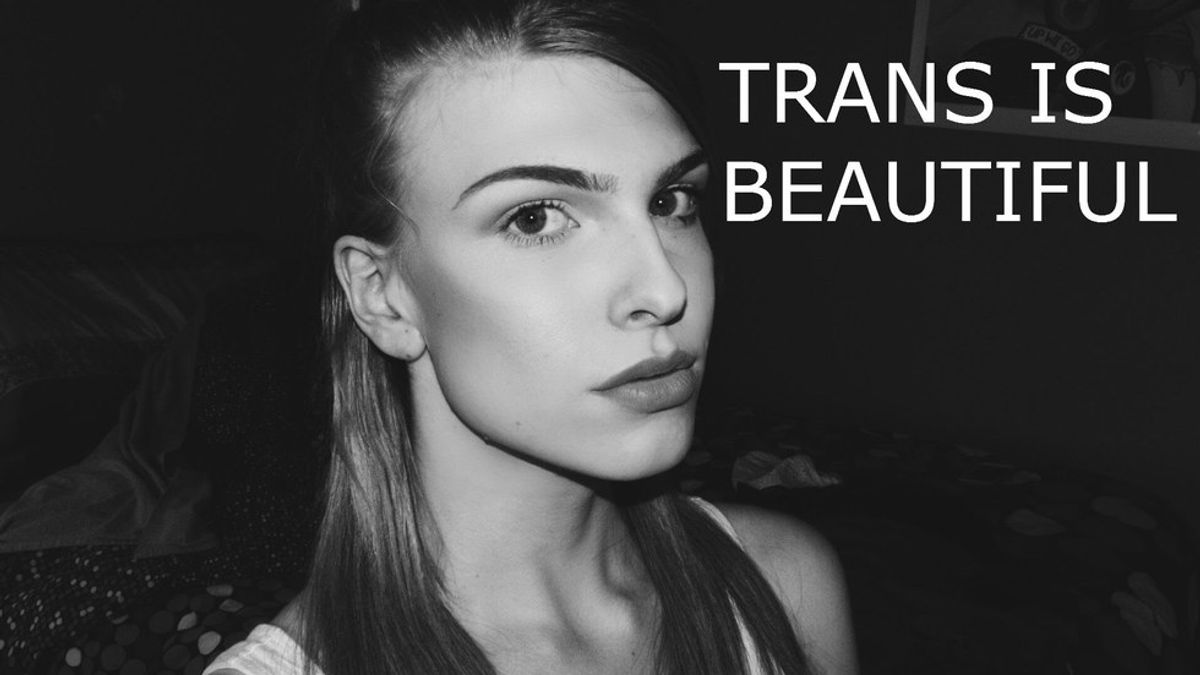 I was born a girl, but I'm not. Being transgender is probably one of the hardest things I've ever had to be. Don't get me wrong, I'm happy to be trans. It's harder than I ever imagined, though. Gender binaries are deeply ingrained within society, but in reality, these binaries don't exist.

Also, sexuality and gender have nothing in common. I would just like to point that out. And small story time... I was tagged in a Beautiful Woman Challenge on Facebook. And since I don't identify as a woman, I untagged myself. But, silly me posted a status about it, which led to this beautiful thread. So, I would like to say a few words.

Too all of the ignorant asshats:

1. I am the only one who can know my gender.

2. I'm really not threatening your masculinity.

As much as you think otherwise, I really just want to be who I am. Whether that be a boy, demiboy, deminon-binary, demigirl, genderqueer, non-binary, gender nonconforming, the list goes on and on. As my friend's little brother says, "God just made a mistake. He put you in the wrong body and you gotta fix it." That's all I'm trying to do, fam. You can take your prescribed Chill Pill now.

There are days I really really wish I was, though. Like now. Being a girl would make everything easier. I wouldn't be misgendered on a daily basis, I wouldn't have to bind my chest, I wouldn't have to worry about my voice being too high. As much as I love being trans and genderqueer, being a cis female would make life 100 times easier. And I really hate admitting cisgender privilege, but it's undeniably evident within this society.

4. You're the one being triggered.

Need I say more? You're the one who's acting like an ignorant pig, and you're the one getting butthurt when people come to back me up and not you.

5. Your argument "There's only two sexes" is invalid.

There is this thing called "intersex" which basically means between male and female. According to the Intersex Society of North America, there are quite a few medical conditions that differ from XX and XY. So I would read more about sexes before you throw that argument out there.

I'm supposed to celebrate coming out, not wanting to go back in. I promise it's not that hard to understand the difference between gender and sex. If you get your head out of your ignorant ass and actually educate yourself, you'll be able to stop sounding like an idiot when you try to defend yourself.