1-on-1 matches are cool, but sometimes, just sometimes, more than one opponent provide some amazing matches. 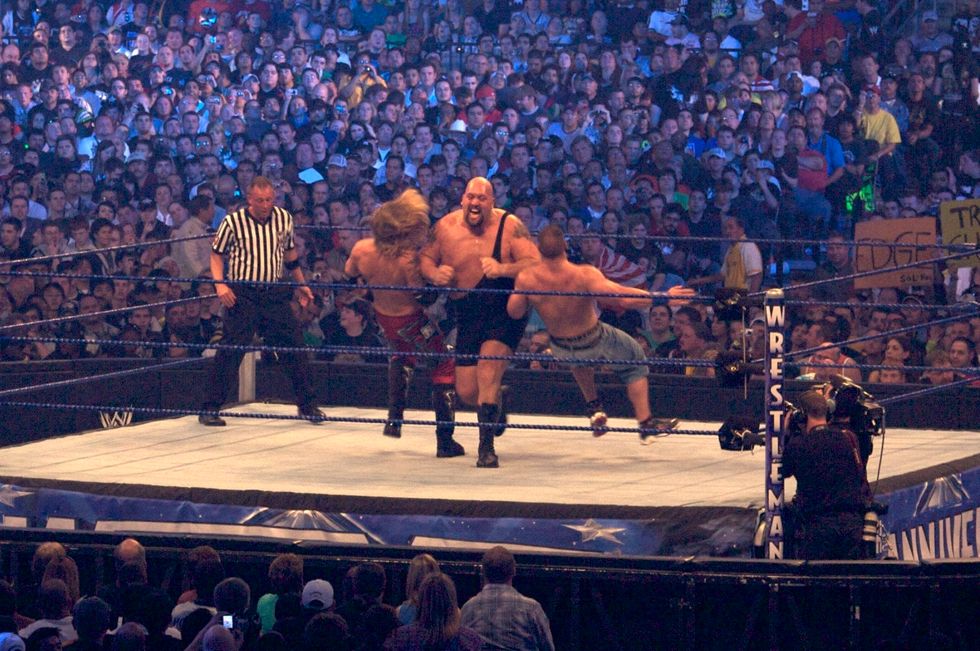 A normal one-on-one wrestling match has its ups and downs. Traditional matches on TV and PPV have included two opponents facing each other for bragging rights, world titles, even the custody of a child (Google Summerslam 2005, my friends). Some of the best matches in history involved only two combatants, but that's not the point here. If it was, I'd just be repeating everything WhatCulture, Cultaholic, and even your own personal lists have been saying, so WHAT A TIME WASTER I WOULD BE. Instead, we'll be looking at some of the best multi-man matches in wrestling history, whether it be triple threats, fatal four ways, even six-pack challenges that have filled our pro wrestling obsessive eyes for years. I've excluded tag-team matches because those can fill almost all ten spots, another reason why I don't wanna waste your time. LET'S BEGIN!

These are the Top 10 Multi-Man matches in wrestling history.

In a way, this match was the reason why I got more into the athleticism of wrestling rather than being a smart mark ranting about the product's entertainment value. The Miz was the wily heel champion heading into what would be the PPV's show-stealer. The opening moments set the pace of each wrestler's desire to win the Intercontinental Championship. Everytime one challenger looked to have it won, The Miz was right there to break it up to save his title. Whoever ended up winning would get a huge ovation, and why? Because each wrestler showed their strengths by waging war over the IC belt.

No, it's not a bunch of guys drinking the most six packs of beer for the WWE Title. And no, you cannot drink along to the match because I said so. At Fastlane, John Cena was trying to get a match at Wrestlemania anyway he could, so he managed to insert himself into a fatal five way and making it a total tornado of a WWE title match for a chance to defend the title at Wrestlemania 34. We had defending champ AJ Styles, a gruesome twosome in Kevin Owens and Sami Zayn, dark horse Baron Corbin, and wild card Dolph Ziggler all going at with a couple of Shane McMahon power-hungry moments thrown in. The match was a typical spotfest but it also told multiple stories of six men trying to prove themselves in order to be the champion of their company, as well as be the one who would get low-blowed by Shinsuke Nakamura at Wrestlemania (you know who it is, you wacky audience).

A ladder match has finally entered this list, and not just any ladder match you simple marks! It's the first Money in the Bank ladder match way back in 2005, which started it all. Chris Jericho, Chris Benoit, Christian, Edge, Kane, and Shelton Benjamin set the precedent on how you do a multi-man ladder match that didn't involve ladder matches. Chris Jericho pitched the idea, but boy, did all six men war for the chance to win a guaranteed world championship match at anytime up to one year. It was also the beginning of Shelton Benjamin's eye-popping MVP performances involving the Money in the Bank ladder matches. Don't blink, please, don't blink. What a barn-burner.

7. Edge vs Kane vs Alberto Del Rio vs Rey Mysterio in a TLC Match for the World Heavyweight Championship (TLC 2010)

Another ladder match (including two of the competitors in #8), it was interesting to see what four of these world-caliber athletes could do with tons of weapons around the ring. Mysterio and Edge reignited their 2002 tag-team tandem while Del Rio and Kane tried to do their best to subdue the babyfaces. In a PPV that didn't excite many, this match sure did do their job. Edge's last ladder match turned to be successful as all four men waged a war for the World Heavyweight Championship.

What's that, a third ladder match on this list? Jake, are you insane?!? YES I AM! NXT Takeovers have managed to provide some absolute thrillers since the third WWE brand evolved in 2014. This happened to be one of them. This ladder match the night before Wrestlemania 34 saw six of NXT's impressive talents toss each other around, host superkick parties, and even join in two insane ladder spots all in 31 minutes for the opportunity to be the first NXT North American Champion. My words cannot do this match justice, so stop reading this, watch the match, and you'll know what I mean.

5. The Undertaker vs Kurt Angle vs The Rock for the WWE Undisputed Championship (Vengeance 2002)

In order for The Rock to lose to Brock Lesnar at that year's Summerslam, he had to dethrone incumbent champ The Undertaker as well as making sure Kurt Angle didn't do the same. Although slow at first, the match turned into a heated contest of near-falls, break-ups, and some of the best spotfest routines ever with a slew of Angle Slams, Chokeslams, and...Rock Slams? This triple threat definitely deserves a look at when thinking about some of the best championship matches in WWE history.

The only TNA match in history to receive five stars from wrestling journalist Dave Meltzer, three young wrestlers waged one of the best wars in wrestling history, and it wasn't even for the world title. It was for the X Division Championship, which at the time was a cross between the Intercontinental and Cruiserweight championships where the best workhorses fought tooth and nail. That's just what these three did. Full of original spots, incredible timing, and amazing chemistry, these three young men proved to the wrestling world that TNA had the potential to create new stars and provide great in-ring competition to WWE.

Oh, you thought this would be number 1? TOUGH COOKIES! Although one of the best ending matches to a Wrestlemania ever, this match certainly has had a host of contenders since. Chris Benoit capped off his 2004 Royal Rumble victory by inserting himself into the already hot Shawn Michaels-Triple H feud over the World Heavyweight title. Benoit, Trips, and HBK showcased how amazing their chemistry was in a match fueled by Benoit's only world title victory. Although shaded in history because of Benoit's final moments in 2007, this triple threat was done exceptionally well.

2. Stone Cold Steve Austin vs Bret Hart vs The Undertaker vs Vader (In Your House: Final Four 1997)

On the cusp of the most important year in WWE history, four very angry and big dudes went at it as if their lives depended on it in a Four-Way Elimination match. The pre-match stipulation was that eliminations could occur via pinfall, submission, AND by tossing your opponent over the top rope. HOW COULD THAT BE DONE? On paper, it looked like the match would favor Undertaker or Vader, but Stone Cold and Bret Hart managed to keep themselves in it before all hell broke loose. If you want to see the Attitude Era's greatest four-way match, here it is.

Trigger warning. SOUND OFF IN THE COMMENTS IF YOU'RE UPSET. I will make my case on why this is the best one of all time. If #2 was the Attitude Era's best four-way, this is the New Era's best four-way. We had four of the biggest, baddest, bulldozing, badasses throwing hand grenades more than punches. Brock's Universal title was on the line in the main event at Summerslam, which many at the time thought was going to last until Summerslam. When you have three big, beefy boys after you, it's tough to be called "The Beast." Lesnar was taking out early by all three before the real war got started. Joe and Reigns were doing their best to keep Lesnar at bay while Braun just...Braun'ed. The spots were devastating, the crowd was into it, and yes, even Paul Heyman got more cheers than Roman Reigns. Of all the multi-man matches that involved skill, athleticism, and great chemistry, it doesn't hurt to have four big guys create carnage all over the arena. It's. Just. That. Entertaining.

What multi-man matches did I miss or didn't rank? Were there any misranked? No? Oh, okay. Cool.