12 One-Liners Every Redhead Has Heard From Complete Strangers

It's uncanny how often these comments keep coming up. 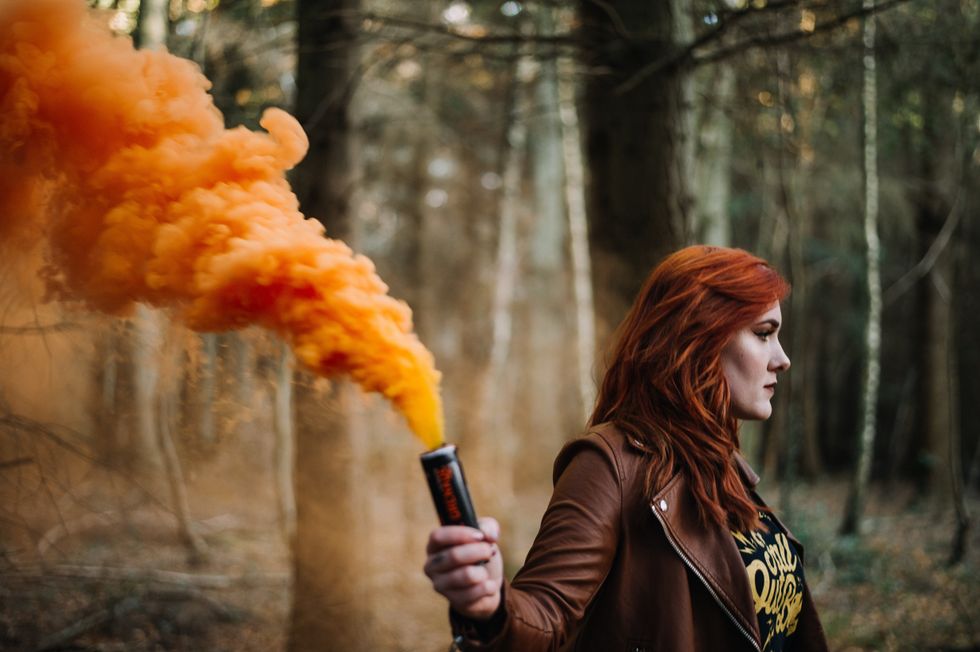 When I'm walking around in public, my hair is undeniably the first thing people see. It's not bright red, but it tends to shine copper in the sunlight, and for some reason strangers (usually older women) are just fascinated by it. They act like I'm the first redhead they've ever seen in their lives. Some of the things I hear are just passing comments, but a few people have actually stopped me to talk about my hair. I didn't realize how widespread of a phenomenon this was until I was talking to a redheaded friend of mine. It inspired me to dig a little further into the issue.

I hope my fellow redheads can relate to this, and I hope the non-redheads reading this will take a hint and get a little more creative (or, you know, just stop):

1. "You're so lucky your hair is that beautiful. I wish my hair was that color!"

Of the comments I get on my hair, these ones are usually the most harmless. They tend to come from other women I encounter in stores or as I'm walking down the street. I never really know how to respond to them, though. What am I supposed to say? "Oh, yeah, thanks, I really won the genetic lottery with that one." It's a little bit awkward, but I'm usually able to recover from it.

Half of the people I meet are weirdly skeptical about the true nature of my hair color. I'm not really sure why. Maybe it's just because red hair is rarer, but I couldn't imagine myself walking up to someone and having my first question be about whether they color their hair or not. Once you think about it in that context, it's a little bit strange.

The other half of the people I meet are very eager to tell me that there's no possible way I could have dyed my hair. I wouldn't know, because I've never tried, because I was simply born like this, but they're more than happy to let me know how truly unique my coloring is. I also never have a clue what to say to this. "Sorry my dude, I guess not all dreams can come true."

4. "Are your parents redheads, too?"/"Where does the red come from?"

I have been asked this question by so many people I can't even begin to count. I think a lot of them expect me to either have two completely redheaded parents, or a strange distant relative with bright red hair and mysterious past, because my usual answer of, "I'm the only redhead in my family," is always shocking. What a lot of people don't realize is that the redheaded gene is completely recessive. Two people with no red hair at all can produce a redheaded baby, and the gene can sometimes lay dormant for generations before rearing its head. It's never as simple as pointing to a single branch of your family tree.

I don't even want to give this one the time of day. If you'd ever said this to a redhead, just know you're the least original person to ever walk the face of the Earth. And you're not funny, either.

It's never fun to be boiled down to one outward characteristic you possess. It's never fun to be called an objectifying nickname when the person could ask for your real name and call you that instead. Maybe it's an easy way to call out to a redhead if you're not sure of their name, but I still feel like there are better and more polite ways of going about it. I don't completely hate this nickname anymore, but only in the cases where I'm using it to refer to myself. Hearing it unsolicited from strangers is jarring and uncomfortable.

People are so excited to tell me about their grandmother or cousin who has red hair, as if I might know them and say something like, "Oh, man, Charlie? I haven't seen her since the last Red-Headed League meeting! How is she doing?" Just another one of those situations where it seems like good small talk in theory. But in practice, I have no good responses to further the conversation.

9. "[Person from pop culture or history] has red hair, too!"

See what I have written above, but change my response to, "Queen Elizabeth I of England? It's been over four hundred years since we talked! I wonder what she's up to these days?"

"Do you have a greater pain tolerance than other people?"

"I hear redheads like their rooms to be warm, is that true for you?"

"Are you really hotheaded?"

11. "Please tell me you've donated your hair before."

I get this question especially because I like to keep my hair short. I know the people who say this are well-meaning, and they think my hair is pretty so they want someone less fortunate to have the option of a pretty wig, but it can sometimes feel like people only see me as a hair-growing factory. I like to donate my hair, and I have done it a few times as I've grown my hair out and cut it short again, but I don't want that to be the only part of my legacy. There's more to me than my hair and what I do with it.

Yup. Creepy as it sounds, I've had more than a few people ask to just feel my hair when they see it. I was once standing in the jet bridge of a plane when the lady behind me saw my hair in a braid and asked to touch it. When I agree, she almost squealed in excitement. It's literally... just hair. I don't think it feels any different than any other hair out there. Just because it's red doesn't mean it's magical. Rubbing it won't grant you three wishes, I promise. I've tried.

From Your Site Articles
Related Articles Around the Web
hair skin nails
Report this Content
This article has not been reviewed by Odyssey HQ and solely reflects the ideas and opinions of the creator.

5 Tattoos Artist That Will Make You Want A Tattoo