The Worst Metaphor You Will Hear Today
Odyssey
CurrentlySwoonLifestyleHealth & WellnessStudent LifeContent InspirationEntertainmentPolitics and ActivismSportsAdulting
About usAdvertiseTermsPrivacyDMCAContact us
® 2023 ODYSSEY
Welcome back
Sign in to comment to your favorite stories, participate in your community and interact with your friends
or
LOG IN WITH FACEBOOK
No account? Create one
Start writing a post
Entertainment

The Worst Metaphor You Will Hear Today

We are all little birds in the middle of Manhattan. 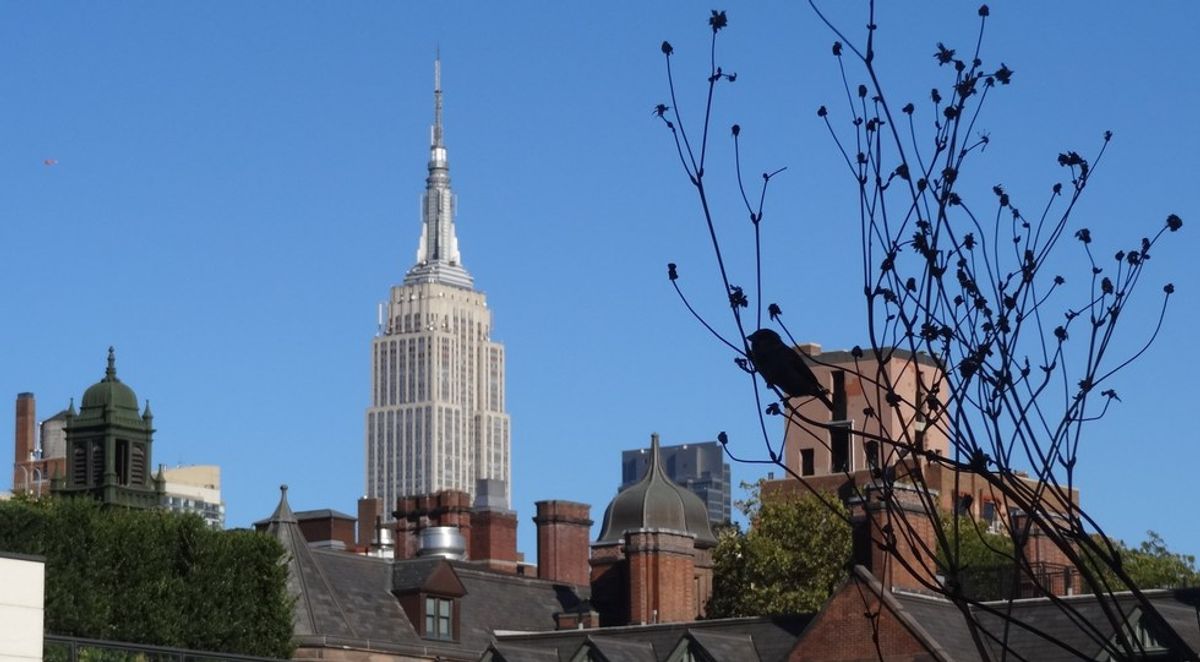 Let me share with you the worst metaphor you will hear today: we are all little birds in the middle of Manhattan. Like I said, it’s a really bad metaphor.

But it’s true! We all probably have had feathers at one point in our evolutionary history and Manhattan was probably the birthplace of the human race considering the ambiguous description many natives offer people (“the city is alive”) which would suggest perhaps a pulsing life force deep within the bowels of the subway… which is surprisingly not the metaphor I was referring to earlier when I mentioned the worst metaphor to tarnish this earth. I’ll explain.

This past weekend, I retired to the Upper West Side for a relaxing three days of shoe shopping and restaurant hopping. Because I am an obnoxious tourist, I also elected to take a stroll on the historic High Line Trail, which is a renovated, elevated railroad at the third-story level that now includes green spaces, playgrounds, and serves as a gallery for social activist art pieces. On a complete side note, I highly recommend visiting, if not for the scenery, at least for the red velvet ice cream sandwiches. However, when I visited, it was not the gorgeous views of the Hudson River triggering a tourist traffic jam—it was a little bird perched atop a chain link fence who for some reason, would not stop singing.

Here is where the metaphor gets bad: we are all that bird, or at least we all could be that bird, if only in our wildest dreams or the most ungodly advances of science. The bird had nothing to do with the High Line or the allure of The Greatest City in the World, but nearly everyone on the trail was stopping to listen to it and take pictures (and I will mention that these were all tourists, most likely from small, suburban towns in which they saw things like birds and grass daily, not mystified Manhattanites who were wondering what a dinosaur was doing in their backyard). The bird was small, beige, and generally nondescript. It was no hawk or eagle or albatross. And yes, despite my tactless generalization that NYC is a concrete wasteland with no nature to speak of but subway rats, there are little, beige, nondescript birds everywhere in the city. So what made that bird stand out from the powerful river and flashing city lights? It demanded to be heard in spite of everything “better” than it.

Consistently, I fall into bouts of artistic doubt, academic-doubt, self-doubt, self-hatred, confusion, existentialism, and just about every other pit someone can fall into. In fact, I believe that I am in a permanent pit of most of those things. It’s because when I walk along the High Line and see another artist’s work glaring down at me from the side of a building, preaching about everything I preach about yet still being better—recognized by whoever owns the High Line and every single person who glances up—I feel powerless and inferior. I start to believe that there is no point to writing anything, because every other writer is better. Why should I force people to read my uninspiring, clichéd, utterly average work? Well, because the little bird on the chain-link fence showed me that even in the middle of The Greatest City in the World surrounded by The Greatest Artists in the World (past and present) someone will notice you, and you will not start to matter because you have mattered all along, but you will start to matter to that person, because they feel just as irrelevant as you do.

You can never know what’s going to grab people’s attention. You can predict fashion trends or other art trends, but you can never really know. Of course some people didn’t even glance at the bird, and they’re probably all the saner for it. But others were struck by the peculiarity of the incessant singing and the crowd of tourists with their backs to the Empire State Building and decided to stay awhile. If you never say anything, never force yourself atop a fence in broad daylight, and instead retract into your shell of perceived inferiority, no one will ever stay and no one will ever be impacted. And I’m fairly certain that everyone, whether they consider themselves to be artists or not, wants to impact people and wants people to stay. Which is why I recommend that everyone (myself included, because I am horrible at taking my own advice… don’t be like me, really) find their fence and sing away, even if your song is just a really stupid metaphor.

Nicole Marie Nigro
Individual Creator
2662
c1.staticflickr.com
Where to start...... Let me start with the cliche that life throws us curveballs and what we do with it is what counts.