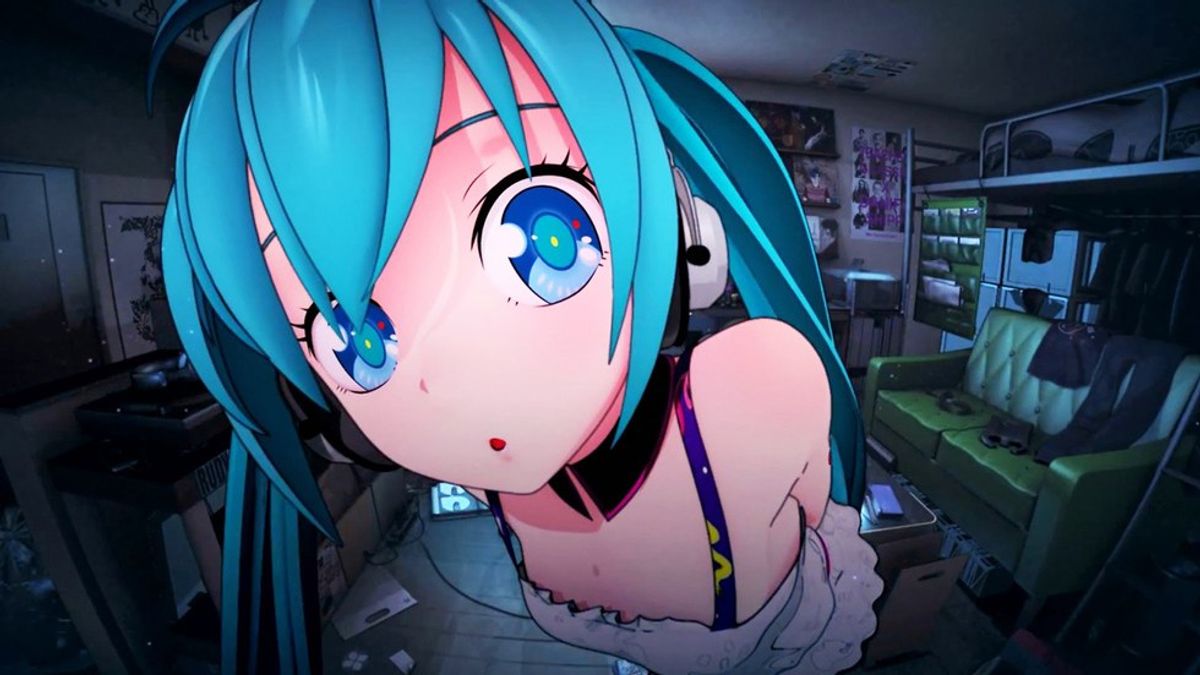 Vocaloid is originally a singing synthesis software created by the Yamaha company. By recording a specific person’s voice through a wide range of sounds and inflections, the program allows a user to create songs by piecing together those sounds and melodies into a voice. The synthesizing process creates a robotic aspect to the voice that serves as an identifying mark for all Vocaloid music. The Japanese language itself, whose phonetic alphabet consists almost entirely of consonant-vowel pairings such as “ka, ki, ku, ke, and ko,” was likely easier to deconstruct vocally than many other languages would have been. The Yamaha company utilized this software to record the voices of specific singers that they then sold for people to make songs with. The first of these Vocaloid sets was called “Meiko” voiced by Meiko Haigo followed by “Kaito,” the first male Vocaloid, voiced by Naoto Fuga. These first two were designed by the Yamaha company and the characters, Meiko and Kaito, were merely made for box art.

The Crypton company then created the next voicebank, Hatsune Miku, voiced by Saki Fujita. Hatsune Miku and the other Vocaloids made after her, Lin and Ren Kagamine and Megurine Luka, were part of the “Character Vocal Series” designed to be full characters. They gave them illustrative designs and fictional traits like height, weight, age, and favorite types of music. Their personalities were left open for fans to interpret and influence with the music they make.

Hatsune Miku has been the most heavily marketed of all the Vocaloid characters and is the most recognizable face among them. She is essentially the Crypton company mascot and her merchandise, including figurines, posters, and other items, have made them massive profits. Her success and popularity, as well as that of the three Vocaloids created after her, led to massive amounts of third-party content. Scores of songs were created using the characters’ voices as well as lots of fan-art and animations. Fan content even includes full songs with animations and dancing in 3D modeled music videos. While Hatsune Miku has made appearances in many other forms of media including many references in Japanese manga and anime, a manga created by the artist who originally designed her, and even her image on a Japanese spacecraft, Hatsune Miku is not tied down to any canonical story line.

Her popularity in Japan has allowed for the creation of many albums of music featuring her voice and even a licensed video game series by the SEGA company, “Hatsune Miku: Project Diva.” However, the most stunning of her accomplishments has to be her concerts. Utilizing holographic projection technology, Hatsune Miku featured as a performer in several live concerts before having her very own solo concerts featuring her and the other Vocaloid characters singing to live instrumentals.

It wasn’t until 2011 that Vocaloid, through Hatsune Miku, would be marketed to the US. The company decided to present her as a virtual singer rather than song-making tool and the popular song designed with Miku’s vocals by the band Supercell, “World is Mine,” was the first to be marketed to International audiences. Here is the song performed live:
Since this international debut she has gained an even bigger following. She has opened for Lady Gaga on her world tour and even appeared on The Late Show with David Letterman to promote her 2016 US tour. Here she is on The Late Show:

.
Miku was pretty constricted in this performance though. She was singing in English which is not exactly her native language and her special effects were clearly watered down for a late night American audience. You could see in her eyes that she was not satisfied as she vaporized herself offstage. Here is the same digital idol performing live in Japan:

Now THAT is what feeds the beast.

Her performances are pretty intense for the most part. This is likely due to how energetic her music is. And also how mellow it is. And how angsty, uplifting, bubbly, and hard rock it is. That’s the thing about “Vocaloid music,” it’s created by so many people that it transcends genre. Vocaloid music is a vast collection of songs and albums. The better known songs tend to be ones that have either been adapted for concerts or feature in the Project Diva games by SEGA, where they have full 3D animations to go with them. These games are intense multi-button rhythm games which are unique in that they actually include various songs created by fans. While these alone form a hefty and diverse collection of music they are still only a sampling of all the Vocaloid music out there. There are so many musicians who have utilized the software that there are countless songs made in all kinds of genres.

Vocaloid is great for creating music because of its precision. Electronic music creators such as Garageband have existed before but they do not have a feature allowing for the electronic composition of voice. Vocaloid allows for precise pitch and harmonies with a voice that remains mechanically accurate over infinite recordings. I personally enjoy Vocaloid music in part because I cannot understand the lyrics which allow the vocals to blend more with the instrumental and not be the main focus of the song.

I find this enhances the listening experience because so much of Vocaloid music is about sound design but there is a cost to not knowing the lyrics. As I mentioned before, the syllabic nature of the Japanese language fits the Vocaloid software well. It allows the lyrics to get pretty crazy while fitting neatly in the music. For example, there’s one about two fraternal twins that are being put in separate rooms since they’re reaching adolescence and they sneak back into each other’s rooms for bad things:


It seems like a perfectly innocent song until you look at the lyrics. Yeesh.

As one can see, the Vocaloid characters are used to tell some very strange stories. All the songs are, as Crypton would have us see it, performances by virtual pop stars. This idea, at least in the west, is something of a hard sell. Geoffrey Cain of Global Post argues that Japanese audiences are more ready to accept Miku as a person due to their history of endowing non-human entities with souls, a cultural practice based in shintoism and animism. It’s noticeable in Miku’s concerts that she is designed to be as believably human as possible, sometimes doing little call and responses of “tadaima” and “okaeri” with her audiences, which are common household greetings which roughly translate to “I’m home” and “welcome back.” It’s even noticeable in certain songs such as “Secret Police”--
where the creator added breaths in between certain lines. It both makes her seem more real and punctuates the song despite the fact that she does not actually breathe earthly air. Beyond that, she has even performed live with other artists, not just opening for them but actually singing together with them in real time. Here she is performing vocals and harmonizing with the Japanese band “Bump Of Chicken” :
Some, however, would not only argue that she is, in a sense, real, but that she is more real than other, fleshier artists. Mike Rugnetta of the PBS Idea Channel discusses the idea that Hatsune Miku is more authentic than “real” pop stars, specifically Lana Del Rey, contrasting the manufactured image of Lana and other pop stars to the literal manufacturing of Hatsune Miku. He argues that Miku is in a sense more authentic because much of who she is is in the hands of her fans which means people are more able to empathize with her, a fictional creation, than they can with a meat and bones singer. Some might call this the “sexy anime Santa Clause” argument thanks to its similarity to discussions of Santa Clause’s existence.
Real or not, Hatsune Miku and her companions represent one of the strangest forms of music out there. Its myriad songs encompass numerous genres and musical stylings and all sound unique from other music due to the robotic sound synthesizing. Regardless of whether or not you accept your new digital pop queen, I highly recommend you give Vocaloid music a chance.

QueenRadhi
The State University of New York at Stony Brook
2986