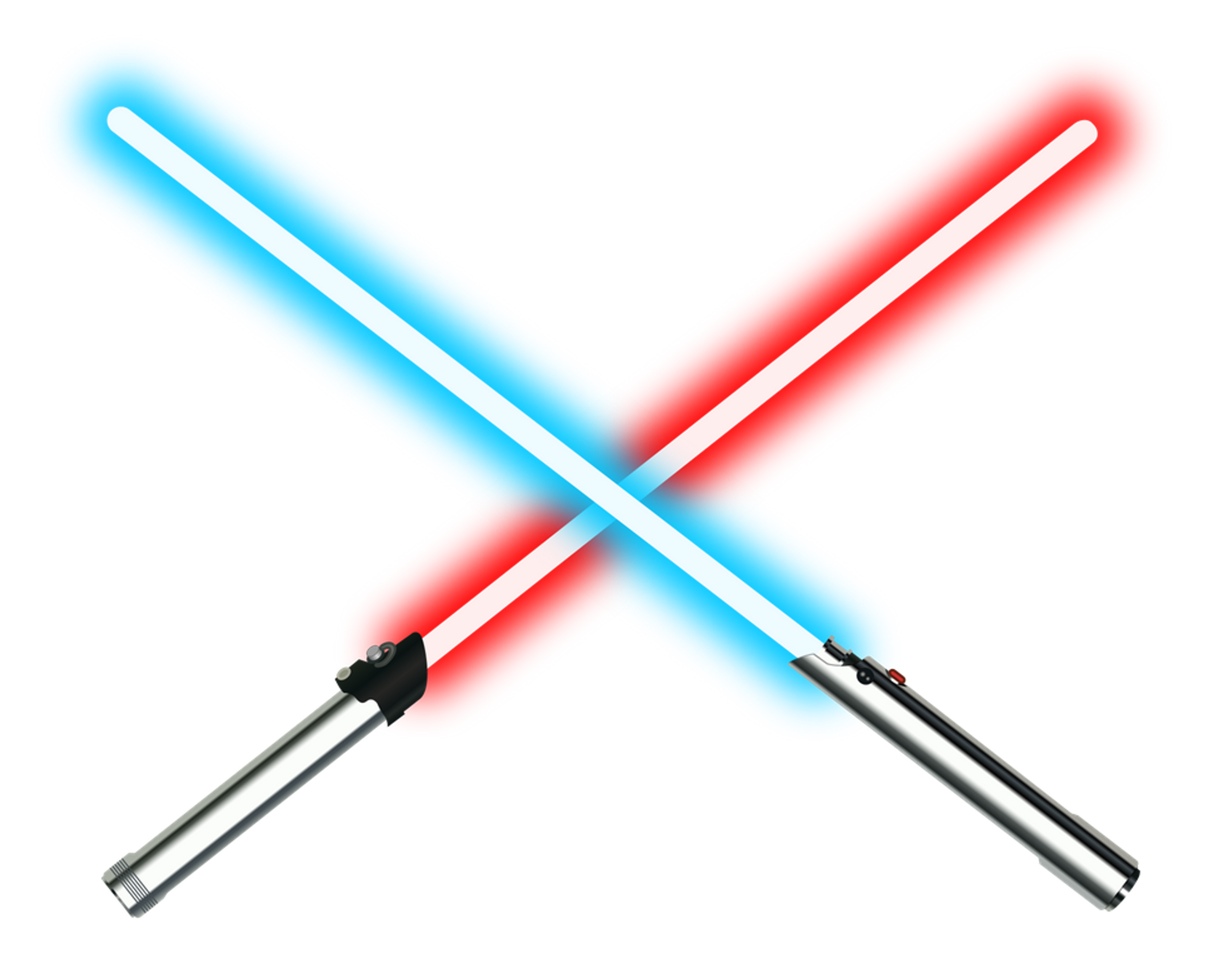 We all love "Star Wars" for different reasons, but one of those reasons is definitely because of the lightsabers. With so many different colors and designs, I thought now would be the perfect time to decide the top five best lightsabers. It wasn't easy because there are so many great ones, but I think I finally got it narrowed down!

Maul's double bladed lightsaber was a total shock to the audiences of "The Phantom Menace". While the movie itself may have not been what everybody was hoping for, Maul's lightsaber more than made up for it. The idea that a Sith, or any force powered lightsaber user, could use a saber different from anything we've ever seen was exciting and promised for more lightsaber tweaks in the future, which has happened. Oh, and who could forget how brutal this saber was killing Qui-Gon Jinn like that?

As we know, Ahsoka Tano left the Jedi Order long ago, but that didn't mean she couldn't still wield some awesome lightsabers! But what would she wield? Jedi use blue or green lightsabers (unless your Samuel L. Jackson) which made people wonder, what would a now non-Jedi like Ahsoka wield? Well as it turns out, her sabers are white to represent her neutrality and in a way display her unwavering connection to the light side of the force. Whats even more cool is how Ahsoka got her lightsabers to become white. As it turns out, a dark side user once owned these sabers and their colors were red, but the crystals changed to white once Ahsoka came into contact them, forever bonding with her as her lightsabers. Sounds a lot like the wands in "Harry Potter”!

The Dark Saber was an ancient Jedi lightsaber that was black and looked nothing like the lightsabers we know. This saber has seen a lot of action. First, it was taken from the Jedi Temple by a Mandalorian, then Pre Vizla used it and eventually Maul killed him and Duchess Satine with it, and now it lies with Sabine Wren who uses it to lead her people. Thats right, for Mandalorians this lightsaber is actually a symbol to represent the alpha male (or woman) and the person who wields it can command all Mandalorian warriors. Somehow with significance like that, I don't think we've seen the last of the dark saber.

Whats so unique about Kylo Ren's lightsaber is the hilt. It has a cross guard on it which no lightsaber has had before and was used by Jedi long ago. This saber is a perfect example of how Maul's double bladed saber paved the way for more lightsaber designs down the line. We'll be seeing more of this saber in future movies and should expect to see it cause a lot of destruction. Hell, it killed Han Solo! Fun fact, Kylo Ren's kyber crystal is cracked, causing the unstable flow of energy within the ligthsaber. The blades coming out of the cross guard is actually exhaust coming from the unstable crystal!

Even though this lightsaber appears to be the standard lightsaber we're use to seeing, you can't deny how special it is which is why it earned the number one spot. We've seen this lightsaber handed down generation to generation with Luke and Rey each taking ownership of it. It has battled Darth Vader, Count Dooku, Kylo Ren, and even Obi-Wan and Ahsoka. Though it isn't as old as the dark saber or the sabers that Kylo Ren owns, I think it has more history and has seen more action than any other lightsaber out there. I hope we keep seeing this lightsaber for as long as they keep making "Star Wars" movies whether Rey possesses it or someone else does because this is one awesome piece of history!