No one knows how Toby made it this far... 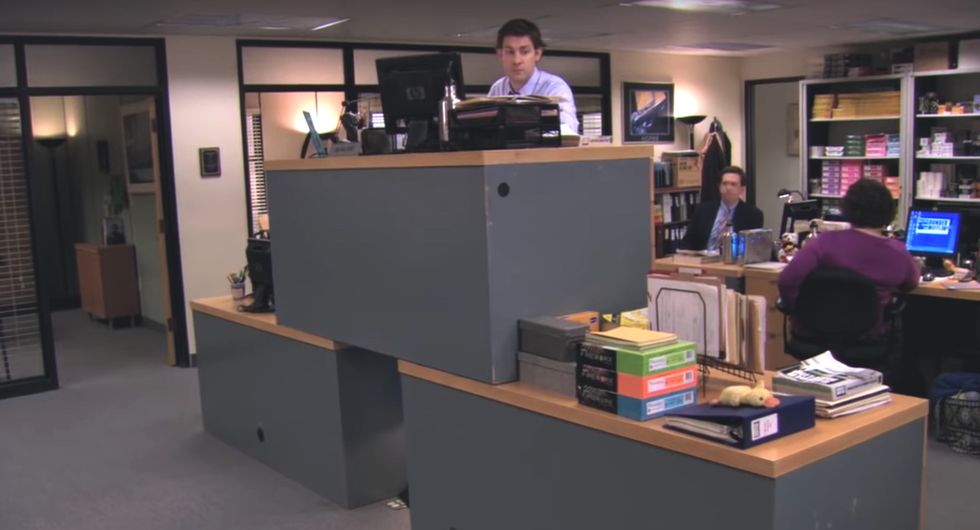 Just imagine, one day, Michael walks in, red-eyed from binging "Game of Thrones" for an excessive amount of time. After spending hours in his office he throws open the door and declares that the staff is going to play a game. He calls it... The Game of Thrones. So original.

They're voted off as it goes. The winner gets the iron throne, which is just his chair which he has just spent the past few hours taping paper clips to. There is naturally a protest from certain employees but Michael really wants to prove he has what it takes to win, so he offers a paid off day the next day for the winner.

Stanley has drive, especially when it comes to getting off work early, but he'd have no interested in this game of thrones. He'd drop out and go back to his crossword.

Gotta be fast on your feet and though Kevin is such a lovable character, he wouldn't last long in competitive situations, unless there is gambling involved.

Ryan would be next in line to drop out of the game because he'd find it stupid and pointless.

And Kelly wouldn't be too far behind. As she'd see this as a way to test the strength her and Ryan's relationship, as soon as he left, so would she, of course pretending not to be disappointed.

Oscar would of course try to participate but end up not really caring as well.

Michael has a lot of ambition, yes, but he'd be quickly eliminated because of his cocky attitude and tendency to not think things through. Not to mention, there's a whole episode about how bad he is at survival.

Andy would give it his all, and his anger issues would get him fairly far, but unfortunately, he would break under the pressure and run away.

Phyllis is stronger and more manipulative than one might think. She comes off as a sweetheart but, mess with her and she can be nasty. She'd almost make it to the half way point but realize she has better things to be doing, like her husband.

Erin has drive, but I also think she may get too scared of the competition and drop out.

Her "Call of Duty" skills can only get her so far...

Darryl can be super intimidating when he wants to be and he is very clever as well. He might not make it all the way but he's just in it for the competition and fun anyway.

Meredith has got the street smarts to make it this far, but unfortunately, drunk mistakes happen and that's precisely what gets her eliminated.

Sorry, Angela, you may be the mother of cats, but eventually, your size and fierceness can only get you so far.

No one knows how Toby made it this far... possibly because he just doesn't care, or maybe that speculated idea that Toby is actually an evil genius has some truth to it.

Sorry Jan, but, not this time.

Jan is a very powerful woman and it'd be easy to see her ruling and being a mother of dragons. However, she does sort of go insane and abusive toward Michael, making her a much less likable person.

She was just staying in the game to make sure Jan was eliminated. She may have even had something to do with it... No one treats her man like Jan did and gets away with it.

The only reason I put Pam this late in the game is that she'll naturally have Jim helping her. Though she is highly intelligent (in most cases) she just doesn't strike me as the kind who would last long in this game unless she had the help of her husband.

Jim knows just how to mess with people and his pranks are a level of genius. After Pam's eliminated though, he'd be soon after. He's more dedicated to her than any silly game for a throne.

We can all admit that Creed just has what it takes to get this far. He escaped the law for years in "The Office" and is obviously a master of disguise and disappearing. His cunning and smarts will have helped him survive this long.

That leaves us with the natural winner: Dwight Schrute. I think from the very beginning of this article we knew who would end up on the throne. If we've learned any from nine seasons of "The Office" it's that Dwight just has the best survival skills and is prepared for anything.

He's come up with high-level pranks, is dedicated to everything he does, keeps weapons in his desk, is a black belt, and the list goes on and on. Clearly, Dwight would win the throne, and treat this as much more than just a game.