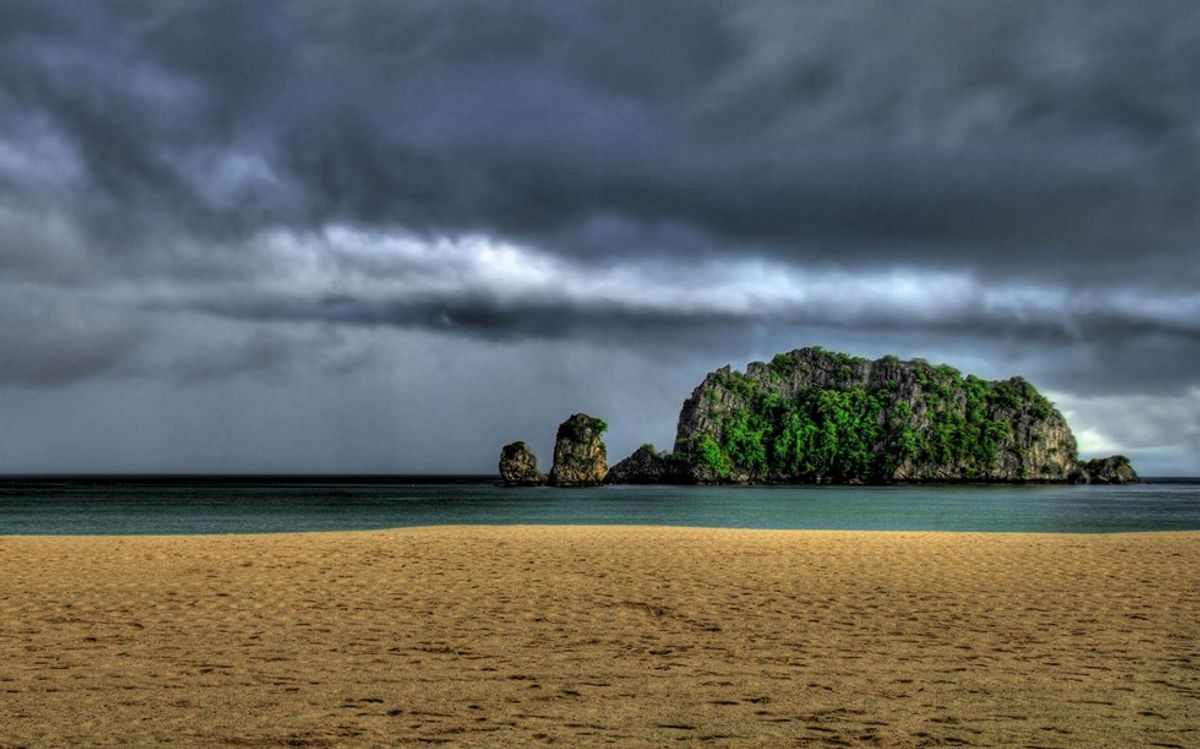 The Island. A destination that is sought after by many; believed to be a refuge and a place of no troubles beyond finding the perfect place to stick your toes in the sand. Everyone has their own image of what they believe the ideal island to be. Located in the Caribbean or somewhere similarly tropical and exotic. Crystal blue waters and soft white sand with a cluster of palm trees to provide the perfect amount of shade.

In the midst of all of the ideal perfection and allure that the island has, we oftentimes forget that the island can be ravaged by terrifyingly dark storms. Thunder rolls and echoes. The clouds roll in like a disease, and rain falls hard like the tears of someone in mourning. You hunker down, trying to wait for the storm to pass, but it is relentless. You sit there for what feels like days or weeks, watching as the waves crash angrily against the shores, and trees are felled by giant strikes of lighting that rush across the sky like the vessels and nerves in our bodies. You are completely powerless to what the storm may inflict, but you are stuck, forced to endure whatever damage it ensues.

The storm could be caused by any number of things; the stress, sadness, anger, or even disease of the ocean. Whatever the culprit, it pushes and pulls the tides further and further inland, making the island a dangerous place. Life on the island is cold and dark. But you have to continue on and let the storm diffuse on its own.

Eventually the storm passes, storms can't last forever. The skies clear and the waves calm again. You stand and stretch, watching the sun peek out from behind the last of the clouds. The air smells as it does right after rain, sweet and natural. You've made it. You hunkered down and you didn't give up on the hope that the storm would pass, and now it has. The island is once again a paradise and you're going to be okay.

And such is life. I am an island that has been ravaged by storms. I stand alone but I know that there are people on the outside, feeling the effects of the same storm that I face. I know I am not the only one. When things get hard you have to hunker down and keep your hopes high. Sometimes you feel alone and like there's no way you'll make it through, but you can do it. The storm will eventually pass and things will get better once again, sometimes you just have to give it time.