'The Good Place' Is A Great Show
Odyssey
CurrentlySwoonLifestyleHealth & WellnessStudent LifeContent InspirationEntertainmentPolitics and ActivismSportsAdulting
About usAdvertiseTermsPrivacyDMCAContact us
® 2023 ODYSSEY
Welcome back
Sign in to comment to your favorite stories, participate in your community and interact with your friends
or
LOG IN WITH FACEBOOK
No account? Create one
Start writing a post
Entertainment

'The Good Place' Is A Great Show

This utopian fantasy comedy is definitely worth a watch! 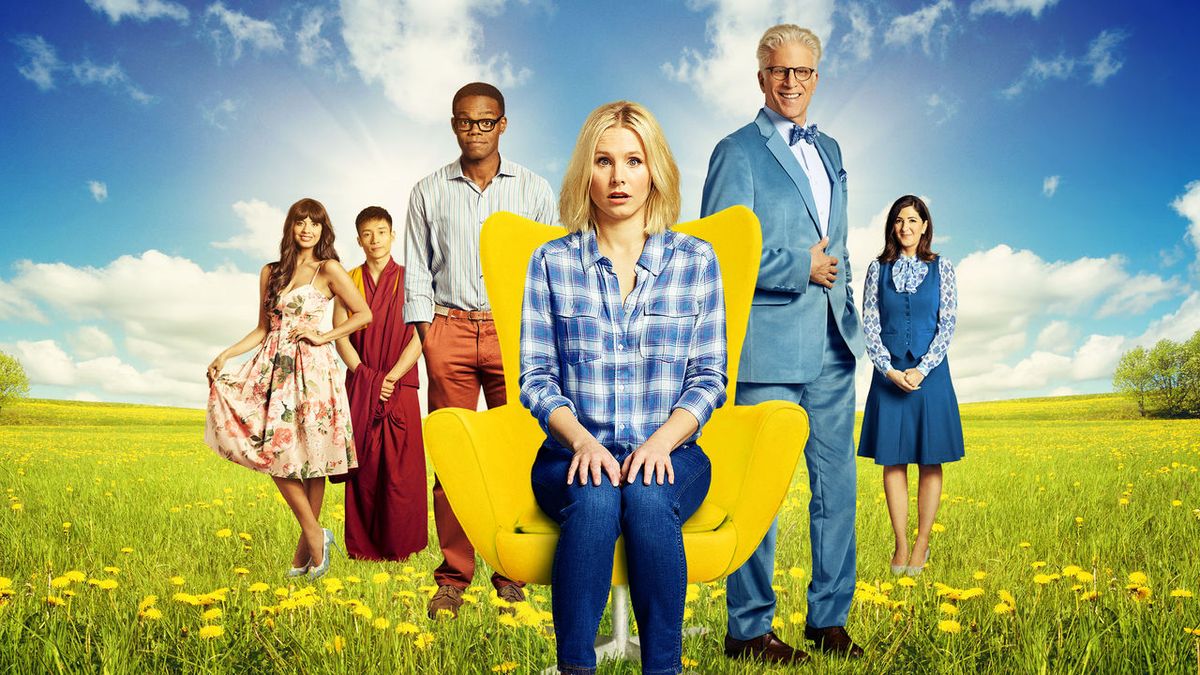 The first Monday of summer vacation, I sat down with my breakfast and looked for a TV show on Netflix that I could watch this summer. I wanted something in the 20-30 minute range that would be ideal for watching during meals. After browsing through countless shows with 45-minute episodes, I finally found a short sitcom with an interesting premise. It is called The Good Place. It first aired in 2016, and it stars Kristen Bell (Frozen) and Ted Danson (CSI). Only the first season is available on Netflix, but the second season is on NBC’s website.

Once I started watching the show, I just couldn’t stop. Also, it’s summer break, so no one made me stop. I finished both seasons-a total of 25 episodes in two days. It’s not my proudest accomplishment, but I’m not ashamed of it either. After finishing the show, I decided I’d like to write a review of it. The show is not completely over, but I have watched all the episodes that have aired so far. Season 2 finished in February of this year. The show has been renewed for a third season that will probably air in September. But enough of that, let’s dive into the show.

The premise of the show is that there is an afterlife divided into The Good Place and The Bad Place. Where you go after you die depends on how many points you earn during your lifetime. You earn points by doing good things and lose them by doing bad things. In order to get into The Good Place, you have to earn over a million points, which is quite difficult to do without being a philanthropist. Everyone else goes to The Bad Place. There are many different ideas floating around about the afterlife, but I personally believe in a Heaven and a Hell. Unlike the system in this show, I don’t believe that where you end up in the afterlife depends on your actions on earth. I believe that it depends on your relationship with God. However, the show does not really touch on that. It is more focused on the astonishingly difficult task of defining good.

The Good Place is about a woman, Eleanor Shellstrop, who dies and finds herself in the afterlife. She is called into the office of a man named Michael, an eternal being in human form. He explains to her that she is dead and has made it to The Good Place, one of two afterlife options, along with The Bad Place. He proceeds to give her a tour of the neighborhood she will be living in along with 321 other people. He shows her the house she will be living in and introduces her to her soulmate, Chidi Anagonye. Once Michael leaves, Eleanor confesses to Chidi that she doesn’t belong in The Good Place because she was confused with someone else who led an extraordinary life.

Pretty crazy, right? Well, she has two options: tell Michael she doesn’t belong and be sent to The Bad Place, or try to earn her spot in The Good Place by becoming a better person. She chooses the latter. Chidi, who was a professor of moral philosophy on earth, agrees to help Eleanor by giving her lessons. While she is in the early stages of improvement, she forms an uneasy friendship with her neighbor, the illustrious and self-centered Tahani (no, not the sauce). Tahani’s soulmate is Jianyu, a Buddhist monk who took a vow of silence that he continues to honor in the afterlife. There’s also a robot-type woman who is like Siri on steroids. She appears whenever you say her name, Janet, and can give you anything you ask for, whether it’s information or a physical object. She evolves over time and it’s fun to watch her grow. As the four main characters get to know each other, friendships are formed, secrets are revealed, and arguments are waged.

All this leads to an insane plot-twist at the end of Season 1 that leaves the characters wondering what their fate will be and who they can really trust. Season 2 explores the aftereffects of this plot twist, which I can’t reveal without giving things away. I can say that both seasons are definitely worth watching. They’re the perfect blend of action, comedy, and fantasy. It’s a quirky, unique show that will keep you engaged until the last second. Also, if you have any interest in philosophy, this show is for you. As I mentioned, Chidi is a moral philosophy professor who teaches Eleanor about ethics. It’s interesting to see how morals and ethics play an important role in the afterlife. Even though the characters don’t always love learning about Kant and Kierkegaard, they are grateful for how useful the information is later on.

Even though I watched it in two days and it only has two seasons so far, I can honestly say this is one of my favorite shows. That’s saying something because I’ve seen a lot of shows. This show is just so captivating in a different way from most of what we see on TV nowadays. For example, it’s utopian instead of dystopian. It’s not focused on death, but on what happens after it. It has supernatural beings, but not zombies or vampires. More like unconventional demons and angels. It’s simultaneously light-hearted and intense. It can be frustrating at times, but that’s a staple of every good show.

If you have some time on your hands and are looking for a new show to watch, go check out The Good Place. Even if you don’t have a lot of time, the episodes are bite-sized and you don’t have to watch them all in two days like I did. In case you’re as indecisive as Chidi, I’ll rate various content to help you decide.

Cursing isn’t allowed in The Good Place, so curse words are replaced with innocent counterparts such as ‘fork’ and ‘shirt.’ The main character fake curses quite a bit, but it’s usually humorous.

There is very little actual violence, but there is some talk about the types of torture that take place in The Bad Place, which can be quite disturbing to think about. There is also an episode with fairly graphic violence, although it is only a simulation.

There is some social drinking, including characters getting drunk. There is also talk by one character about doing cocaine, but no drugs are actually shown.

I would say 13+ just because there are some thematic elements that aren’t appropriate for younger viewers. I suppose pre-teens could watch it if their parents were able to discuss certain things with them.