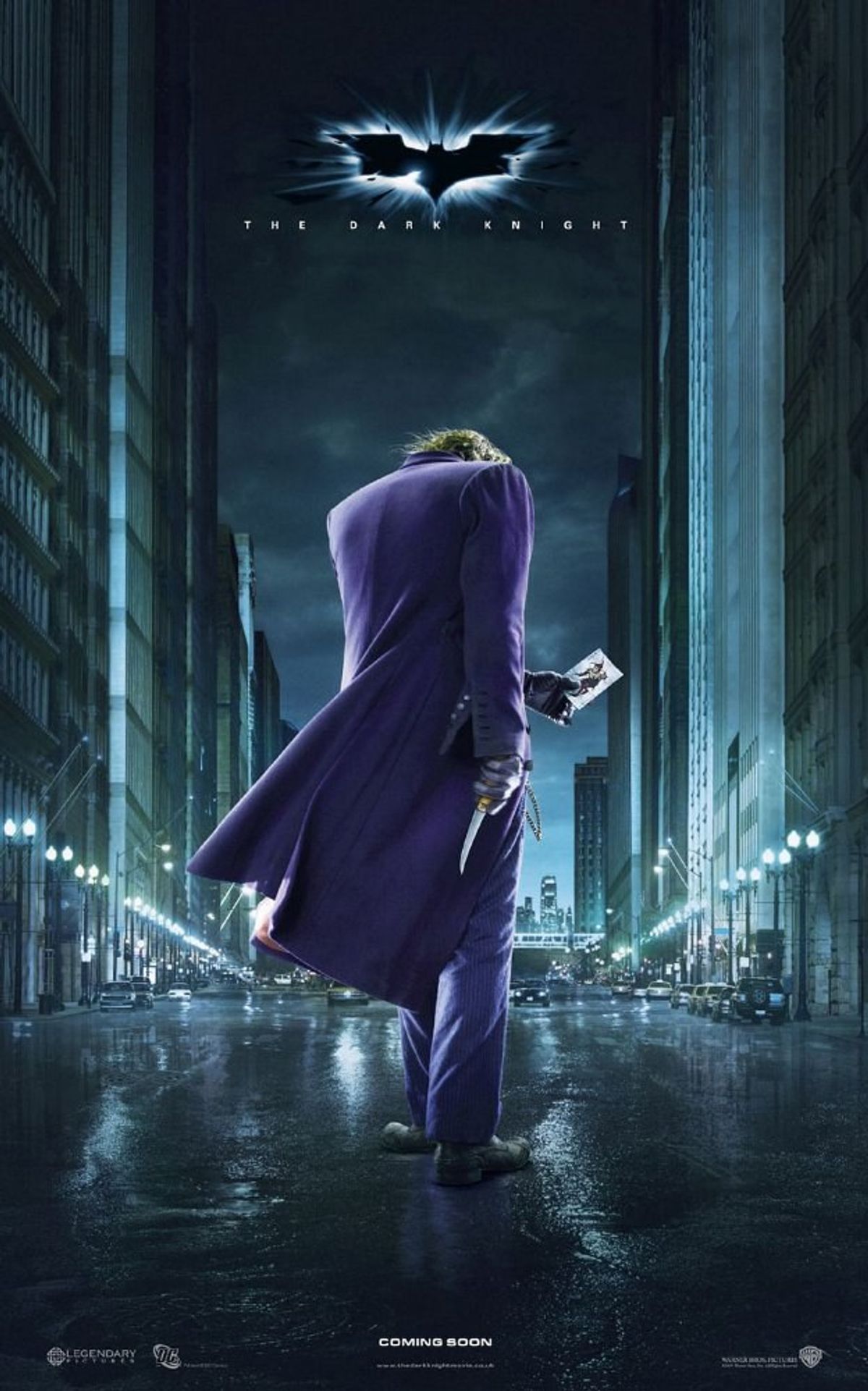 It is the summer of 2008, the upcoming school year will be my first in middle school; although, that's not what is on my mind. The only thing I am thinking about is the most anticipated blockbuster of the year: "The Dark Knight". I remember my parents taking me and my best friend to go see it at my favorite place on Earth - the beautiful Warren Theater in Moore, OK. DK is a masterful piece of art that combines the comprehensive storytelling of Goyer, and the Nolan brothers, along with a brilliant acting style of an even more brilliant cast. By far, the absolute best thing about DK is Heath Ledger's interpretation of the Joker. With that being said, this article will serve as both a mini review for "The Dark Knight" , but also an in-depth look at Ledger's greatest rendition of the most mischievous villain.

Moving from the original atmosphere of "Batman Begins" , DK shows a Gotham City that is just as crime filled as before, in a brighter sense. As I mentioned in my previous article, one of the things Christopher Nolan did differently was the Wayne Tower. The headquarters for Wayne Corp. is now a sleek, all black skyscraper, whereas in 'Begins' , the main building was a regular tower with tan bricks and green cornerstones, along with a massive W on the face. "Batman Begins" had a very dirty/dark feel to the streets of Gotham. The overarching sentiment throughout ”Batman Begins” was a dark and grimy feel. However, “The Dark Knight” sheds a different kind of darkness. The DK's darkness is not "oh, I can't see" dark, it's more of the "Joker makes a pencil disappear without actually using magic" dark. The only mistake I find in this movie was the casting change of Rachel Dawes. In 'Begins', the role was played by Katie Holmes, however, due to certain circumstances, she did not return for the sequel. In DK, Ms. Dawes is played by Maggie Gyllenhaal. I enjoy Maggie G.'s work, and she played the role well, but primarily I am a fan of consistency. Nonetheless, the casting was superb in "The Dark Knight", with the ultimate feat being the casting of Mr. Ledger to play the jokester himself.

Words cannot describe how powerful Heath Ledger's depth into character was in this movie. Nolan and Ledger's relationship began when Chris approached Heath to play the Batman in "Begins" , which Heath rejected and it went on the Bale. During 2006, Nolan talked about the sequel and stated that the Joker would be the main villain and would be played by Ledger. Nolan also went on to say “watching Heath Ledger’s interpretation of this iconic character taking on Christian Bale’s Batman is going to be incredible.” Ledger was cast before the script was even written and he wasted no time immersing himself into the role. Heath even told the movie magazine, "Empire Online", that he had locked himself in a hotel room where he kept a diary and "experimented" with different voices and laughs. He did not go insane or even turn into a psychopath, he only aimed to portray his character the best he could. There are multiple scenes in DK where Ledger improvised his role. A scene, in particular, is when the Joker is sitting in a jail cell and a certain police officer gets promoted. The entire station begins to clap and applaud for this officer, and while Nolan was shooting, Ledger just began to clap sarcastically as if it was planned all along. However, the Joker was never meant to do this, but Nolan loved it and kept the cameras rolling.

The beauty of the Joker is that he is the ultimate villain, especially against Batman. Batman's only rule is to not kill people, but the Joker will not be stopped unless he is dead. There were multiple times in the comics when the Joker would throw himself at the Bat and tell him that he can end everything if he would just simply kill the Joker. Batman would always refuse and have to come up with some elaborate plan to stop Mr. J without killing him. The paramount illustration of this in "The Dark Knight" , has the Joker standing in the middle of a street with a tommy gun blasting away at the Caped Crusader. Batman is driving full speed at the Joker on a BatCycle. Joker is screaming "hit me" as Batman keeps pushing, and in this sense, if the Batman was to hit Joker, J would most likely be severely injured or possibly dead. This act of aggression from the Bat would end everything Mr. J has planned for the rest of the film. However, Batman does not go through with it simply because he cannot end someone's life. This is why J is the arguably the greatest villain because he had the ability and desire to bust the Bat to his limits consistently. But the Joker other people too. The District Attorney for Gotham was Harvey Dent at the time of the Jokers reign. Harvey Dent was known for being the best and brightest of the justice system in GC. Mr. J, to not spoil anything, kills a loved one of Dents. This brings the absolute worst out of Dent and brings him to killing everyone involved in the kidnapping of his beloved. Throughout this entire act in the film, the Joker just brings everyone to their knees. The Joker is known for this unrelenting fury. And Heath Ledger brings this angst to life in DK. Heath played this role so well, in fact, he won the Academy Award for Best Supporting Actor.

This movie, rated 4th on the IMDb's Top 250 (debatably the best film list out there), is quite possibly the greatest superhero movie of all time. Not because Ledger becomes obsessed with a character, or that Christopher Nolan directed the film, but that all these things come together to make an extraordinary piece of art. Along with 'Begins', this movie was an Academy Award nominated movie, for now, multiple awards. Nominated for eight, but only brought home two, that is more than any other movie based on a comic book can say. The reason why I say Heath Ledger's performance as the Joker may be the best acting I have ever seen is because I do not watch this movie and see Heath Ledger, I only see the Joker. No man behind the make-up, only the true villain. This, to me, is as terrifying as it is exquisite. All in all, I give "The Dark Knight" a 10/10.