Why We Need To Teach ASL In Schools
Odyssey

Why We Need To Teach ASL In Schools

Move aside, French and Spanish -- there's a new language in town 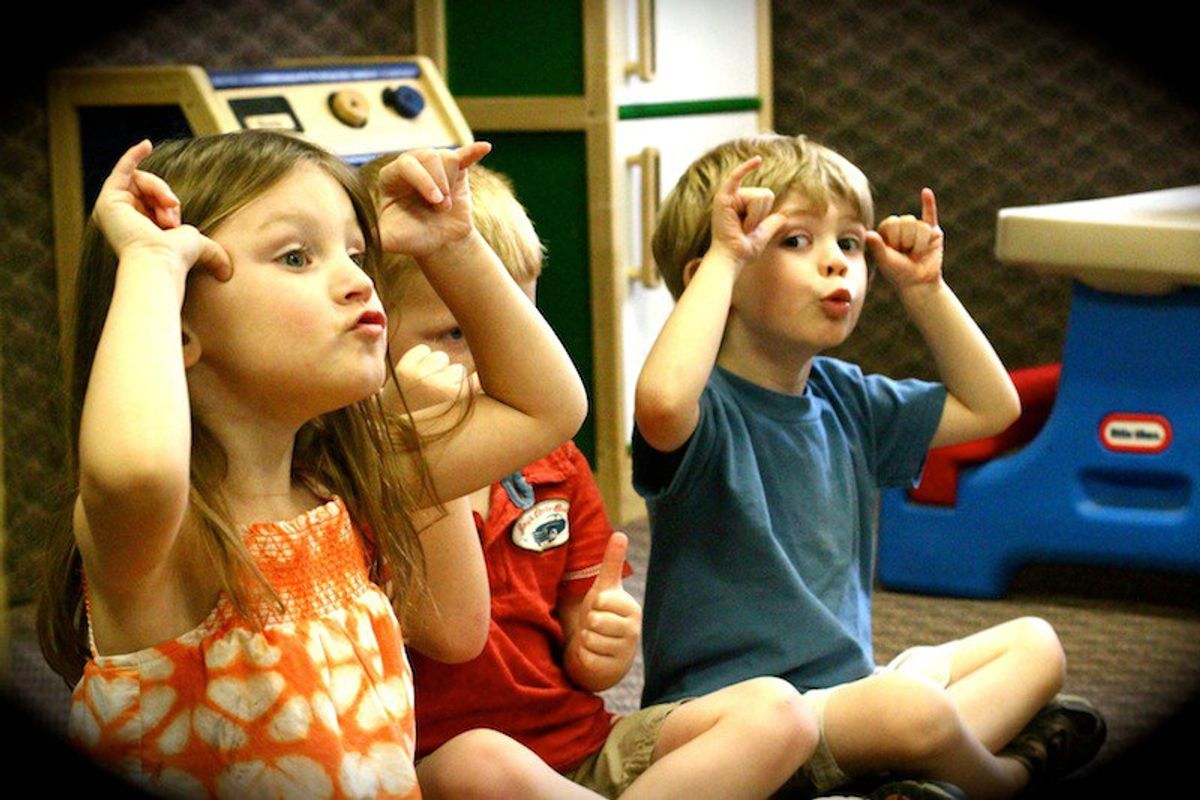 With Common Core being implemented in schools all over America, the field of education is changing immensely. As a nation, we are in the process of an educational transition. Educators and students, alike, are struggling to cope with all of the changes, and it's no secret that Common Core is not popular with most people involved in education. The reason for this discomfort with Common Core is typically the rigidity that comes with it, preventing educators from personalizing the way they teach their students. There seems to be little to no room to incorporate anything that falls outside of Common Core's curriculum. As a nation, though, there are certain things that need to be taught to our children whether or not they are included in a government-made educational system. American Sign Language is one of those things.

Recently, more and more schools (from elementary to secondary) have been focusing on teaching students foreign languages, especially French and Spanish. While there is research that illustrates the importance of teaching our children languages other than English, it is equally as important that, in our curriculum, we start including the domestic language our nation seems to forget about American Sign Language.

As of 2015, 360 million people worldwide are reported to have seriously disabling hearing loss. That is five percent of the world population. In the U.S., American Sign Language is the sixth most used language. Though foreign languages, such as French and Spanish, appear to be more prevalently spoken throughout the world, it is still shocking that there are so many people out there who rely on this method of communication. Yet, it is still uncommon for someone who isn't deaf to be fluent in ASL. If, as a nation, we believe it is crucial for our people to be able to communicate in languages other than English in order to progress as a society, why are we not including ASL on that list of languages to learn? Clearly, it is being used widely enough that everyone is bound to encounter someone who is deaf in their lifetime.

The reason why there are so few hearing people out there who are familiar with ASL is because there is an ignorance that comes with the facts of deafness. Most people I have talked to, for instance, are surprised when I tell them how many times I've run into someone who is deaf. There appears to be this preconceived notion that deafness is rare. Obviously, that isn't the case. Not to mention, those 360 million people who are experiencing seriously disabling hearing loss aren't all deaf. Some are hard-of-hearing, able to hear faintly, but not enough to properly communicate in English. With that in mind, it becomes a bit easier to realize how prevalent disabling hearing loss is both worldwide and in the U.S.

There also seems to be a cultural barrier between deaf people, and what is called "the hearing world" by the Deaf community. As with other instances, being unaware of the Deaf community and who they are is preventing people from being able to coincide with a group that could teach us hearing-folks so much. Most people, unless they have taken an ASL class or personally know someone who is deaf, are ignorant of the Deaf community. This ignorance fosters a discomfort, which I am sure many of those who do not know ASL have felt if they have ever tried to converse with someone who is deaf.

If we mandate that ASL is taught at an early age throughout schools, we can unite those two worlds, and possibly eliminate the intangible distance between those who are deaf and those who are hearing. Teaching ASL to children, while they are young, is our best option as a nation. It is common knowledge that the younger a person is, the easier it is for them to pick up a language other than their native one.

If the concept of being able to have basic communication between two groups of people does not convince you that we need to teach ASL in our classrooms, think of the intellectual and social benefits children will get from learning ASL on a personal level. Learning sign language aides young hearing children, including babies and toddlers, in developing oral language quicker. With ASL, studies have shown that children are able to associate signs with their spoken-English equivalent, helping them to master orally speaking faster, and more efficiently. More research indicates that children who learned sign language at a young age had higher IQs than their peers who didn't know sign language. Further, children who know sign language are more likely to have closer, more affectionate relationships with both their parents and their peers.

Recently, it seems that more and more schools are understanding the benefits of teaching students American Sign Language. These benefits do not just help hearing people communicate with the Deaf community (although this is something we, as a nation, truly need to work on), they help all children grow intellectually and socially on a personalized level, something America's education field could use some help with, thanks to Common Core. With all of this research, it makes one wonder why we haven't mainstreamed ASL into our schools' curriculums sooner. Hopefully, it is just a matter of time before it is common to be fluent in ASL. The sooner we can bridge the gap between the hearing world and the Deaf community, the better.