To Teachers In Oklahoma Who Are Walking Out

To Teachers In Oklahoma Who Are Walking Out

Teachers should be fighting for students' lives. 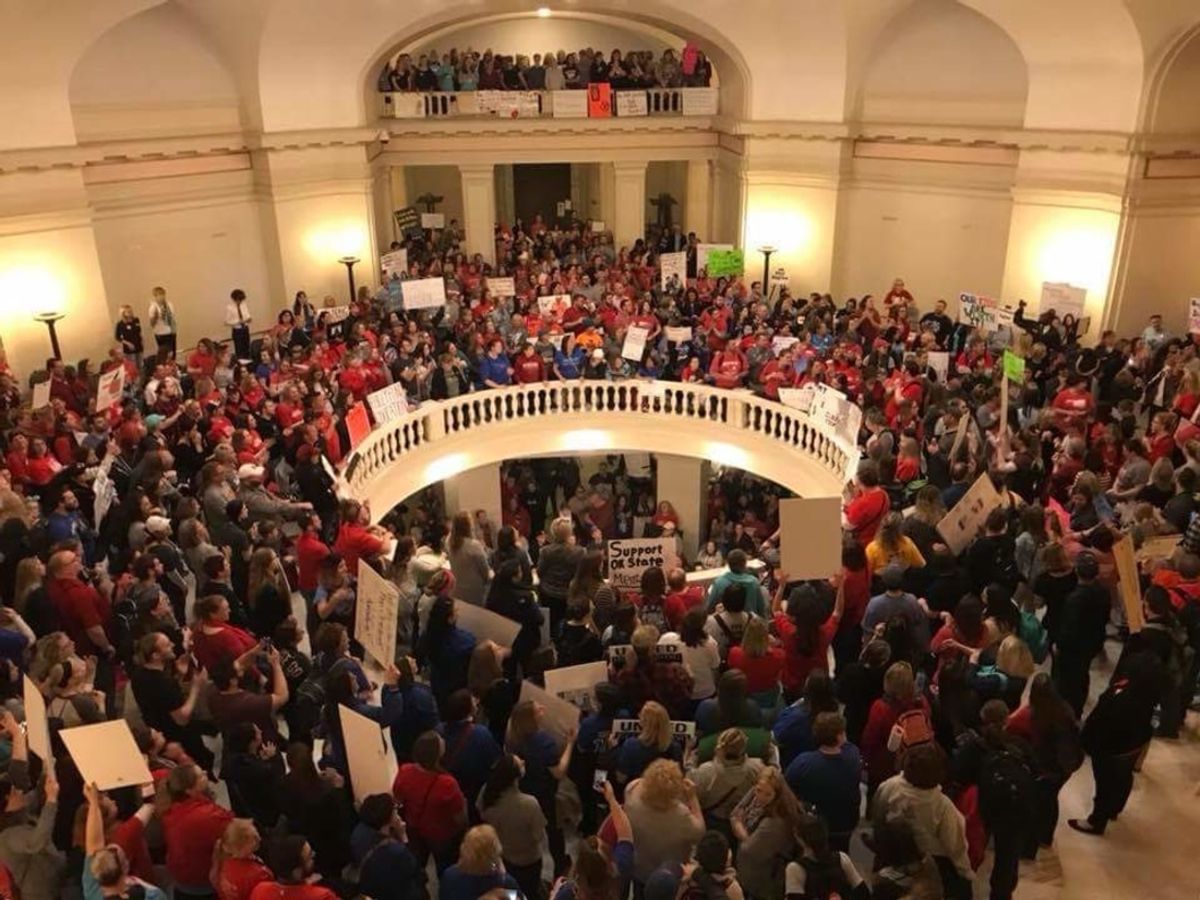 Some of you are just doing this for more money. Everyone always says, "Oh, I'm not in education for the money." But for some of you, that's what this walkout is about. If it were just about your students, you would show up for more than just this week.

When my shuttle drove up to the Capitol, and I saw the crowd, my first thought was: where were you before? Where were you three weeks ago for March For Our Lives?

That event was organized by the very students that you claim to support. That event was about ensuring that your students wouldn't be murdered. That event was on a weekend, so you had no excuse not to go support students. But I guess to some of you, students' lives only matter if you can have your money and guns.

I grew up in a household where both of my parents worked at schools. My mom works at an elementary school and my dad works at a headstart. I am an elementary education major. I know what's going on in education. I'm not ignorant about these issues.

I am in no way saying that schools don't need funding because good God they do. I went to public school where my textbooks were trashed, and I had the same textbook as my sister who is almost 10 years older than me. The issue isn't that I think education funding isn't a problem. My issue is that you believe this is our nation's biggest issue.

Why are so many people coming out of the woodwork and posting on Facebook for the first time in months about this when you couldn't be bothered to speak up about children being murdered?

I know so many educators and education majors who value their Second Amendment rights more than their students. To you, until a gunman comes into your classroom, it doesn't matter to you. You don't care about issues until they start to affect you.

In the midst of the walkout, there was a shooting at the YouTube headquarters in California where four people were shot. No one said a word about this because we were all too busy at the Capitol.

I saw a sticky note on the door of Todd Lamb's office saying something like "This shouldn't be historic." I also saw many protest signs along the same lines.

You know something that should be historic? Shootings. I shouldn't have gotten the notification about the YouTube shooting and thought, "Another one?"

I know that a majority of educators are more conservative in their political mindsets, so I'm not surprised at how much you defend your guns. What I am surprised by are your Facebook profile pictures having the "I Stand With Oklahoma Teachers" filter on them. You are hypocrites.

Also, please, please, please be a better example for the students you say you're advocating for. Half the signs I saw at the Capitol had depictions of Mary Fallin on them. You preach to others and to your students to be kind and not to bully but that's exactly what you are.

Mary Fallin is a terrible person, and I really enjoyed the signs that criticized her critically based on her policy and actions. But as teachers, you should know that we never insult someone based on the way they look.

To all teachers everywhere: thank you. I am full of gratitude for the example of advocacy you are showing your students. I support you. You are showing them how to stand up for themselves and showing them that they deserve better.

Don't be surprised when those students rise up and start to tell you that maybe they care more about not dying in the classroom than the five-year-old textbook they got this year. I bet both of you would rather they had an older out of date textbook to use as a shield against bullets.