What Actually Happened To Tauriel At The End Of “The Hobbit”?

What Actually Happened To Tauriel At The End Of 'The Hobbit?'

My idea of Tauriel's future after "The Battle of the Five Armies." 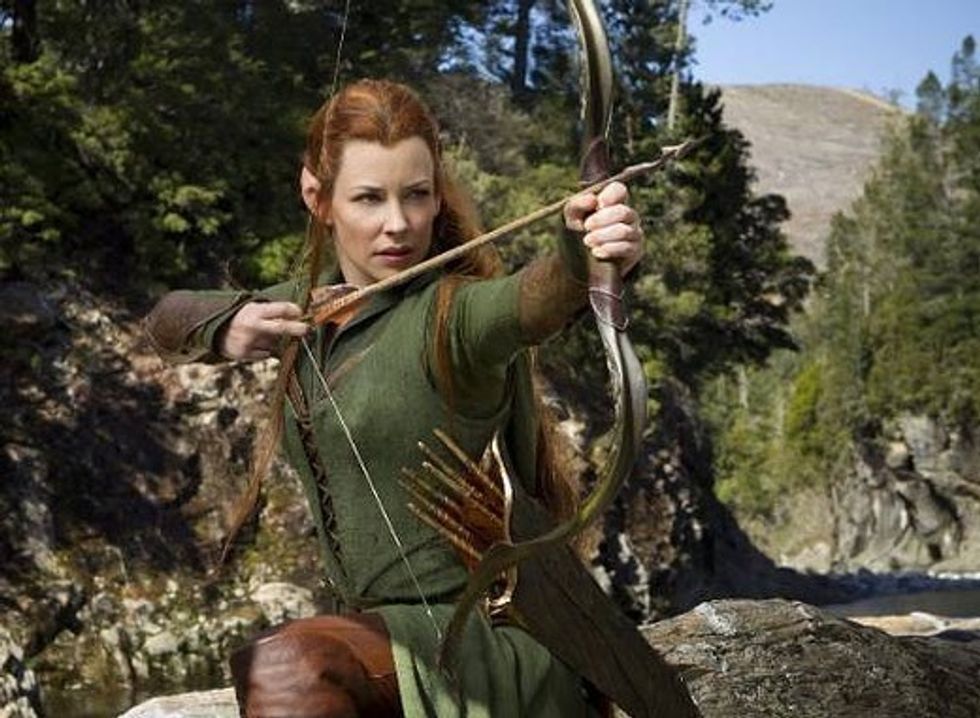 The most controversial character in all of Peter Jackson's Middle Earth films: Tauriel. The female Mirkwood elf was part of J.R.R. Tolkien's books and was entirely made up by Peter Jackson and Fran Walsh. Not only was she not true to Tolkien's original work, but there was also that love triangle...But that's a story for another day.

Please remember that all of this is speculation on my part. I encourage anyone else who is curious to do their own research on it as well by reading through the books, watching the movies, reading online articles, etc. There's certainly plenty of "Lord of the Rings" literature to keep you busy for a long while!

Tauriel is first introduced when Thorin and company are attacked by giant spiders while passing through Mirkwood. She is among the elves that swoop in and save the dwarves only the imprison them immediately after. While the dwarves are locked away, she has a conversation with Kíli and the two fall in love. When the company manages to escape, they are immediately attacked by orcs while still within the Woodland Realm. Tauriel is among the elves who help fight the orcs out of Mirkwood. Kíli is hit with a poisoned arrow during the attack and, as Tauriel learns from a captured orc, will die in a matter of days as a result. Even though King Thranduil orders her to not go after the escaped orcs and dwarves, she defies him and pursues them anyway with Legolas soon following her. Fast forward to after Smaug dies: Legolas receives a message from Thranduil that he is to return but Tauriel is banished. Fast forward again to the Battle of Five Armies after Kíli is killed by Bolg. The last we see or hear of Tauriel is her mourning Kíli, confessing her love, and kissing his lips.

What happens next? No one knows. Peter Jackson never says, but Evangeline Lilly - the actress who played Tauriel - said in an interview that she thinks Tauriel returned to Mirkwood even though she was banished. I doubt that theory for a couple of reasons.

First of all, the elves are immortal and only able to die from a fatal wound or extreme despair. As Thranduil states, "A hundred years is a mere blink in the life of an elf." Because they live so long, grudges can be held basically forever. I find it hard to believe that Thranduil would forgive Tauriel so quickly after her betrayal, especially because Legolas did not return to Mirkwood at the end of the Battle of the Five Armies. Even if she did return, my next point would soon come into play.

In "The Lord of the Rings", it is foreseen by Elrond that Arwen - who is an elf - would die as a result of her love for the mortal Aragorn. Elrond states that after her lover dies Arwen "will linger on in darkness and in doubt... Here [in Middle Earth] you will dwell, bound to your grief... until all the world has changed and the long years of your life are utterly spent."

This is what I believe happens to Tauriel. She loved Kíli. She even says, "If this is love I do not want it." She asks why it hurts so much and begs for it to be taken from her.

If I had to guess Tauriel's fate I would guess that she eventually fades and dies as a result of her heartbreak and despair. Sure, she may have returned to Mirkwood for a time if Thranduil had allowed it, but my guess is that she eventually passes due to the loss of her love.

Sad, I know, but we all knew Kíli was going to die at the end of the Battle of the Five Armies; that's what happened in the book. Part of me hoped that Tauriel would die as well to keep the continuity between "The Hobbit" and "The Lord of the Rings".

Whatever her fate, I personally thought that besides the love triangle Tauriel was a welcome addition to Middle Earth! I liked getting to see another BAMF female elf and she definitely kicked butt!