If You Support Kavanaugh, You Are An-American

To Anyone Who Supports Brett Kavanaugh, And The Administration That Backs Him

While I doubt the majority of you that support Kavanaugh or Trump are pro-rape, you are Accessory After the Fact. 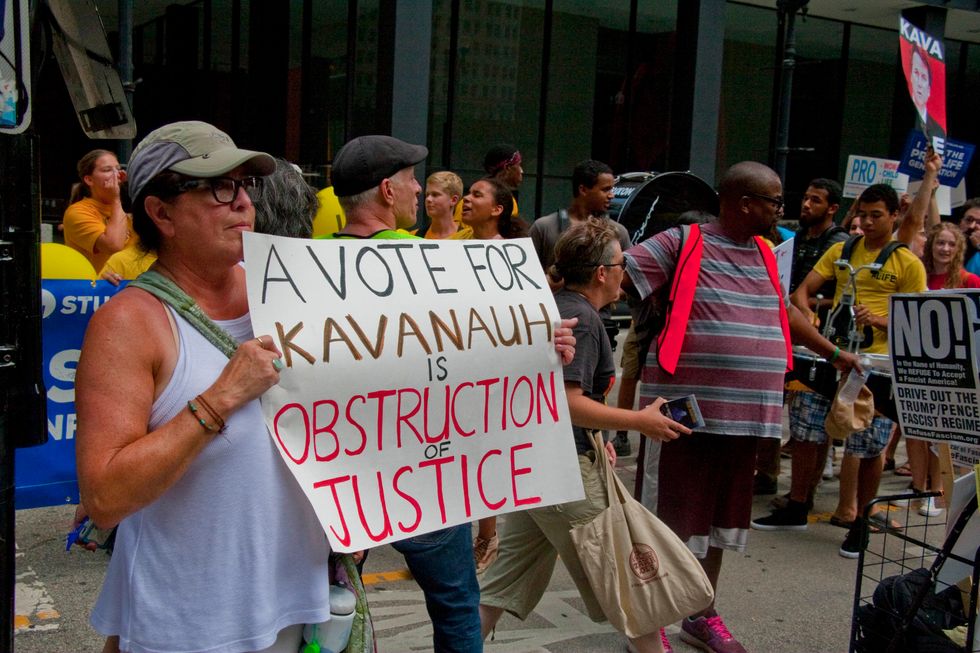 With the coronation of Kavanaugh to the Supreme Court, we are seeing a deeper divide between Americans. The problem is: there should be no divide. At least I don't see any room for one, as I abhor rapists.

The current counter-argument to those that oppose Kavanaugh's nomination, and election, to Supreme Court Justice is that he is in fact not a rapist, but a victim of false accusation. The thesis of those supporting Kavanaugh is that Dr. Ford is a paid liar who came forward to discredit him and deny the Republicans a chance at having a Supreme Court majority.

I will admit, I had no idea who Brett Kavanaugh was until this trial. I will also freely admit that, since he was a Trump nominee, I was immediately biased against him. "There!" you're saying, "You just admitted it! You're biased! You wanted him to be a rapist!"

For Kavanaugh to be a rapist would mean that he had to have destroyed someone's life due to him not being able to control his sexual impulses. And that is what happened. How do I know, in addition to Kavanaugh's own behavior, and detail of Dr. Ford's testimony? When I was in my teens, I stole my dad's car while he was away at work. He had a car, and my mom had a car. She was gone for the day, so my father had used her car to commute. I got the car home safely before he was off work. He came home, then remembered he needed to pick something up (I can't remember what) in town. He noticed that the speedometer was significantly changed from when he had last used the car. (Yes, my dad kept track of the mileage. Probably still does.) He confronted me about using it, and I was immediately emotional. I wouldn't answer his questions directly. I shed some tears; I was defensive and angry. I countered with asking Dad why he distrusted me so much. My dad was no idiot, and he saw that I was lying. I saw the same emotions I exhibited towards my dad being exhibited by Kavanaugh towards the Senate inquiry members. I'm no idiot, so I saw that he was exhibiting the reactions of a liar.

When you're telling the truth, you answer questions directly and stick to the point because, well, you're in the right. Kavanaugh deflected answers, acted out violently and emotionally. He showed as much skill at hiding the truth as a spoiled child who got caught breaking the lamp.

When I was about nine I found out my best friend's little sister was molested by a family friend. She was six. All three of our families were very close. We shared Sunday dinners almost weekly. The family of the molester responded with anger towards the girl's family; the girl's family never expressed any anger towards them, at least not as publicly as the offender's family did. They molester's family ultimately moved out of state. The molester never paid for what he did, if you can even pay for committing such an act. There's a lesson there: anger, more often than not, comes from guilt, not in defense of truth. I saw that anger in Kavanaugh. It wasn't the anger of a wrongly-accused man; it was the anger of a coward who was furious he hadn't gotten away clean.

What Trump, his followers, his cabinet, and documented rapist Kavanaugh encompass is the dark side of the American Dream; they stand for everything I loathe: Greed, stupidity, disdain for rational thinking and selflessness, idleness, vanity, and pride. During the Communist witch-hunts of the 1950's, Joseph McCarthy went on a conviction spree, accusing everyone from politicians to filmmakers of being Red, Soviet Union, Communist sympathizers. This spree was well documented, and it seemed like no one was safe from McCarthy's rampage of accusations and paranoia. He was stopped cold, however, when Boston attorney Joseph Welch, hired to defend the U.S. Army against accusations by McCarthy, stopped McCarthy mid-rant and said: "...You have said enough. Have you no sense of decency?" I'm afraid no such phrase could stop the tide of filth we are witnessing out of Washington now.

I can't change your mind if you support Donald Trump or Kavanaugh. Your mind was set long ago, and I have poor power to dissuade you. So, since reason and decency is out the window, and the Senate of the United States has voted in Kavanaugh, and millions of Americans refuse to believe a woman who was raped due to her committing the crime of opposing "their side," and since we don't even care about that obsolete word "decency" anymore, let us all hold hands and say: Fuck the Founding Fathers, Fuck the Constitution, Fuck Life, Liberty, and the Pursuit of Happiness and Fuck the Sacrifices of Those that Came Before Us. You're mad at me for saying it, but I'm just saying it. You live it.