Stranger Things Takes Over Spotify and the World
Odyssey

Stranger Things Takes Over Spotify and the World

Ranking of all 13 of Spotify's Stranger Things Character Playlists 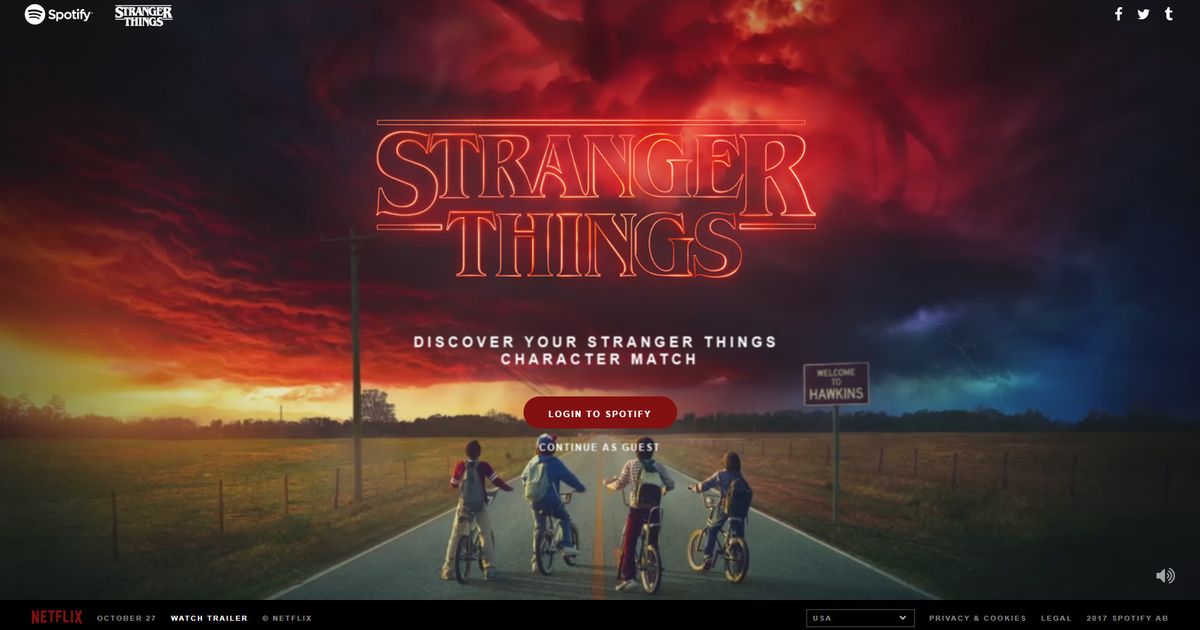 On October 24, Stranger Things took over Spotify. It started with an "Upside Down" theme. If you play either season's soundtrack using your Spotify player and wait a few moments without moving your mouse, your player will transform into a spooky screen with spider webs and a bright flashlight beam emerging from the bottom of the screen.

But the Stranger Things hype didn't end there; on that same day, Spotify unleashed a feature that uses a computer program to go through your music, and assigns you a Stranger Things character and corresponding playlist. I am here to give my definite rankings and descriptions of the 13 playlists.

This is the playlist I was assigned and my definite favorite. It is full of new and old badass techno jams. It definitely gives 80s punk girl vibes, with artists featured on the playlists ranging from the Go-Gos, to Madonna, to Lorde.

This playlist is composed of both contemporary and retro R&B and hip-hop tracks. It's much different listening than the music I find myself associating with Stranger Things' 80's personality and I enjoy that. On this playlist, you can find artists like Chance the Rapper, SZA, and Stevie Wonder.

This playlist is similar to Eleven's in that it is full of 80s punk; however, in the new character Max's playlist, California surf vibes emerge as well. Not only do I think people will enjoy Max as a new character but I think they will enjoy her playlist, with tracks from Pink Floyd, David Bowie, and the Beach Boys, as well.

Much like Jonathan himself, this playlist is an angst-ridden lonely teenager exemplified in music. Big name artists like Radiohead, Depeche Mode, and David Bowie bring these emotions to light. The entire playlist is full of angsty classics and, when in the right mood, can cure a case of some lonely blues.

Will's playlist is comprised with classic rock, starting with the character's favorite song "Should I Stay or Should I Go" by the Clash. Although, not my favorite type of music, the playlist is well-made in that all of the songs are in the same vein, displaying other artists of the genre, like Journey and Bon Jovi.

As stated in the title itself, this playlist is full of heavy-base in the synthetic pop music it showcases. Eurythmics and Howard Jones' "What is Love?" are examples of what this playlist has to offer. This is great listening for a hangout with friends or, as Spotify says, "a 5-hour D&D sesh."

7. Billy's Pedal to the Metal

Like the new character himself, this playlist is packed with roughness, angst, and rage. Guns and Roses, Aerosmith, and Kings of Leon convey these emotions both with contemporary hits and 80s hard rock classics. This playlist is longer than the others at 67 tracks, speaking to the amount of songs within this genre. Overall, if this type of music floats your boat, then this playlist is for you.

I can definitely picture Hopper driving around jamming out to every song on this playlist. Although not my personal taste, it has some classic artists and great songs. From Johnny Cash to the Rolling Stones to Tom Petty to The Who, this playlist is full of big name stars; however, my only complaint is that I wouldn't necessarily listen to all these artists together. I've decided its a new genre: "nighttime drive with an 80s small-town cop."

This playlist is Dustin, Dustin is this playlist. Rather than going for a particular genre or vibe this playlist tried to showcase Dustin. With songs like "Toothless Grin" and "Weird Science," Spotify did a good job picking songs that relate to Dustin, however with this endeavor it lacked continuity and the playlists vibes were scattered. Although cute and fun, it is definitely not the best designed playlist of the bunch.

Nancy's playlist is meant to be an ode to strong girls who "slay", but it really struggles to find that right mix of songs to portray that message. In my opinion it achieves this by including songs like Beyonce's "Flawless" and "Survivor" by Destiny's Child, but misses the mark and message with songs like "Love Yourself" by Hailee Steinfeld and Fifth Harmony's "Work from Home." Overall, I don't think this playlist is a great representation of Nancy's character or the "slaylist" message at all.

Joyce's playlist is exactly as the title suggests - a halloween party. It is comprised solely of Halloween-ey songs, such as "Thriller," "Monster Mash," and the X-Files TV theme. I mean, it really has no purpose other than if you're a Halloween party DJ or want to get into the spooky spirit the week before Halloween.

Death metal is apparently what the Demagorgan listens to, so if that's what you're into then this playlist was made for you! Three hours of hardcore death metal for your easy listening.

Whoever made this playlist definitely didn't see Steve's character development in season two. This playlist is full of sappy chart toppers and one hit wonders without any cohesion. It goes from "Me, Myself, and I" by G-Eazy to "Tainted Love" a couple songs later and by the end we have "Sorry" by Justin Bieber and "Apologize" by One Republic. Although I don't like the playlist itself for the quality of music or composition of the playlist, the songs do tell the story of Steve. If you listen hard enough and think about the song titles you'll understand, which is pretty cool. However, Steve still deserves better than this playlist.

So quick! Go check out the playlists and special web player before they're gone! Listen to all the playlists while you're at it! https://www.spotify-strangerthings.com/