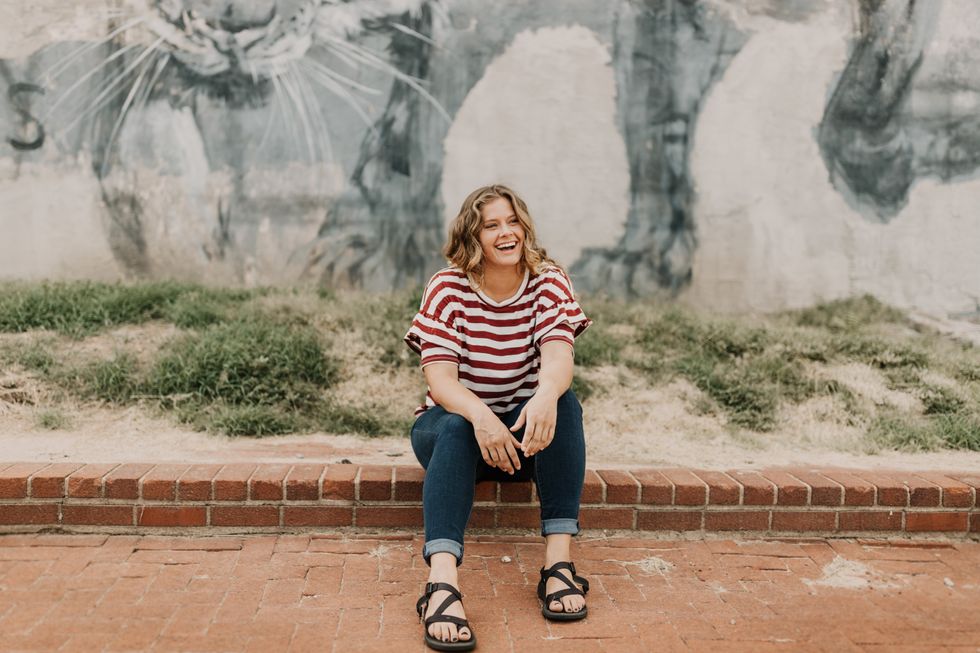 This summer, I ended one of the most extended relationships of my life. I was lost, dejected, terrified, apprehensive — I was feeling every emotion in the book — but I eventually found the courage to throw my last round of hormonal birth control in the trash where it belonged and not pick up my prescription for the next month.

I first want to communicate that I'm sure there are tons of women out there who have had nothing but success with hormonal birth control (or HBC), and I am genuinely happy for them. But there are also a lot of women who haven't been so lucky, and I'm one of them. When it comes to women's health I think we're oftentimes encouraged to push the bad stuff to the side, to sugarcoat the negative in favor of the "everything's fine, I'm fine" narrative. Speaking up about reproductive health, even now, is awkward or discouraged for some reason, and a controversial topic like the pill is no exception.

It so happens that September is National Polycystic Ovarian Syndrome Awareness month, a cause very near and dear to my heart. I was diagnosed with PCOS when I was 17 and immediately prescribed the pill to treat its more substantial effects, like obesity, irregular periods, insulin resistance, and the countless dime-sized cysts sitting on my ovaries. However, the pill does not cure PCOS, there is no cure, and HBC is commonly prescribed for the 1 in 10 women affected by this hormonal and metabolic disorder.

I was aware of the side effects, and though my parents and even my gynecologist expressed hesitation over someone still in her teens being put on artificial hormones, I was actually relieved to have a "solution" to my problem. Even at 17, I was extremely aware of how this diagnosis could affect my future, namely, in my chances of conceiving and having the family I've always wanted. It was all of these factors combined that led me to take the prescription with little to no concern for its side effects and potential consequences in the long-run.

SEE ALSO: 15 Things Women With PCOS Need Everyone In Their Life To Know And Understand

What followed after that initial diagnosis was a five-year-long nightmare.

I adjusted in a relatively common way, or so I thought, to the initial physical changes. My skin cleared up (a definite perk), and I did gain weight, but I was able to combat that easily with an improved diet and exercise (fun fact: women with PCOS build muscle more easily than women without, due to the increased levels of testosterone in our bodies).

I didn't begin to truly feel the full effects until a year or so after I began HBC, and the negative aspects became more exacerbated when I came to college.

The physical effects were mainly dominated by my appetite and by lack of sleep or poor sleep quality, and my energy levels severely diminished. I was hungry all the time, tired all the time, and I began to let stress control my every waking moment.

The physical side effects were bad enough, but the mental ones were somehow much worse. The terrifying part was my emotions, which felt like an arbitrary roll of the dice in waking up each morning. I could be deliriously happy (though those days were few and far between), or miserably sad or angry — there was no in-between. I frequently went from one to the next like a pendulum swinging, which became exhausting. I would scream at my mom, but the most frightening part was that I didn't know why. I would fight or cry or scream and have no real reason for doing so. That was the first few years.

When I came to college, I began to feel like I was under a microscope, with every anxiety and insecurity magnified by 1,000. I wanted to isolate myself. I would agree to go out with friends and immediately want to leave when we got there.

I felt like everything around me was constantly speeding up; everyone was moving at a faster pace, and I was the only one lagging behind even though I was running as fast as I could. It reminded me of running the mile in high school and inevitably being left behind on the track as everyone else surged forward. Everyone else was against me, or so I thought.

I strived for perfection because I knew it was unattainable, and then I would have a good enough reason to wallow in self-loathing, which I thought I deserved. As a second-semester junior year a handful of months ago, I became so stressed and so terrified, so angry at myself and everyone else, that I had what I now know is passive suicidal ideation, meaning that I didn't want to take my own life, but I wanted to die.

It was then that I'd had enough of this relationship, which had started off okay, but later became so toxic that I let it control me and possess my mind and body. It was last semester which was the game-changer because, despite everything I was feeling, I knew it was possible to live a better life than the one I was living. All I had to do was make a change.

In my five-year journey with PCOS, of all the medical practices and hospitals I've been to and all the doctors I've seen, none of them mentioned the widely researched connection between HBC and depression, or the fertility awareness method. It was actually my sister, a registered nurse and mom of two, who first told me about it and for all intents and purposes, basically saved my life

Fertility Awareness Method, also known as FAM, is a completely safe and holistic (i.e., no drugs needed) approach to conceiving, but it also has major advantages for women who aren't trying to conceive, especially women with PCOS.

Using three simple indicators (a calendar, monitoring cervical fluid and taking basal body temperature each day), women are able to see when they've ovulated and get to know their bodies. There are tons of misconceptions and misguided ideas about what FAM actually is, but it definitely helps to do plenty of research (and to find healthcare professionals who are committed to what you want, regardless if that involves big pharma or not).

In doing that research, I found a community united across the globe and across social media platforms, a collective of compassionate, non-judgmental, understanding women who want nothing more than to educate and lift one another up. Discovering that there were natural ways to treat what has been the most complicated and discouraging diagnosis of my life has been incredible. I am committed to my diet and exercise regimen and taking back control of my body, and my mind has been the most empowering decision of my entire life. More than that, I am happy.

I broke up with HBC four months ago, and I haven't looked back since. It was less painful than I imagined, and though I'm unsure of what the future holds for me and PCOS, feeling this fantastic every day lets me know it's more than worth it.