Why the focus and media approach on these tragedies seems misguided 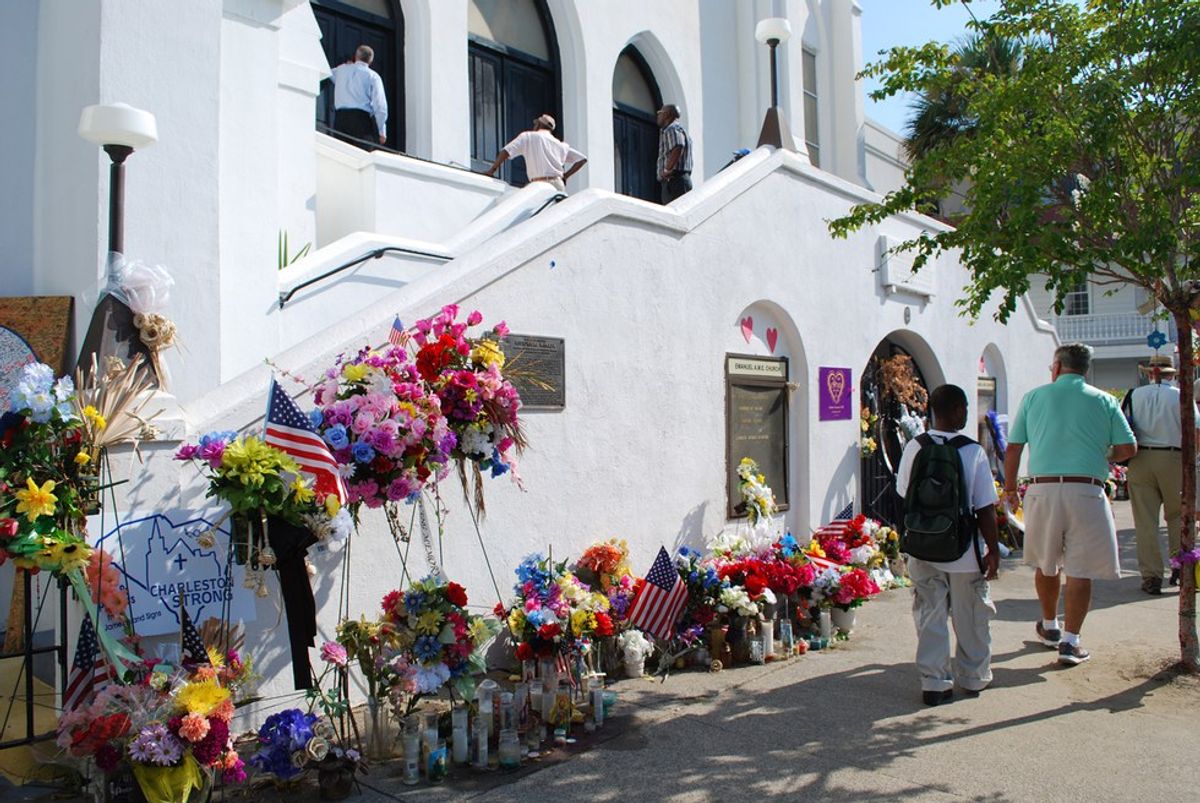 Considering the ongoing trial of Dylann Roof, the malicious and cowardly murderer of nine African Americans at Mother Emanuel AME church in Charleston, I have been bombarded with images of Roof’s pocked complexion and vile expression. News outlets have taken it upon themselves to fill me in on the intimate details of Roof’s upbringing, relationships, reputation at school and internet search history. Photosets of his awkward and racially charged selfies make me feel like I’m looking at a KKK themed scrapbook.

Dylann Roof murdered nine African American churchgoers because he is a racist and a thug, NOT because he is mentally ill or wasn’t loved enough as a child.

Trustee of the church and member of the choir. She, her nephew Tywanza Sanders and cousin Ethel Lee Lance all died in the shooting.

Mother of five, Lance worked as a custodian at Gaillard Municipal Auditorium in Charleston from 1968 to 2002.

Reverend and senate representative of the 45th district in South Carolina, spoke against racism at the South Carolina Senate weeks before his murder.

Graduate of Allen University with a business degree, Sanders dreamed of owning a barbershop. He was murdered while trying to protect the other members of the church.

A fourth generation preacher, Simmons is survived by his two children and four grandchildren.

A high school speech therapist and coach for women’s track and field, she is survived by her two sons and daughter.

A retired teacher in the Charleston County School District, Thompson was leading the bible study on the night of the shooting.

While every major media source has provided more information on this sadistic killer than the universe ever needed, I have yet to see any do a feature on the victims of Roof’s rampage.

The United States has more mass shootings than any other country in the world. According to massshootingtracker.org, 565 people have died in 2016 alone as a consequence of mass shootings. When yet another mass shooting happens, news media, politicians, and other so-called experts gather in a circle and muse of what could possibly be the problem! When analyzing the problem, most choose not to focus on the real and obvious nationwide factors contributing to this hike in violence and instead choose to focus on picking apart and inspecting the psyche of the individual who commits the heinous act. They plaster his face on every news outlet they can and interview his family, his friends, his guidance counselor, and his dog.

CNN’s most recent article covering the trial titled, “Mass shooter Dylann Roof, with a laugh confesses, ‘I did it’” doesn’t even mention a single victim’s name till the 40th graph. NBC’s most recent article, “Dylann Roof’s Videotaped Confession Stuns Courtroom” finds it important to note that Roof’s poor mother suffered a heart attack after hearing what her son had done. Yet, interestingly, the article felt it unnecessary to mention the names of any of the nine victims or their mothers once. Not once.

I’m tired of having to google “Names of [insert dirtbag’s name here] victims” just to find out more about the human beings who had to suffer at the hands of some self-important individual with raging anger management issues and something to prove.

I hate that news stories have forced me to know his name, his history, his grades in school, yet I’m wondering without any answers as to what Tywanza Sanders, 26 saw for himself in the future before some bug-eyed 17-year-old jagweed decided to take away his chance to experience it.

News outlets have become less and less empathetic toward victims of tragedy and more like misery leeches, using moments of despair as conduits for their own personal gain. People eat every morbid detail up, for the same reason that people love to coast past car-wrecks at 15mph while craning their necks as far as they can.

I’m sure it comes as no surprise that the despicable humans who go out murdering people en masse do it because they want to become famous but they have absolutely nothing remarkable or exceptional about them. It’s far simpler and easier to buy a gun and kill civilians than it is to make it through auditions on "America’s Got Talent."

News outlets give them exactly what they want, they blast their hateful messages at all hours of the day, post their prom photos instead of their mugshots, endlessly drone on and on about how “nobody saw it coming.” If I hear one more news-anchor refer to a mass murderer as “quiet” or “misunderstood” I’m going to become a Luddite.

Does it really surprise anyone that mass shootings become more frequent just after the media publicizes one? These exposés into the mind of a murderer are only breeding more murderers.

If news outlets want to play their part in reporting news ethically, they need to choose not to broadcast an in depth look at the lives of these sadistic troglodytes. Instead, news reporters should focus on the victims, let their patrons know just who was lost. Stop reducing them to faceless numbers, make people empathize with their family’s pain.

Glorie Martinez
5231
Why I Write On Odyssey