News anchor stuns journalism students with her experiences
Odyssey
CurrentlySwoonLifestyleHealth & WellnessStudent LifeContent InspirationEntertainmentPolitics and ActivismSportsAdulting
About usAdvertiseTermsPrivacyDMCAContact us
® 2023 ODYSSEY
Welcome back
Sign in to comment to your favorite stories, participate in your community and interact with your friends
or
LOG IN WITH FACEBOOK
No account? Create one
Start writing a post
Student Life 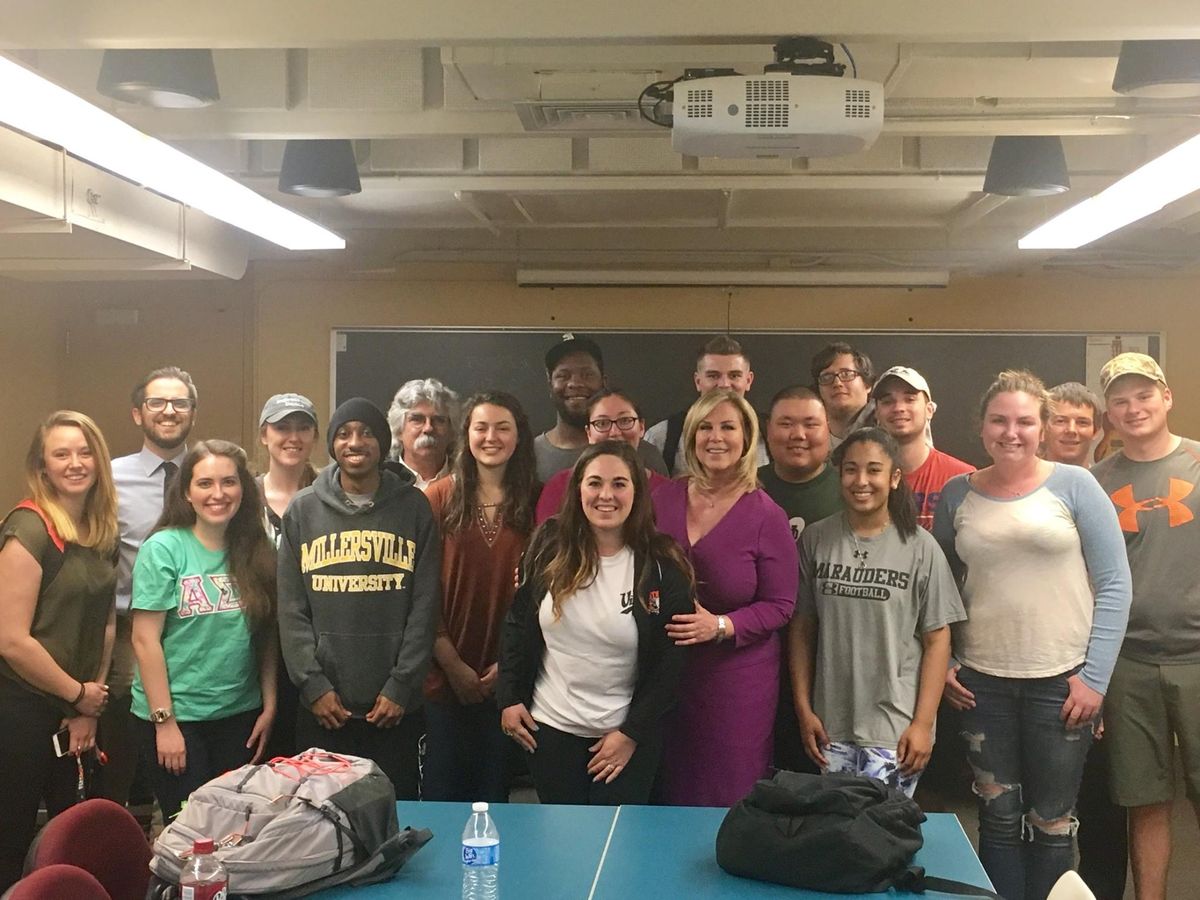 Professional, playful, political are words that describe Janelle Stelson to a tee.

Stelson is known around the Lancaster area as the news anchor for WGAL Channel 8, an NBC affiliate of Central Pennsylvania. She co-anchors News 8 newscasts at 5:30, 10:00, and 11:00 each weeknight.

Stelson came to Millersville University on April 19. She was invited to speak to English and journalism professor Alan Foster's Advanced Reporting class.

Her visit to Millersville solidifies her commitment to the community she reports stories to.

She initially was not a journalism major.

She graduated for the University of Pugent Sound in in Tacoma, Washington. While at the “Harvard of the West,” she majored in government and political affairs.

Born in Fairbanks Alaska, where she was the oldest of four girls. Her father was an Alaskan State trooper.

She grew up in a political family.

Her grandparents were former White House workers and diplomats. Her grandfather was the first ambassador to Austria after World War II. Her grandmother was a secretary in the White House. the person who had to hold President Franklin D. Roosevelt whenever he gave a press conference.

“We have a fun history in politics,” Stelson said.

Stelson stated that her early twenty was the most uncertain time of her life. She advises the students to make intelligent decisions very step of the way. She wishes that she had someone tell her to not freak out when she was in college.

“You’ll be surprised with how what you will learn along the path will eventually make the universe shake out the way for you,” Stelson said. “It will lead you to the evolution to wat you’ll become.

Her evolution of political knowledge helped her land a job after college. She first wrote speeches for the economic minister of the Egyptian Embassy. Then she worked in the press bureau.

She recalled a story about miscommunication with the minister of information, which she described as a 300-pound man. Where, an Islamic slur came out of her mouth in a conversation with a butler.

As she knocked on a wooden computer desk, she stated that it was the only time she got fired from a job.

She advised the students to not be freaked out if things don’t go their way. She worked in the embassy of Egypt, which given her a higher salary, and prestige.

“If you work really hard, giving it your all and try to do a great job, chances are it will lead something else really great,” Stelson said.

Her political knowledge is an example of a passion she has. She noted to the students that whatever their passions may be, it always brings something to the table. When she was in college, she didn’t know that the politics and government passions would help her land a job in journalism.

“Look at the world these days,” Stelson noted. “It’s an important thing to know about why the Sunnis and the Shiites are and why everyone is banging away at each other.”

Her transition from civic service to journalism had Western multiculturalist influence. She went to a bar with higher-ups of the embassy. She was sitting nearby when she overheard anti-Semitist comments made from one of the Islamic Egyptians. She believes that employees should be aligned with the ideology of her coworkers and follow organization beliefs. That moment made her realize that she wanted to something else with her life.

Like many Americans now-a-days, Stelson made a career change. She decided to enter journalism without any knowledge of the inner workings of the media.

She did not know that as a news reporter, you had to submit a tape of news reporting. Nor did she know about media markets. She believes that the close proximity to the Philadelphia market for Lancaster is why Channel 8 is a good “feeder station.”

“If you’re bad as I was and didn’t study broadcasting, you want to get good fast,” Stelson advised.

After submitting letters and headshots, she was given two job offers from ABC27 in Harrisburg and Portland, Maine. She chose Harrisburg over Portland because of market size and close proximity to her boyfriend at the time who was attending the Wharton School of Business in Philadelphia.

“The larger the market you start in, the better,” Stelson said. “Because, you are surrounded by more talent who are experienced. You get sucked up to their level faster.”

She then moved onto to the ABC affiliate in Miami, Florida, after her contract expired.

She then moved back to Harrisburg, where she works for WGAL Channel 8 today.

She did admit that she does not envy present day college students entering broadcast journalism. She feels that she entered the field during the “golden age.” She sees the industry being “fractured” and she is unsure how it is going to look in the future. With how information is now at everyone’s fingertips, people who aren’t trained as journalists can provide media coverage of any news story.

“The more people you have leading the free world who want to cut the right to access, the more you need journalists,” Stelson said.

Stelson sees this time being a tough time to enter the business. She told the students that they will be riding the next information wave.

“It’s been a really fun career so far,” Stelson said.