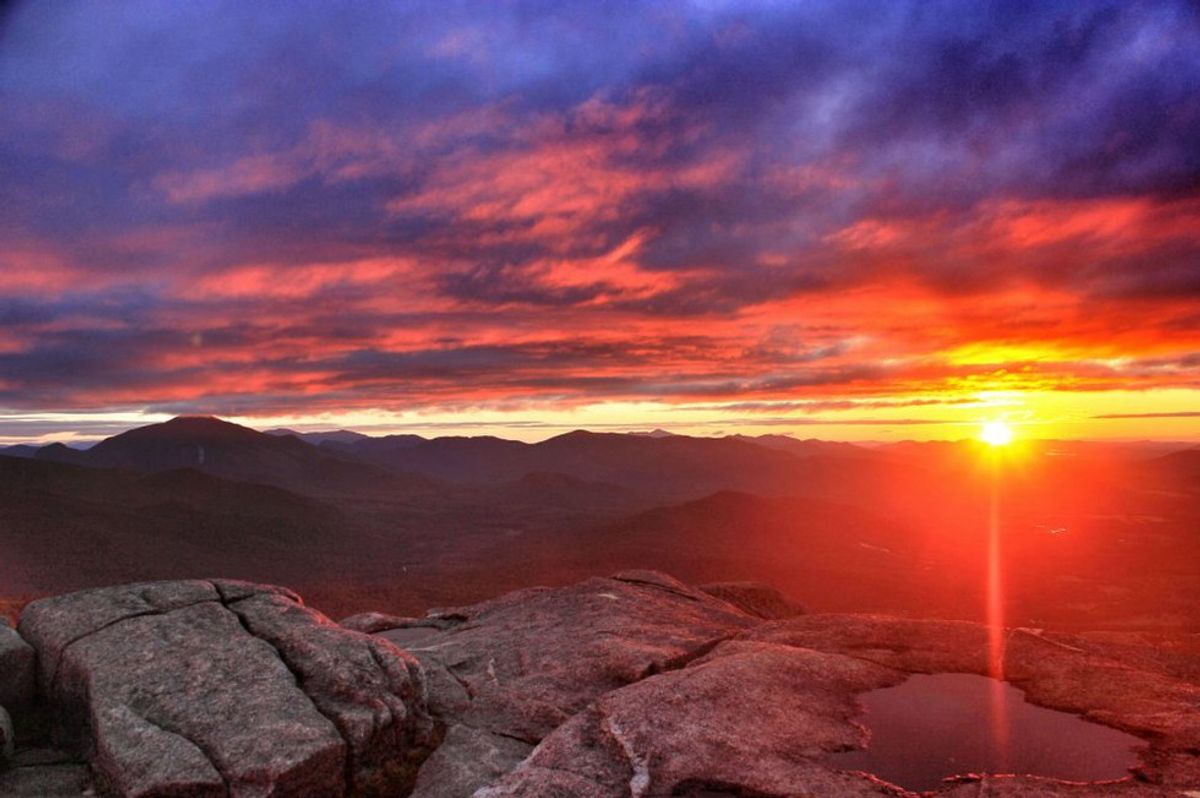 Columbus Day weekend was coming to a close. My uncle and I had already climbed five mountains and hiked over thirty miles since Saturday evening, and we were determined to nab two more mountains before we called it a weekend. We had packed into Elk Pass on Saturday night, covered a bunch of ground in the surrounding area, and packed out that Monday morning. Yet, there was still a little daylight and we weren’t dead yet, so my uncle proposed that we nab Cascade Mountain and Porter Mountain before we left the Adirondacks behind. He had hiked them before, and said that the hike wouldn’t destroy us.

So we arrived at the Cascade lot, a small divot in the highway. We had re-fueled our bodies at a Stewart’s on the way from our last parking spot to the Cascade divot. So, with boosted sodium levels and a little bit of ibuprofen, we started up Cascade Mountain.

As far as we could tell, we were the only hikers going up. Almost everyone else on the trail was there for just that day, and was not sure what to make of people hiking up the face in the waning sunlight.

One Quebecois man in particular, was quite confused by two men wearing t-shirts hiking up a high peak in Autumn as night fell. His wife assured him that my uncle and I did, in fact, know what we were doing. At the very least, we had fleeces and headlamps.

We ran into the last bunch coming down for the night; a young family with a kid and a sweater-wearing pug. They said we were almost at the trail junction between the two mountains.

Rough, snaggly trails were giving way to bare slag. Both of us were tired, but I love a good rock hop, so I picked up the pace. My uncle told me to go ahead; he would see me at the top.

I was in the Alpine Ecosystem, head and shoulders above the treeline. The surrounding valley was brimmed by a glowing orange horizon. The last curve of the sun was disappearing to my left, illuminating the autumnal trees in each col, slope, ridge, and valley.

The peak was straight ahead of me. I fixed my eyes on the bronze marker embedded in the stone: soon, very soon.

By the time I turned back to my left, the sun had sunk behind the mountains.

Though the sun was no longer visible, the valley remained alive: dying leaves in the dying light.

My uncle and I stood together on the summit, tightly wrapped in our fleeces; I understand why he wanted to summit on Cascade while there was still light. Looking to the East, I could see the banks of Lake Champlain, both near and far. Vermont’s mountains looked across to our side, we as hazy to them as they were to us.

Looking below us, patches of differently shaded leaves from wild groves of trees pooled together into a bright, yet earthy collective, bound to others of their species, yet flowing together with unfamiliar clades. The lowlands bloomed with warm colors while cool evergreens clung to the summits, knowing their hour of glory is still to come.

Few die so beautifully as the fall leaves.

With a new sense of vigor, my uncle and I set out to climb Porter.

The orange glow fills the gaps between the thick, black firs.

I should have put on my headlamp sooner.

With a yell, I fell on my side. Pretty as the auburn twilight was, I wished I had seen the notch in that rock. I put on my headlamp and keep going.

My uncle and I rested in the hollow of Porter’s skull; the bones of the mountain poke through the moss and loam.

The horizon was not orange. Rather, it was the full spectrum of light. Red creeping near the ground, orange hovering above, yellow starting the sky, green sitting at eye level, blue feigning day, indigo hinting towards gloom, violet fading to blackness.

Distant stars brightened in the darkness above as my uncle and I munched our trail mix. From our hollow, we could see Marcy, her neighbors, and the distant lights of Lake Placid. Blinking reds indicated structures built for the 1980 Winter Games. Though we could see the far clearly, the valley just below us was murky.

Eventually separate constellations were visible to us mammals, who believe we can name these groupings: Draco, Andromeda, Cetus. A satellite streaked through our cosmic connect-the dots.

The car sat loaded and ready, about to pull out of the divot in the highway.

As it turned out, I had been bleeding since I fell on the rock. The scrape was smaller than the blood suggested; knuckles like to be melodramatic.

Our packs down, our sweaty clothes swapped for something cleaner, my uncle and I removed our boots and slipped into street shoes, reclaiming our comfort.

With that, we left God’s country and returned to the land we call our own.