New Boston Restaurant Has Robots As Chefs
Odyssey
Odyssey
CurrentlySwoonLifestyleHealth & WellnessStudent LifeStuffEntertainmentPolitics and ActivismSportsAdulting
ShopOdyssey UniversityAbout usAdvertiseTermsPrivacyDMCAContact us
® 2019 ODYSSEY
Welcome back
Sign in to comment to your favorite stories, participate in your community and interact with your friends
or
LOG IN WITH FACEBOOK
No account? Create one

I Had A Meal Made By Robots, And I Have To Say, It Was Pretty Darn Good

No, seriously, my meal was freaking delicious.

The future lies in robots. They've been crucially useful in advancing research, been apart of new scientific discoveries, and have inspired countless movies endearing to adults and children alike. It's no secret we've let them into our lives, building them to accomplish tasks as simple as vacuuming our floors. Some of them even dispense our toothpaste for us.

Now, they've taken a step further into our personal lives to help us out with something that's still considered a very human activity: cooking. Just past Boston's Downtown Crossing is a small but unassuming restaurant called Spyce, which recently opened in May. Inside, you can order one of seven bowls, each of them inspired by different regions of the world and can be easily updated to be vegetarian, pescetarian, gluten-free and vegan.

What's the twist, you ask? Well. Your food's prepared by robots.

During my visit to the restaurant, I was surprised by how minimalist the entire setup seemed. For one, the atmosphere was much quieter than I'd expected -- normally in a kitchen, there's shouting, sizzling pans, and utensils clanging on the regular. There was none of that here, only food gently cooking itself to perfection in a rotating cylinder.

When you're ordering your food, you're asked to put in your name so that you're able to identify which pot your meal is being cooked in, and so you can follow the course of your bowl being created. Behind each pot, a little cup will throw in rice, chicken if you ordered it, and any specific cookable foods that can go into the pot. The little red box (shown on the far right of the picture) will zoom back and forth and eventually squirt a generous helping of sauce into the pot.

After, it tilts forward and rotates for a couple of minutes while the rice and chicken cook. It's almost kind of mesmerizing to watch as it goes around and around. There are exactly two workers at the bar, and their job is to do two things: one, make sure that there's a bowl for the robot to dump its food in, and two, to add any extra toppings that are part of the bowl.

Once the food is deemed finished by the robot, the cylinder will tip forward, empty its contents into the little paper bowl, and get whisked to an extras station where more components get added. Add a little sticker with your name and the bowl you ordered, and you're good to go. Overall, the whole process takes about ten minutes -- it's fast food, in a way, but it's not quite as fast as, say, McDonald's. Think a little longer than Five Guys, sort of.

During my visit, I had the Indian bowl, which Spyce's website describes as containing "roasted chicken, potatoes and peas in a tikka masala sauce, brown rice, cilantro, puffed rice, tamarind chutney, and yogurt". The chef behind the bowl, Sam Benson, explains his thought process:

"I have always had a short attention span, so I wanted to create a lively Indian bowl that still remained true to many of the country's cultural traditions," he says. "The flavors in this bowl are intense and purposeful. By making peas a central element of this dish, their texture is able to pop underneath the tamarind and date chutney. The final touch, the puffed rice, adds an unexpected crispiness to make this bowl inviting and intriguing."

(Among the recommended add-ons were boiled eggs, pomegranate seeds, and the restaurant's avocado lime crema. I went with none of those and added cucumber salad instead.) 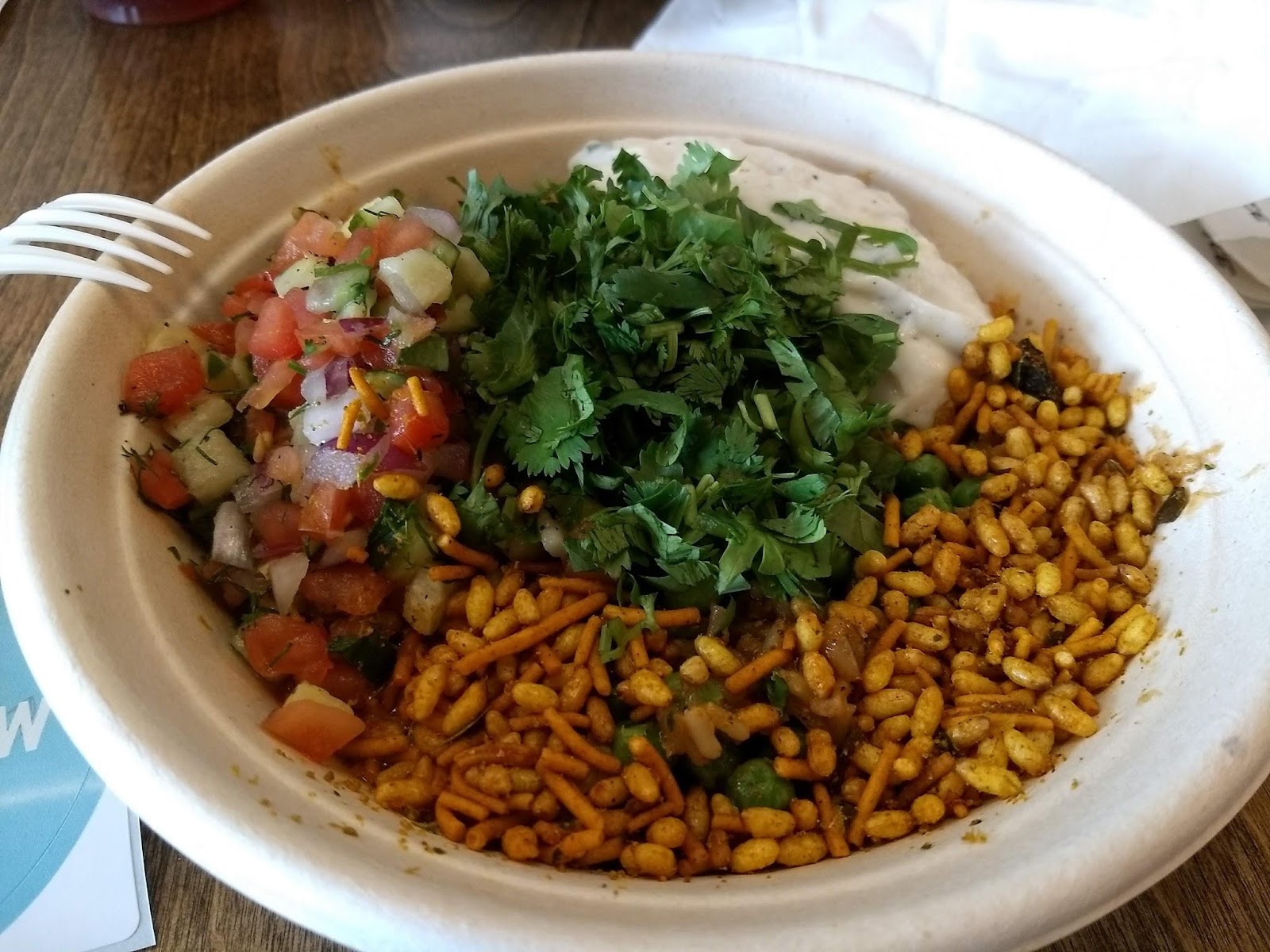 The thing about having your bowl made by a robot is that there is a chef that has perfectly determined the ratio of spice to ingredient to sauce needed to achieve maximum taste; a human might err on those perfect proportions from time to time but a robot is able to accurately measure each quantity over and over.

So, naturally, my bowl was freaking delicious. Everything tasted unbelievably fresh, and each component of the dish stood out equally. Benson was right about the sudden crunchiness from the puffy rice; it made the whole thing different from any other time I'd gone to eat Indian food. I'm even proud to report the chicken wasn't even dry -- dry chicken is one of my pet peeves.

I washed down (or tried to, anyway) the bowl with a tart limeade, which was more of a chore than it seems -- if you like sour things, go for it, but if you don't, stick to the iced tea instead. The ordering kiosk offered a choice for dessert, but it doesn't quite seem like they're there yet, so I ended up dumping some sugar into my drink and hoping for the best (no such luck).

Amazingly enough, the bowl only cost $7.50. Each of the bowls costs the same -- and they all pack a pretty heavy punch in terms of the amount of food you get. So if you're looking for a novelty but cheap eat, go to Spyce and watch your food get cooked by a robot. At the very least, you won't be bored waiting for your food.