Why I Am The Human Form Of "Spirited Away's" No Face

He starts out as a very shy background character, and only starts becoming a major character once he is invited into the bath house by Chihiro. 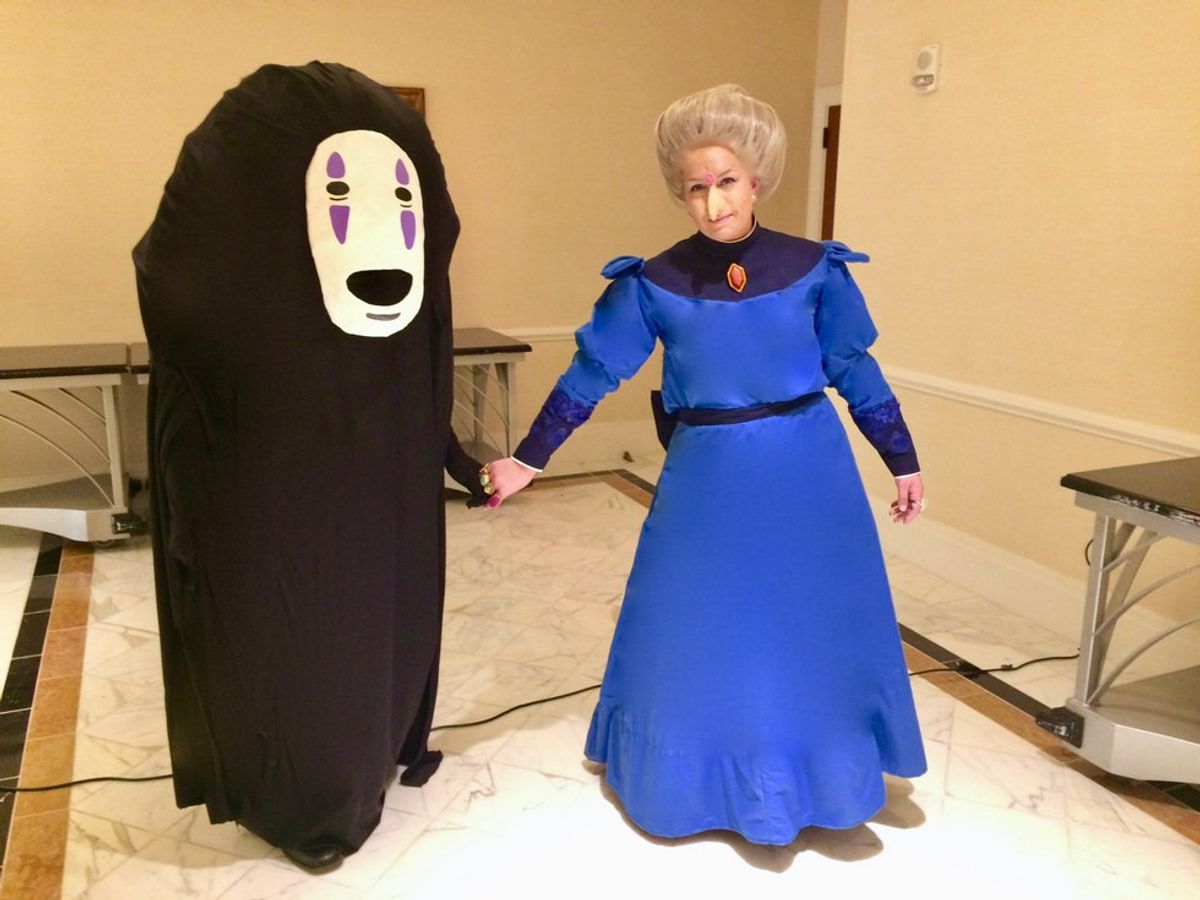 I love Studio Ghibli. They have produced some of my favorite movies such as "Princess Mononoke," "Howl's Moving Castle," and my all-time favorite movie, "Spirited Away." In fact, my friend and I both love this movie so much, that we decided to make a cosplay of each of our favorite characters.

The amorphous, slightly unsettling figure on the left is me. For those who may not know, the name of that character is No Face. He is a spirit from the movie "Spirited Away." Besides the mask and ability to hide from people, I was drawn to doing a cosplay of No Face. When I was trying to figure out why he had such a draw for me, it was because I really was able to empathize with the character. And from talking to people about the movie, there are a lot of people who are able to, on some level, connect with the character.

I think the reason why I and many others are so drawn to the character of No Face is because he is such a relatable character for many experiences that we had growing up. In the movie, he starts out as a very shy background character, and only starts becoming a major character once he is invited into the bath house by Chihiro. The one thing that he wants more than anything is to be accepted by friends. And he tries various methods to make friends, first by giving Chihiro some bath tokens to fill the tub, and then, after observing the excitement and draw of the bathhouse staff to the gold left by the River Spirit, by conjuring gold (which later turns out to be fake) to give to everyone. However, he very quickly realizes that the first "friend" that he makes is only his friend because of the gold, and eats him for it. He reasons, though, that despite the fact that people will only be friends with him for superficial reasons and don't really care about him, that he can still have people he calls friends. He is willing to make that exchange. This backfires on him, though, as his "friends" begin to desert him once it is no longer in their best interests to stay his friend. (Read: he is not giving them any more gold.) Chihiro, the one person who has so far actually cared about him for who he is, teaches him a very literal life lesson when she feeds him a powerful emetic medicine given to her by the River Spirit. When she gives him this medicine he begins to retch, and to expel black sludge (and eventually the people he has eaten) and reverts from a very angry, unpredictable figure to his more gentle, timid self. She takes him with her to meet a powerful witch, where he discovers that he is incredibly adept at spinning thread. When Chihiro decides to go back to the bath house to find her parents, No Face elects to stay behind with his new friend and to spin wool, which he both enjoys and is, as has been mentioned before, incredibly adept at.

The reason why, for me, he is so relatable is because of my own life story. Growing up I was a lonely kid. I was always...different from other kids. I wouldn't ever feel bad for things that I did or for things that happened to them. I had a difficult time making friends. I had a few people in my life who were always there for me, who always saw the positives in my life, but I never saw them for who they truly were. They were just friends. In middle and high school I had a lot of people that I called friends, but they weren't, they were there because I could give them something, and the moment I couldn't give it to them anymore they left. And it took me until my sophomore year in college to get my emetic medicine journey. A good friend of mine, he is actually a friend, sat me down and gave me what I like to call the "LF" talk. (You can probably work out what it means.) He told me what I needed to hear, and how much of a jerk I was being, amongst other things.

Now, my story goes in a very slightly different order than No Face. I actually discovered what I was good at in my senior year of high school. It was music, specifically, playing the cello. And I was good at it. And, as it happens, good enough that I went to college for it. But upon further reflection, it wasn't until I had my emetic medicine that I began to truly get much better than I was when I got to school.

This storyline is a similar one that many people go through in their lifetimes. For some people, their whole journey is done by the time they finish 5th grade. For some, it's not over until they are on their deathbed, and they are able to receive their emetic medicine.

But the story of this character touched me so deeply that I decided to cosplay as the character and to create both Bath Tokens and gold pieces to hand out while in costume. While in this costume I learned something, though. While in costume, many people came up to me with exclamations of delight, asking "can I take a picture with you?" I was more than happy to, of course, but one thing that often followed is something that I will remember for a long time: "This is my favorite characters from one of my favorite movies of all time because I can relate to him." So many people would say that, and I began to think that perhaps I wasn't the only one with whom the character of No Face resounded.

One of the reasons that so many people love the movie "Spirited Away" is because of how easy it is to relate to at least one of the characters in the movie, in addition to the art in the movie being beautiful and the story being very easy to understand for everyone. Sure, there are some parts that terrified me when I was younger, like when Chihiro's parents are revealed to have been turned into pigs, and when her mouth is literally zippered shut by the main antagonist of the story. But this is one of Hayao Miyazaki's best films and is one that I highly recommend to everyone.

Caitlin Marie Grimes
University of South Florida
6984
Beyond The States