How SoulCycle is About More Than Just Exercise
Odyssey

How SoulCycle is About More Than Just Exercise

SoulCycle makes your body sore, and your soul strengthened. 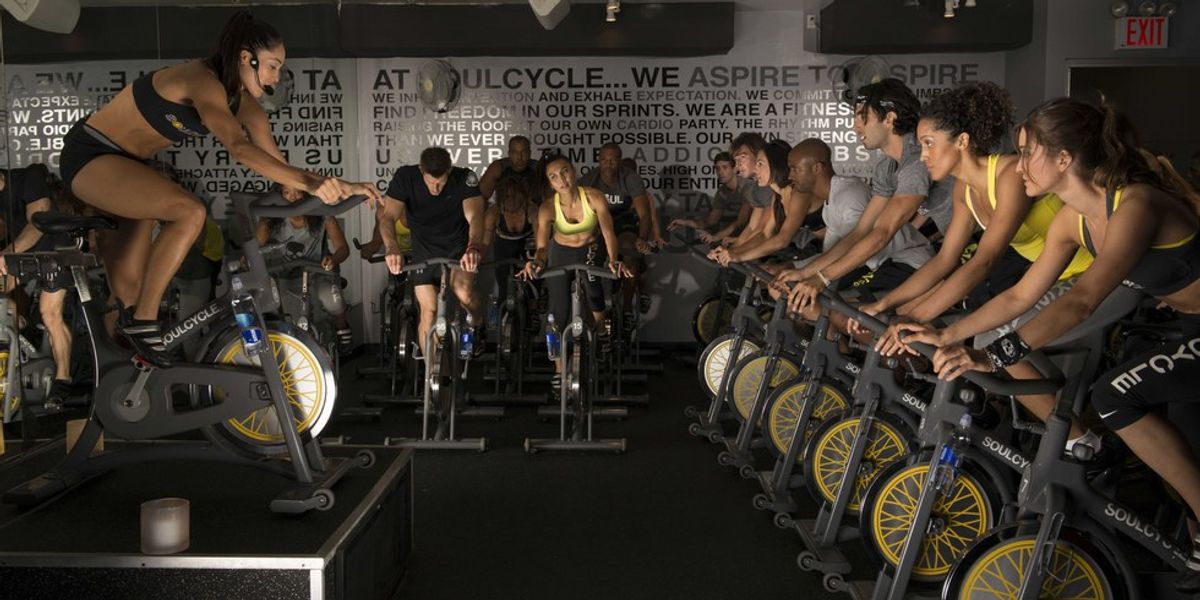 My first SoulCycle experience left me sweaty, inspired and tired. I had planned on going with my aunt since I first heard the boutique fitness franchise was coming to my area, and I anticipated a glamorous workout where participants glittered rather than sweat. How could such a trendy workout make you look like a sopping wet mop? Somehow, I thought, this innovative spin class would defy the norm -- it would burn hundreds of calories, but leave people looking fresh-faced after their "Soul Journey." After a few months of anticipation, I finally made my way into the saddle for an excruciating journey that tested my soul, strengthened my body and boosted my self-esteem.

I consider myself to be a somewhat fit person. I run every day. I have felt myself get stronger from my hard work, and I know how great it feels to complete a strenuous workout -- at least I thought I did.

My aunt and I arrived at the studio about forty-five minutes early... We were excited (and nervous); we like to stay on-trend. We heaved the big glass door open, smiled at the adorable yellow spin-bike adorning the entry way, and entered the lobby of the studio. It was pristine to say the least -- it was reminiscent of a high end spa. The locker room aesthetic further emphasized the spa-esque vibe of the workout studio. Crisp white trimmed with gray and yellow comprised the entire building. In the shower, there were SoulCycle brand soaps and on the sink, there were complimentary hair-ties and gum.

After exploring a little bit, of course our eyes traveled to the ceiling high array of SoulCycle apparel taunting us with its fashion-forward activewear line. We submitted to the temptation and both ended up buying tank tops.

We were starting to get nervous as the class time approached. I had never taken a spin class before, and the previous day, my sister had warned me that SoulCycle would "kick my ass."

We entered the studio space with ten minutes to spare, had instructors adjust our bikes for us and got into the 'saddle' (don't you just love spinning lingo?).

The class was pretty packed. Suddenly, an extremely fit woman entered the room with a microphone headset fixed to her head. That was the instructor, Sabine. She was exactly what I expected a SoulCycle instructor to look like -- glamorous. She stopped in the middle of the studio and looked up. "Are those fans on?" She asked. "Those need to go off."

And they did. And I gulped.

The lights switched off, leaving only candlelight and the glow of the instructor's computer to illuminate the space. (Did I mention the studio is a phone-free zone? So there aren't even cell phone screens distracting riders.)

The music started, the instructor started speaking, guiding us on the Soul Journey and telling us to savor the 0 resistance setting on our bikes -- because it was the first and last time in the next 45 minutes that we would experience such a leisurely ride. The beat of the music dropped, the pace quickened and the class began to ride in a beautiful, synchronized motion.

The class was like a dance party, and the instructor was the DJ, spinning her tracks from her Macbook while spinning furiously on her bike in front of the class. Her motion wasn't dizzying, it was clarifying, as she preached to the class in a melodic voice that made you want to bike faster, that made you want to praise your body and take care of it.

About halfway through -- or what I assumed was about halfway, since I was lost in the funnel of SoulCycle -- I thought to myself, what the hell am I doing. Every one in class beside my aunt and I must've been regulars. Their arms were sculpted and their motions were perfectly in-sync with the music. Meanwhile, I was bobbing up and down, slightly off-beat and soaked.

But that's not what SoulCycle is about. It's not about comparing yourself to the people around you. It's about focusing on being yourself, letting your soul transcend your body. It was truly an inexplicable experience that did indeed kick my ass. But it was also motivational. I left the studio feeling mentally and physically strengthened. I was proud of my body and grateful for its endless capabilities. In an age where eating disorders are prominent, sickly-skinny is 'beautiful,' and hating your body is 'cool,' it is enlightening to have a fitness trend that focuses on body appreciation rather than focusing on which parts of your body you need to "work on." I'm not always self-confident, but sweat and all, I felt beautiful and strong as the steady bass of Sabine's playlist faded to silence and the entire class cheered. People cheered! As they were panting, smelly and coated in perspiration, they cheered -- for themselves and Sabine... and for the experience.

Even though we left the hot yoga meets dance meets spinning class tired and hungry -- "hired," if you will -- my aunt and I were already planning our next trip to SoulCycle on our car ride home as we bonded over how that was the hardest workout class either of us had ever taken. We were physically wiped out, but we were mentally energized, ready to take on the world with a newfound appreciation for our personal strengths.