Learning Arabic - language is a powerful tool
Odyssey
Odyssey
CurrentlySwoonLifestyleHealth & WellnessStudent LifeStuffEntertainmentPolitics and ActivismSportsAdulting
ShopOdyssey UniversityAbout usAdvertiseTermsPrivacyDMCAContact us
® 2019 ODYSSEY
Welcome back
Sign in to comment to your favorite stories, participate in your community and interact with your friends
or
LOG IN WITH FACEBOOK
No account? Create one

Language is a powerful tool.

We are now in the Arab Bazaar! There are colors and sights to see all around--which seems to be a theme in this diverse, bustling city. There are some Arab women selling fresh vegetables in the streets, while others--both men and women now--are in their shops, beckoning us in to check out their beautifully painted pottery, handwoven quilts, and heartfelt stories.

I go into a few places, admiring the scenery around me. I get asked a lot whether I'm Chinese or American, and I reply that I'm both--just like Arabs can be Arab-Israelis, I can be Chinese-American. Of course, I know that the status of a Chinese person in America is not the same as an Arab living in Israel.

I later learn that Israelis want to create a country where only Jews get the top-tier citizenship. It's a hard concept to struggle with at first, and I will discuss the idea deeper in a later chapter, but I knew that as an American, the idea of anything besides pure, true equality would sound ludicrous to me. 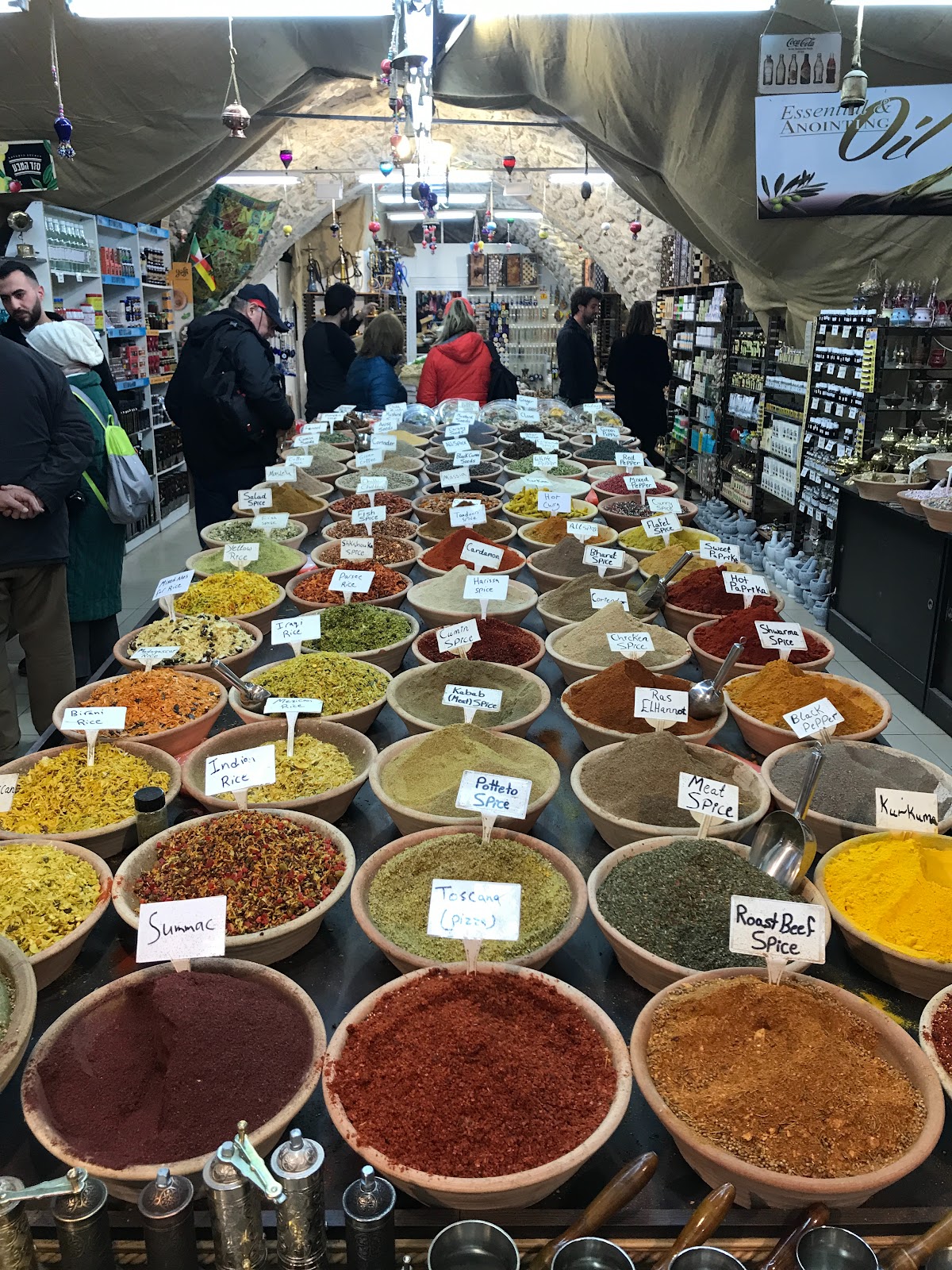 Back to the bazaar. After introducing myself to some shop owners, I mention that I took Arabic this past semester. And though I know I only speak MSA, I try to communicate with the small portion of the language that I know. I can use Arabic to talk about where I'm from, what school I go to, what I'm studying, and why I've traveled to this region.

I ask them the same. I learn that one shop owner, Abbad, is from a Druze village; another one, Muhsin, is Palestinian, and he has family living in the West Bank. I ask about why they've chosen to come live in the Old City, and Abbad says that, as a secular Druze, he chose to move away from his village.

Muhsin says that he makes better money in Jerusalem; he commutes from the West Bank to the Old City everyday for work, and uses the money to provide for his family. It's at this point that I realize there are so many Palestinians who come into an Israeli-dominated economy to make better money for their families--and I will touch on this more when I talk about going into Ramallah for the day.

Beyond surface level introductions, I start asking them about their craft and language. I learn that they, like many other Arabs, learned MSA in school but prefer their local dialect as it is easier for them to use.

I also learn that they make their own jewelry, quilts, and pottery. By the end of the day, I had bought a pair of earrings. They were in the shape of olive trees--the symbol of peace and reconciliation--and had the Arabic word for Palestine ("فلسطين" or "Filustiine") engraved under it.

Speaking of the Arabic word for Palestine, I read a very interesting--albeit enraging--article last summer. Apparently, back in 2016, a conservative lawmaker in the Israeli Parliament said that there should be no state of Palestine because the Arabic language (in MSA) does not include the letter "P."

Indeed, there may not be a hard "p" sound in Modern Standard Arabic (which is why in the word for "Palestine," Arabic uses the "f" sound for "Filustiine" instead), but that should not be the defining factor of who gets to exist and who doesn't. Who would ever think to justify human inequality with a note in grammar?!

And, if she actually believed in her argument, then Jews would be in trouble because there is no "J" in the Hebrew alphabet. On a similar note, Americans couldn't have pizza because the "tza" sound doesn't exist as a letter in English! And who are we to use the English version of a word ("Jew" or "Palestine" as it is the "y" sound in Hebrew and the "f" sound in Arabic for those respective words) to define the existence of a culture that isn't Western, American culture?

Luckily, none of the Israelis I have ever met have echoed the sentiment of this Parliament member, and none of them are as closed minded as she was--obviously, she was stuck in a time where people were at each other's throats.

Today, actually, there are new, informal letters being introduced to the Arabic alphabet (such as the hard "p" sound) to accomodate for loan words from other languages that use sounds Arabic doesn't traditionally use; this is similar to how English adopts non-traditionally-English ways of pronouncing words that come from foreign languages.

Before we get too sidetracked and before we leave the bazaar, I want to talk about the name of the market--and if you were keen, you would have noticed that in this sentence, I used two different words for the same thing: bazaar and market.

Well, those are not the only words used for this either. Israelis call it "shuk" and Arabs call it "souq" or "souk." Spanish people call it "zoco," Armenians call it "shuka," and other spellings for this same thing (a commercial quarter, marketplace, what have you) include shooq, soq, esouk, succ, suk, sooq, suq, and soek--depending on if you're from West Asia, Northern Africa, or the Horn of Africa. "Bazaar" is actually Persian.

Just some food for thought, because people who come from all the above mentioned walks of life live in Jerusalem, and they all have different terms for the same place they buy their groceries and quilts from.

After our time at the market/bazaar/souq/shuk/quilt-selling place where I had some great conversations in Arabic, we walked back to our hotel for our first guest speaker talk. I will be covering this talk in the next section!

The 2020 Election: The Democratic Party Part 1

In Case You Haven't Heard, My Body Means My Choice, So Deal With It

The Flint Water Crisis Is Affecting More People Than We Know, Including The Unborn

Is Benjamin Netanyahu Really Down for the Count?

To The Mothers Who Made Us The Feminists We Are Today

The Tea On The 16th Annual OSCARs Award Results