A peaceful day in  Jerusalem
Odyssey
Odyssey
CurrentlySwoonLifestyleHealth & WellnessStudent LifeStuffEntertainmentPolitics and ActivismSportsAdulting
ShopOdyssey UniversityAbout usAdvertiseTermsPrivacyDMCAContact us
® 2019 ODYSSEY
Welcome back
Sign in to comment to your favorite stories, participate in your community and interact with your friends
or
LOG IN WITH FACEBOOK
No account? Create one

Language is a powerful tool.

Welcome back! We are continuing on with our trek through the Muslim and Christian quarters of the Old City! Right now, we have come upon the Church of the Holy Sepulchre.

The Church of the Holy Sepulchre contains four of the fourteen stations of the Cross, including the two holiest sites in the world for Christians--the crucifixion and resurrection of Christ.

Upon walking into the church, we turned to the right and walked up a few flights of stairs. We saw a long line of people waiting to have their turn kissing the ground in a small box, and we learned that this was Calvary, or Golgotha. This was where Christians believed Jesus was crucified, and the kissing-of-the-ground-at-Calvary is an important ritual in any Christian pilgrimage.

Around the corner, there is the Rotunda. In the center of this area, there seems to be a shrine; this is where Christians believe Jesus was resurrected on the third day. J

ust like up the stairs at Calvary, there was a long line of believers who were waiting to walk into the shrine-like structure to see the empty tomb of Jesus Christ. Again, seeing this tomb where Jesus was believed to have risen and walked out of is an important part of the Christian pilgrimage.

Not only does this church contain many holy sites, it contains six different church denominations and many other groups that share responsibility in using and caring for the church. The six denominations that have laid a claim in the church are the Greek Orthodox, the Armenian Apostolic, the Roman Catholic, the Coptic Orthodox, Ethiopian Orthodox, and Syriac Orthodox. 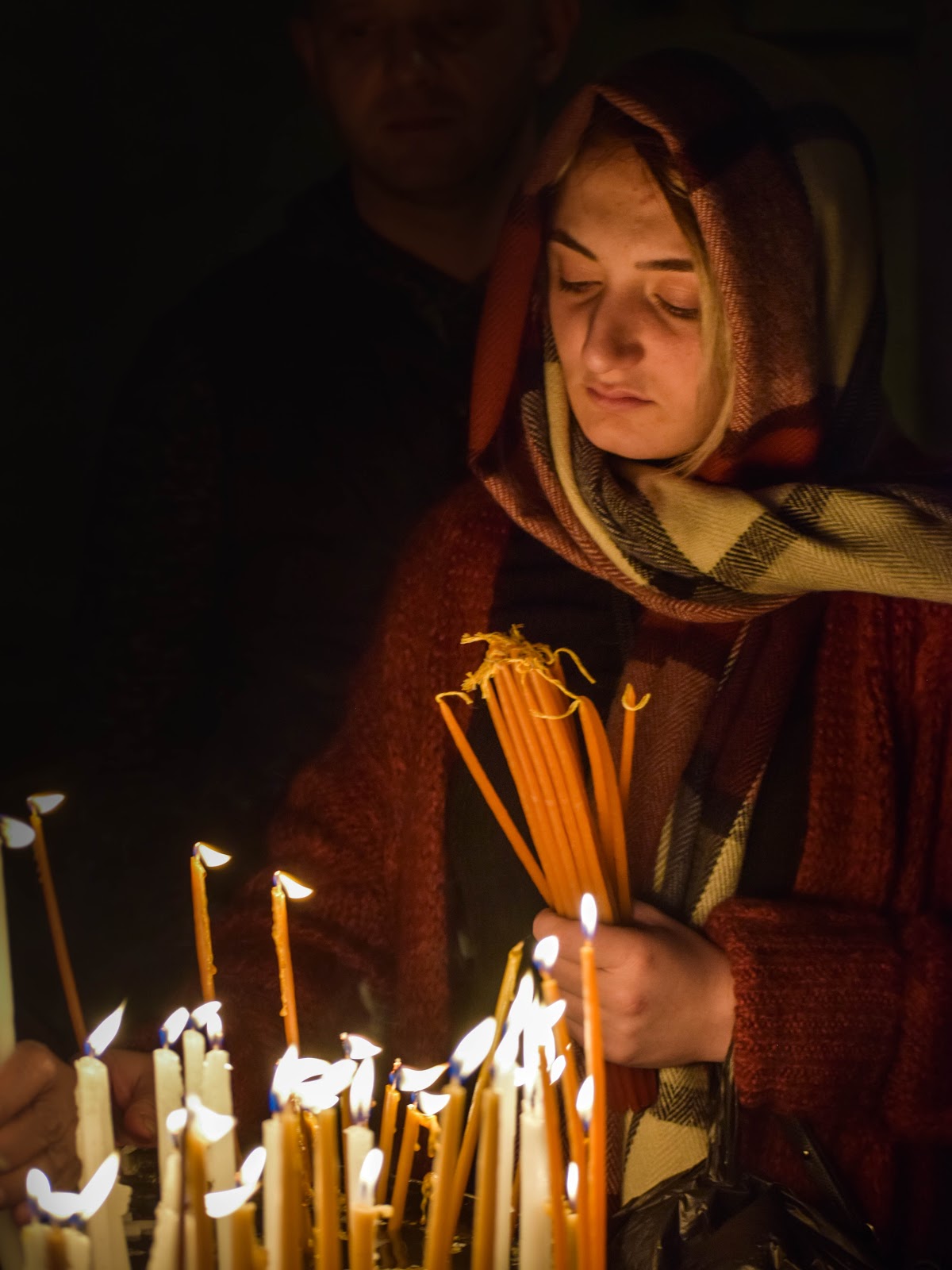 This type of sharing requires a great deal of mutual tolerance and respect--coexistence at its finest. As Americans, we often hear about violence that happens in the Old City, or just in the Israel and Palestine region in general. It seems to be every news story that comes out of the Church of the Holy Sepulchre is one of violence--a monk getting in a fight with another denomination, for example. There is actually one case of a violent story that came out of the difficult balance between all the denominations.

In 1853, it was decreed that no one shall disrupt the status quo of the church unless all the denominations agreed to do so. In 2002, a Coptic monk moved a chair into the shade on a hot summer day. Because he moved the chair without discussing it with all of the other denominations first, people took this as an act of threat; the Ethiopian Orthodox took offense and about a dozen people were actually hospitalized because of the resulting violence. However, they have learned their mistake and this kind of misunderstanding is very much so prevented today by everyone making efforts to not disturb the status quo again.

In fact, there is a ladder outside the front of the church, and it hasn't been moved in years for this very reason. Unless all denominations agree to move this so-called "Immovable Ladder," no one will move it.

We only seem to be hearing this violent side of the story because 364 days a year, there is no "story" to come out of the Church besides peaceful coexistence. The one day of the year that there is violence and tension, we hear about it. It seems like the only times we hear about this region are times of violence because we DO only hear about it when times are bad.

There are no breaking news stories about a peaceful day in Jerusalem because on most of the days, it is peaceful--and people are living, for the most part, in harmony. We have to be careful of the news we hear for this very reason. Even outside of stories about the Church of the Holy Sepulchre, we have to be mindful of ALL stories we hear in American news. There are infinitely more reporters stationed in Israel and Palestine than there are in regions like Syria, Iran, or Yemen and Saudi Arabia.

We hear about Israel and Palestine a lot more because the people stationed here need stories to write about, so they may, occasionally, exaggerate and inflate an event to come up with a story to tell. We don't hear about the bombings happening in Syria EVERY day because no American reporters are there writing stories about it every day.

There is a lot more to a region and its poeople than the narrow story that comes out of one American source--and I hope y'all know that my story is just one more small, small slice of the pie. I don't have a complete, objective picture of everything that is happening, and everything I say should be taken with a grain of salt.

I hope you've been enjoying reliving my trip just as much as I have. In the next section, I will talk about conversations I had in the Arab Bazaar and the rest of our first Saturday in this region!