How To Drink A White Claw

Drinking White Claws with Jesus has practically become a part of my normal routine. 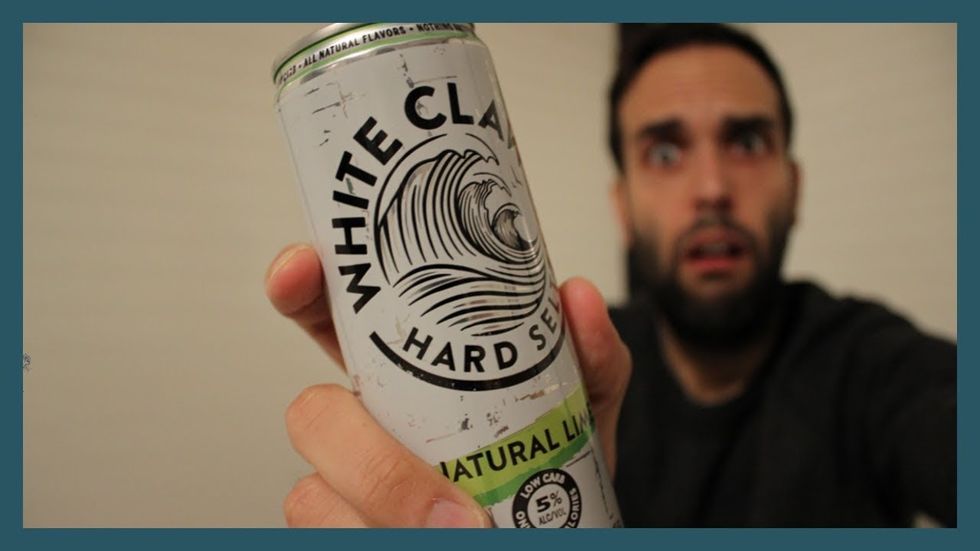 The past couple of weeks have been rather strange for me. Like, nothing too out of the ordinary, just slightly odd. I keep finding myself drinking White Claw Hard Seltzer with the Son of God Himself, Jesus Christ. Apparently, Jesus is like the biggest fan of White Claw ever, so he keeps descending from the Heavens on random occasions to toss back a few Claws. I'm not sure why I'm suddenly his go-to guy for when he's in the mood for a Claw, but it's looking that way for some reason. Here are the five times that Jesus and I have gotten a little White Claw crazy.

So there I was, watching a movie at home while sipping on a Black Cherry Claw. Suddenly, I saw a beam of light descend from the sky and before I knew it, Jesus Himself was standing right in front of me. He looked at me and said "My child, I have come back to this world because I must try the alcoholic seltzer beverage known as White Claw." I mean he's Jesus, so naturally, I gave him my Claw so he could take a sip. "Heavens above," Jesus replied. "This is better than holy water!" Jesus quickly chugged down the rest of the Claw, but then wanted more. I was down to get drunk with Jesus that night, so I grabbed a few more White Claws from the fridge and drank them with Jesus. Some nights just don't go how you expect them to, I guess.

2. The Time Jesus Needed Me To Buy Him A White Claw Variety Pack

So, I sort of thought that drinking White Claws with Jesus was going to be a one-time thing, but before I knew it, He showed up at my house again. He then asked me if I could please buy him a White Claw variety pack from the store. I was a little bit confused so I asked why Jesus couldn't just buy some White Claws himself, to which he said "bro, I'm the son of God, I don't have an ID. Plus, I'm a little bit cash strapped right now." The whole thing was a little strange, but I thought to myself, the guy did die on a cross so that I could live an eternal life free of sin or something like that, so I guess the least I can do is hook him up with some Claws. I got him a variety pack, which we shared. "In the name of the Father, the Son, and the White Claw," said Jesus as he shotgunned a Raspberry one.

This time, I was walking back to my car after work when of course, Jesus showed up with an insatiable craving for White Claws. I was like, seriously? Again? But, it's not like I really had a choice. At that point, Jesus told me to pop into the nearest convenience store and pick up some regular seltzer water. I was confused, so I asked Him if He would rather me pick up some White Claws instead. "No," he replied. "Trust me." I got the regular seltzer water and gave it to Jesus, at which point he simply waved his hand over it and transformed it into a variety pack of White Claw! But, not just any variety pack, one that also had Mango! It was one of the most incredible things I had ever seen. I said "Wow Jesus, that was so cool!" He then replied, "I can turn water into wine, obviously I can turn seltzer water into White Claw." Naturally, we each grabbed a Mango Claw. "Why do they serve wine in Church to represent my blood?" Jesus asked. "The only thing running through my veins is White Claw, bro."

4. The Time Jesus Almost Waged An All Out War On Truly Hard Seltzer

A short time later I was back at the store, buying White Claws for Jesus once again. Apparently, he's not really supposed to perform miracles relating to alcohol, so he wanted me to purchase another variety pack the old-fashioned way, even though it had no Mango. However, I had Jesus come into the store with me this time because he had never actually been inside a grocery store. We went into the area with all the alcohol, and as I was grabbing the Claws something caught Jesus' eye. He angrily exclaimed "Truly Hard Seltzer! What is this abomination? Why have anything other than White Claw? Why? There is only one true hard seltzer, just like there is only one true God! I shall call upon the armies of Heaven to destroy this travesty and restore peace to the world once again!" I watched Jesus start to summon an army of Heavenly Beings, as he equated drinking Truly to worshipping another deity other than Him. "Woah there, chill out Jesus!" I said. "Everyone knows White Claw is where it's at, Truly is nothing compared to the Claw." I was eventually able to calm Jesus down and have him call off the army, convincing him that White Claw and Truly are perfectly capable of co-existing. After that, we just chilled and drank some Ruby Grapefruit Claws.

5. The Time Jesus Was Upset Because God Was Being Mean To Him

I must admit, at this point I was getting a little annoyed with Jesus randomly showing up and wanting to drink White Claws with me. But, there He was again. I guess God wasn't too happy that Jesus was spending so much time on Earth drinking White Claws, so Jesus said to Him "Oh yeah, what are you going to do? Nail me to a cross?" Then naturally, Jesus descended to Earth to drink more Claws. As he chugged back a Natural Lime Claw, He said "don't nail me to a cross unless we drinkin Claws." He said He plans on adding that phrase to the Bible as soon as he gets a chance. Jesus and I drank a lot of White Claws that night. Like, a lot. I was super hungover the next morning.

Those are the five times that I have drank White Claws with the Messiah Himself, Jesus Christ. If you can't tell, Jesus really likes White Claws. I like them too, but not quite as much as Jesus does.