A Simi Valley Writer's Salute to Nancy Reagan
Odyssey
CurrentlySwoonLifestyleHealth & WellnessStudent LifeContent InspirationEntertainmentPolitics and ActivismSportsAdulting
About usAdvertiseTermsPrivacyDMCAContact us
® 2023 ODYSSEY
Welcome back
Sign in to comment to your favorite stories, participate in your community and interact with your friends
or
LOG IN WITH FACEBOOK
No account? Create one
Start writing a post
Politics and Activism

Because the Reagans shaped my town, my high school, and me. 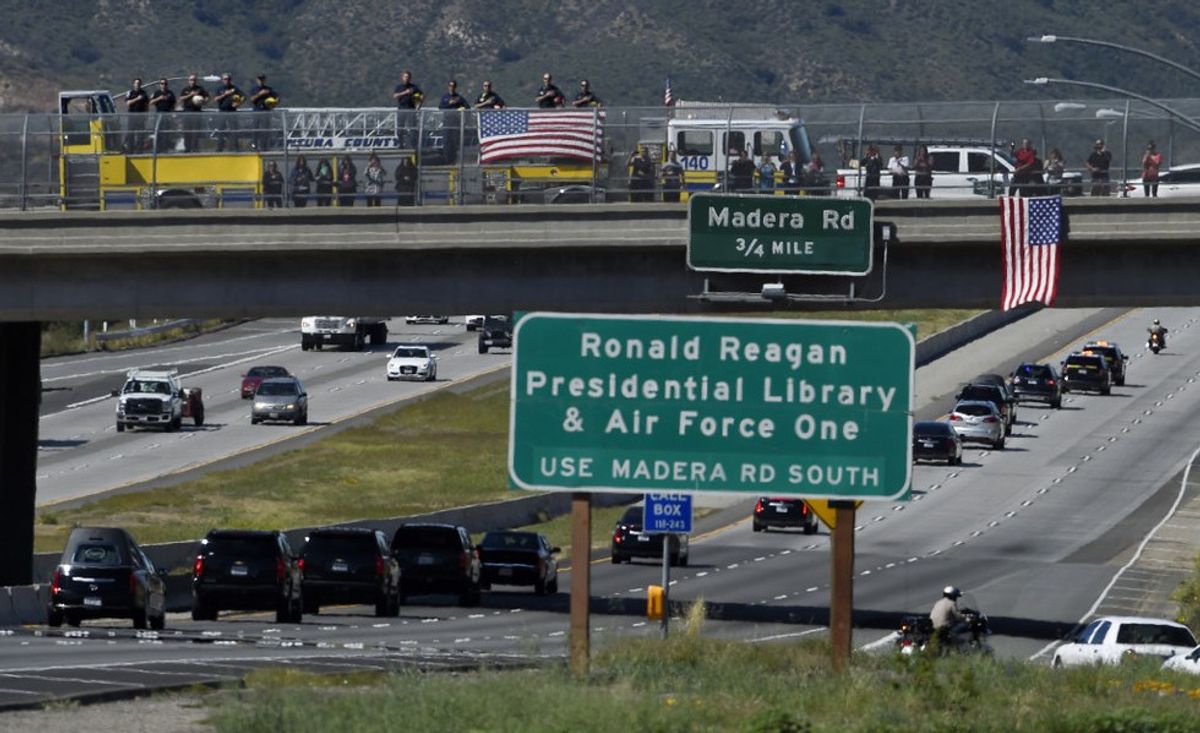 I grew up in Simi Valley, California. For those of you (OK, for most of you) who don’t know Simi, we have a connection with the Reagan family.

My hometown is the location of the Ronald Reagan Presidential Library. I worked for the last two years of high school to obtain the Ronald Reagan Diplomatic Seal (which was more for college applications and bragging rights than anything else). My mom worked at the Nancy Reagan Breast Center, I drove the 118 Ronald Reagan Freeway on a daily basis, and I still remember when the plane flew overhead after President Reagan’s passing. Heck, there was even a rumor going around that we were changing the name of my school from Royal High School to Ronald Reagan High School, and our new mascot was going to be the jelly bean (I stress the word "rumor" in that statement).

As for the library itself, ask anyone in Simi and they will tell you how beautiful it is, how exciting it is to go there for field trips and events, or even just for lunch dates with my mom (don’t even get me started on the chilli. I think that’s what I miss most). My family has passes to the library like other Californians do for Disneyland (side note – did anyone see the Disney exhibit the library put on a few years ago? One of many favorites). The people are wonderful, the atmosphere is friendly and warm, and the location is prime – on a clear day you can see all the way over the valley, pass the mountains, and catch a glimpse of the ocean and islands.

So when I heard of Nancy Reagan’s passing this past week, it hit home. This was a woman who I grew up hearing about. A woman I continuously learned more and more about from all the time spent at the library, admiring both her clothes on display in one room and her strength and love displayed in every room. Sure, President Reagan was an admirable and incredible man – but there is no way you can sit here and tell me it was not in large part due to his wife.

She was an actress, an avid believer in astrology, and a campaigner against drugs (you know that little old saying “Just Say No”). She had a voice and used it for good, while still making sure others’ voices were heard.

I head back to California in just a couple days. I’ll enjoy the sun, I’ll enjoy having time to sleep, and I’ll certainly enjoy an afternoon at the Reagan – although a few moments will possibly be a bit nostalgic as I pay my respects to a beautiful and courageous woman. Because if I didn’t spend time there – I wouldn’t really have visited home.

QueenRadhi
The State University of New York at Stony Brook
2607