"He hugged Krignon close to his chest and ripped loose the cord on his chute. He watched it flower above them, yanked by the wind but at least open. Then he blacked out." 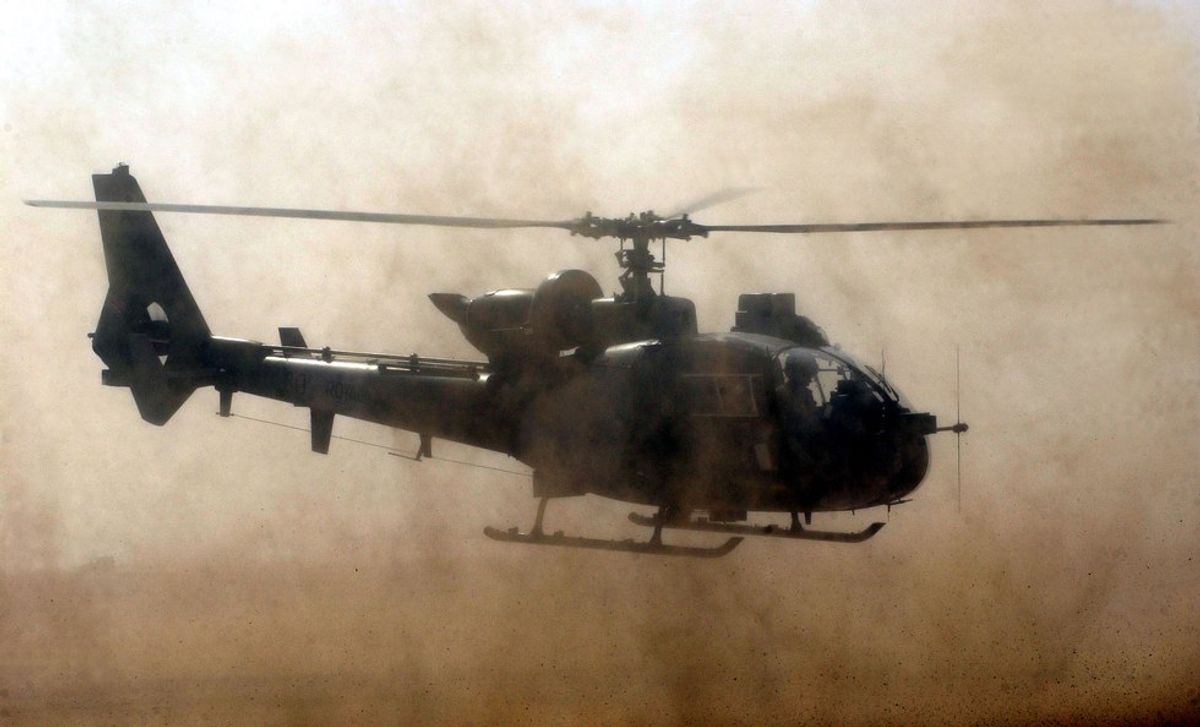 Need to catch up? Click to read Scene 1 from Shroud of Darkness, "The Black Cloud".

She lifted her arm, shielding her eyes for a brief respite from the kicked up dust. The Blackhawk chopper blades were going strong. Reaching up, she lowered her the visor on her helmet and covered her eyes.

Leila, or newly appointed Lieutenant Krignon as she was now known, wasn’t nervous. Her feet didn’t tap, she didn’t rub her dog tags – she didn’t even glance around her chopper or the helipad. She was used to search and rescue missions, though she wished they were fewer and farther between.

She clicked on her mic. “Tower, this is tango-alpha-golf-three-zero, preparing for takeoff. Weather still clear?”

Static filled the cockpit, then, “Tango-alpha, we have blue skies and no clouds from here to Houston!”

She glanced to the right and saw a green and tan figure running towards her, head ducked down, avoiding the chopper blades. He vanished amidst the swirling desert dust under the chopper, reappearing as he swung himself up into the cockpit. Lieutenant Powers smiled at Krignon as he wiped the grainy dirt out of his eyes and settled into the co-pilot chair.

“I was about to leave you!” she kidded.

“Never,” he said. “You wouldn’t make it far in this desert without yours truly, DC girl.”

“Let’s roll then,” she said, tossing his helmet to him. He strapped it on and lowered his visor.

She nudged the throttle forward, and the chopper’s nose leaned up and forward into the afternoon sun. They rose steadily, climbing high enough to soar over their base and towards the desert mountains.

Shadows from incoming clouds tried to play tricks on their eyes as they scanned the desert. But to Krignon’s lessening hope, she didn’t think there was anyone here to rescue. They had been searching grid by grid, to no avail.

“Intel had John Doe at these coordinates, right?” Krignon asked, glancing over at her co-pilot.

“Roger.” Powers poured over the map in his lap, then checked readings on their chopper dashboard.

A newscast chopper from the closest big city had spotted their wandering John Doe and called it in to their base. Krignon and Powers were pros at their jobs...but twilight was coming fast and with it would be record low temperatures. She shivered.

“Where are you?” muttered Krignon, gazing down at the endless and darkening desert.

“Right here!” chirped Powers. The twinkle in his eyes vanished as Krignon scowled at him through her visor.

The chopper jolted and both whipped around, peering at the horizon. Krignon steadied the throttle, knuckles white. She realized that what she had thought was the onset of twilight was actually...well, she wasn’t sure.

She saw lightning. And what had been Carolina blue skies just a half hour ago now resembled black and purple bruises peppering the sky. If this was a storm, it was like none that she had ever seen before. Krignon’s shoulders tensed. Their John Doe’s chances of survival just dropped. If she was Spock from Star Trek, she would have been quoting negative percentage rates right about now.

Krignon gripped the throttle, trying to drive their chopper as tailwinds swept behind them, thrusting them towards the darkness. It was coming faster now, and no matter how hard she tried to fight the wind, they kept being suctioned into the storm.

“How did the newscast chopper see our stranded John Doe and call it in, but fail to mention the beast that ate the sun?” she said sardonically.

Powers responded, ”Newscasters are like college kids. They come out for the fun and games, and flee far and fast when the monsters in the dark come.”

Krignon grumbled, “Monsters in the dark are all that city news covers.”

Powers adjusted his mic. “Base, this is tango-alpha-golf checking in. We have a desert storm coming up, strong tailwind, lightning, the whole shebang. John Doe is a no-show.”

No static, no voice, nothing. Powers fidgeted with the comms knob. He was rewarded with a little static, then crackling and sputtering. Smoke rose from the dashboard. The control was gone.

As the smoke rose from the dash, other instruments projected additional haywire readings. Alarms sounded and the sooty fog within the cockpit prevented any quick response from the pilots. Meanwhile, the chopper listed more. Krignon, desperately trying to wrench it forward again, was failing.

“Get the gas masks!” Krignon shouted at Powers. She spoke into her mic, “Mayday, mayday, mayday! For anyone listening, this is tango-alpha-golf-three-zero on search and rescue. Our chopper is going down, coordinates thr –.”

The wind tossed the chopper on its side, knocking the two pilots hard against their seats like maracas. Their harnesses were like weak babies compared to the strength of this storm. Powers struggled, and nudged his visor back, squinting at Krignon. Her mouth gaped and her body hung loose in her safety harness. She was unconscious.

Outside, the whole world was dark. No stars, no light, no hope. Powers slowly raised his hand, unsteadily releasing himself from the seat. His hand and arm shook violently, like all nerve-endings had fried with the chopper's instruments. The helicopter continued bucking, slowing Powers as he reached over to Krignon and unstrapped her with his good hand from everything other than her parachute. He grabbed her arm, tore the cockpit door next to him open, and jumped.

They plummeted. Even though he couldn’t see the ground, Powers knew it was coming. He hugged Krignon close to his chest and ripped loose the cord on his chute.

He watched it flower above them, yanked by the wind but at least open. Then he blacked out.