Dear People who voted for Trump. I am not mad at you, but I am wondering why. I am confused as how you would elect a man that allowed hate to rule his heart. I stand for everyone to have an equal chance at a happy life in America. I will not sit down, I will not be quiet, I will fight for what is right! 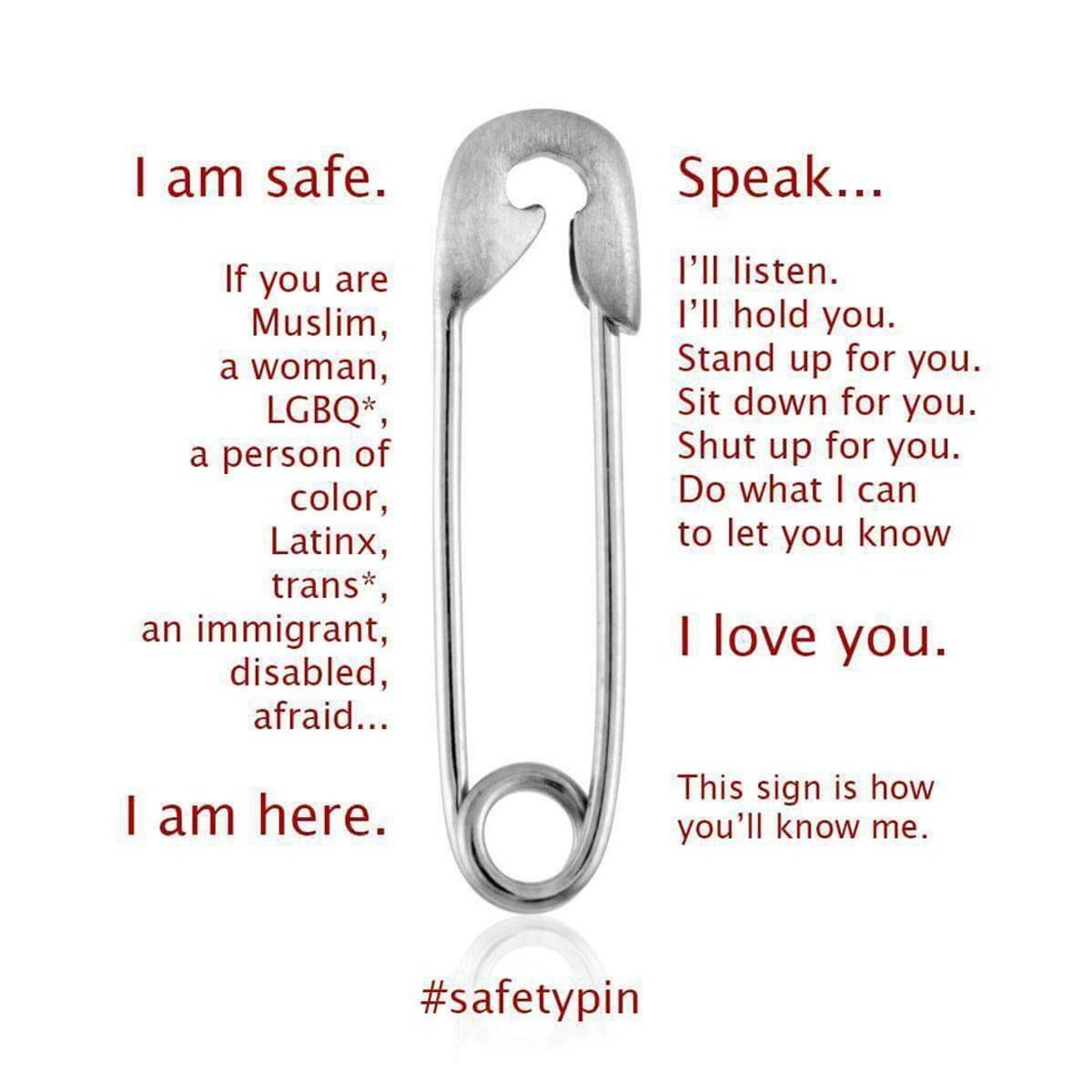 Many people took to the polls this past Monday and Tuesday in order to cast their vote for the most respectable and influential position in America: the president. Tuesday night many televisions and laptops were on and following the outcome of the electoral college. I watched in horror as many states lit up with red, and I thought, "If California is secured, we still have a chance." I watched California turn blue as I was working on my Spanish paper, which was due on Wednesday. Before I knew it, there were around seven more states who had not switched yet, and they were predicted to be red.

Over the course of the past few days, tensions have been high. Protests have been occurring and discrimination is at an all time high. I have been Black my entire life. I was born Black, I will live Black, and I will die Black. I have known how hateful and unfair the American version of equality is my entire life. I have never seen people so scared to be afraid of who they are. I have never seen tears coming down from the eyes of children because they are afraid that President Trump will take their parents away. I have never seen women huddling together with fear and tears in their eyes due to their President viewing them as objects and allowing rape culture to become more prominent. I have never seen people so upset to live in America. I have never heard, "Not again." I never experienced these things until Donald Trump was elected President. My entire life I have known what it feels like to be ridiculed by the way you look, speak, and carry yourself. Never have I ever, thought America would elect someone that does this to every community that does not possess Hitler's ideal race.

Dear Republicans who call the people who are protesting whiny and who toot their horns because their candidate has won: show some damn sympathy. To a lot of people, Hillary was not the best candidate. Hillary was not who a lot of people wanted to represent them. Hillary was not our first choice as the President of the United States of America, but she was our only choice to ensure the safety of our friends and family. She was our last hope to a safe environment where everyone could be who they wanted and love who they wanted without being judged and without their beatings on the street being condoned. People are crying out for help. They are crying for the people who voted for Trump to stand with them and fight for their rights if need be. They are crying for the right to be an American citizen and a human being. They are not upset because Hillary lost. They are upset because a man was elected who built his campaign on fear, talked negatively about women, mocked a disabled news reporter, thinks that building a wall will be great, and condones the discrimination of others based on religion.

For you, it could have been just a political election, but for others, it was the choice between life and hell.

1. Why Are People Protesting?

People are protesting due to the stances that Donald Trump has taken that threatens human rights. For instance, his Vice President, Mike Pence, believes in conversion therapy for homosexuals. He would rather fund conversion therapy than AIDS research. AIDS is not a homosexual disease, it is a disease that takes the lives of many children and adults. Pence wants to take away the choice of women when it comes to their unborn children. He also wants to ban gay marriage and make ones that exist criminal. Trump is supported by a hate group, known as the KKK and he wants to ban Muslims. These things look like a violation of rights, it sounds like a violation of rights. Therefore, it is a violation of human rights. People are protesting to show they want and deserve their rights as humans.

2. Why Is This Not People Being Sore Losers?

In the words of Amy Gravino,

It's not about "unfair." This is not a fifth grade softball team throwing a fit because they didn't win a game. For many, many people, this is about life and death. A man with no experience, no qualifications, and possibly the worst temperament imaginable has been given the reins of power, and everything he stands for (racism, misogyny, ableism, anti-intellectualism) has been legitimized. People are frightened and upset because they're afraid they are going to die, either because of Trump himself or because of his legions of radical supporters. Those who are against Trump are fighting not just for themselves, but for the sake of their children's ad loved ones/friends' future.

Now I have some questions for people who supported Trump and his campaign?

1. Do You Understand Why People Are angry?

2. If you are not racist, xenophobic, homophobic, or sexist how could you support a man who is spewing hate towards these communities?

3. What policies are you in favor of that Trump is going to place?

Therefore, I call for you to see these people as human beings. I am sorry that the people who voted for Trump feel targeted and I am sorry that the people who voted for Trump feel like they are being discriminated against. If you have these feelings speak up. Show that you voted for Trump based on his policies and not his hateful character. Show that when casting your vote, his policies were the only thing you had in mind. Show that it did not occur to you how much fear he would put amongst the American people. Show that your privilege may have gotten in the way. You have to speak up! You cannot be silent and then wonder why people view you as hateful. If you agree with everything about Trump, then I cannot help you. But if you feel that Trump is wrong in the way that he targeted groups of people, it might help your case to speak up about that.

I will respect Trump's position is office, which means I will call him the president. But I refuse to let him take away rights from my brothers and sisters without stepping in. I can respect someone and have a difference of opinion. I can respect someone and protest against a wall that they are trying to build. I can respect someone and realize that love is strong, and everyone should be able to love who they want. I do not hate Donald Trump. I will not hate him, like I feel like he hates a lot of Americans. I hope he does a good job in his presidency, but I will fight for my rights to be an American citizen and to live peacefully and happily.

This election was not just about politics, and if you feel like it was, it might be time to check your privilege.