I Wanted To Know What It Felt Like To Shoot The Most Popular Gun In The U.S. So I Shot It

The most popular gun purchased in the last several years is a Glock-19, and I shot it. 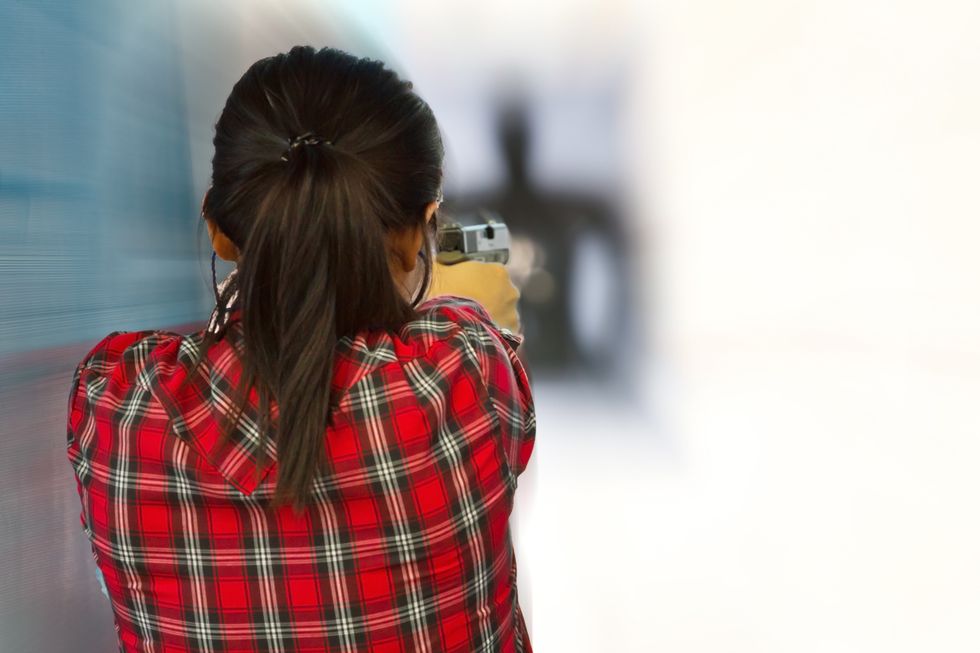 I wasn't sure what to expect when I entered the local gun store. I believe in the 2nd amendment and, as a veteran, had to qualify in boot camp, many years ago. The store was organized with rifles on the walls and handguns in the glass cases outlining the store. There were several people in the store and to my surprise, it was not predominately male.

I met the manager to go over the procedure for purchasing a firearm. He pulled out the AFT form 4473. It is a D.O.J. form titled, "Firearms Transaction Record," and a customer must fill out the first page for a background check before making a firearm purchase. This requires two forms of identification - one must be proof of residence in the state of Florida. The manager stated that in most cases, the background check takes 30 minutes and if a customer has a concealed weapon permit, that customer can leave with their purchase immediately. Otherwise, a 3-day waiting or "cooling off" period is required. In some counties in Florida, it's five days.

The manager told me the most popular gun purchased in the last several years is a Glock-19, and that it's popular with both sexes. I asked about the assault rifles used in recent mass shootings and he stated they don't get a lot of purchases in the store for them. That led me to ask if a customer wants to buy more than one gun is that a warning. His replied, "only if it is a lot of assault rifles would they refuse to sell."

My follow-up question: "Is there a warning sign when a customer purchases a lot of ammunition?"

He stated most large quantities of ammo are used in their shooting range upon purchase. In addition, the cost of ammo is high and to stockpile, it would be very expensive. The manager also insisted they have extensive training and most of the sales associates go by their gut feeling when dealing with a customer.

To understand the glamour or draw (for a better word), I rented a firearm and went into the shooting range. It was a Glock 17- 9MM that holds 17 rounds, which comes in packs of 50. Before entering the range, the manager walked me through the details of the gun. As I held the cold steel weapon in my hands, he gave me detailed instructions. At that moment my pulse increased, and I had this unfamiliar feeling racing through my body.

First, always point it at the floor, and never put your finger on the trigger until you are ready to shoot. Hold the gun in your favored hand and point your index finger straight out. After a lesson on loading the cartridge with ammo, I selected my target and put on my safety glasses and noise guard. Another associate escorted me to the range and stayed with me during the entire experience.

He put the weapon on the ledge in front of us, barrel pointing away. With his help, we loaded the cartridge with the ammunition. I put 15 rounds in, and he walked me through the process of loading the gun. We set the target at 15 feet, he told me the best way to stand, and what to expect when I pull the trigger.

I stood there, my heart was racing, my arms heavy as I found the site and aimed at the bullseye. My first three shots clustered outside left of the bullseye in the 10 range. He said I was doing very well and told me to keep going. I adjusted my site and kept shooting until the chamber emptied. The recoil was unnerving. The shells flew out of the chamber in red-hot flares past me, a few hit my arm or my safety glasses.

He encouraged me to keep going even though, after the first 15 shots, I was ready to quit. He moved the target back to 20 feet and I loaded the Glock and I kept shooting. The Glock was heavier in my hands with every shot, and I was shaking and sweating. I jumped every time someone else shot their weapon - the noise went through me like a crack of thunder. When I loaded the last five rounds, he moved the target to 10 feet and I shot them off as quickly as I could.

I needed to get out of there. I had convinced myself that it was just like shooting targets with a BB gun at an amusement park. But the reverberations of the echoing rounds proved to be overwhelming. It wasn't an innocent toy that rang bells and made things twirl, it was a weapon used to injure or kill. My fight or flight instinct kicked in and that scared me even more. He asked me if I wanted to go again and I shook my head and headed for the exit.

He pulled the target in and at the register we looked at the holes in the paper silhouette. I'm guessing he was encouraging me to buy more rounds because he said I did very well for my first time. The cashier looked it over and said, "Not bad, you hit the spleen, liver, and look you even hit the heart." My response was, "It's not like it was a real person coming at me."

guns
Report this Content
This article has not been reviewed by Odyssey HQ and solely reflects the ideas and opinions of the creator.