Think about how you were when you turned 18. 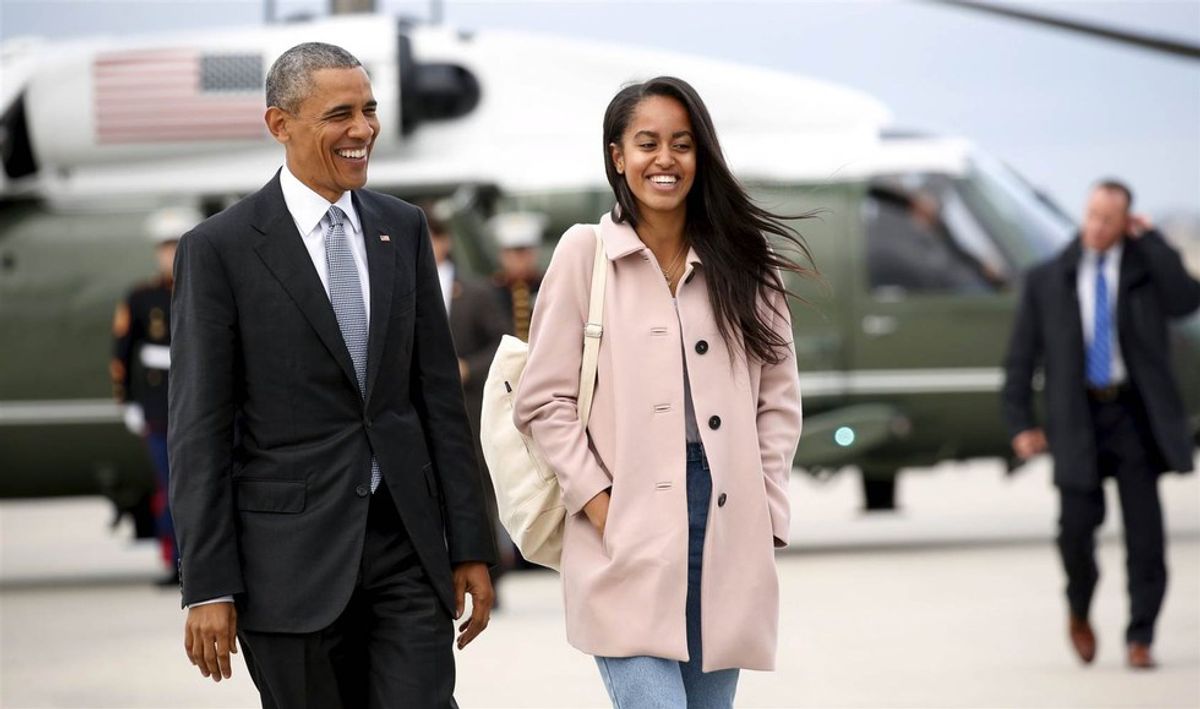 There's been a lot of talk in the news when it comes to the topic of the President’s daughter "turning up". Malia Obama is about to leave the White House now, she's out and ready to enjoy life. Unfortunately, she has a group of paparazzi that's following her every move and ready for her to make any little mistake so that they could run a scandalous story about her.

Now let’s take a minute and assess this situation. This is a child who has grown up under strict guidelines. Being the President’s daughter isn't easy. Malia and her sister Sasha have lived in the White House their whole life. This family is the first African-American family to be in the White House. Any little mistake they made cause them to be criticized and judged for it. It’s already hard growing up black in today’s society and being the President’s daughter on top of that doesn't help. Now this young teenager is out on her own getting ready to go to college and growing up as a young adult. Malia has a chose to do whatever she wants, whenever she wants, and no one can stop her that just like any other child.

In saying all of that, I want everyone to think back to the day you got a little freedom from your parents. I want everyone to think about all the temptations you faced the first day your parents let you go. Think about the first party you attended, maybe it wasn't considered twerking back then, but you were still out there shaking your hind parts enjoying time with your friends. Maybe think about that first time you went out with your homies and someone passed you the joint or asked you' if you wanted a light'. Just like any other human being out there, Malia Obama did something all teenagers would do when given the opportunity. She had a little freedom and she decided to let loose for a minute or two, but unfortunately for her, she's getting all kinds of hate from the public because she is "The President’s daughter" and she must not ever make any mistakes. Have we ever heard her speak or voice her opinion? She has lived a very restrictive lifestyle with secret service around her all the time!

I'm going to compare this is my life for a moment. I am a preacher’s daughter, which means I am held to a higher standard than others. You might think I'm lying or you don't believe me, but trust me when I say people judge me all the time because my father is a "Man of God". There is a certain expectation I feel others want me to live up to in order to be called a preacher’s daughter.

For instance, I have to be on my P's and Q's at all times. I must not make any mistakes. I must always be on my best behavior at all times and I must not be seen with the wrong people. I must stay involved in the church and I must not be "Freaky" (whatever that means) because of course, all preachers daughters are the freakiest girls right? I must always pray before I eat every meal and I must be the most perfect child you have ever met. This is all because my father accepted the calling of being a preacher.

Just like any other PK (preacher’s kid) out there, we all know if you make one mistake everyone is going to judge you. I was like that at a point in my life. I was at the parties with my friends having a good time. As a person, I chose not to give into all those pressure of being a teenager….. but that's me. She decided to go the other route, but neither of us was wrong for it. It’s just a way of life and we all make our own choices. What Malia and I both have in common is that if we do any little thing the whole world is going to act like we're just some devil’s children that can’t be tamed!

So before everyone starts looking at this girl with a critical eye, look in the mirror or maybe at your own child. We've all been through peer pressure and it can be one of the hardest obstacles we face in life. Just because this girl is going through her transitional stage, doesn't mean she's not still a wonderful girl. Eventually, she's going to realize that what she is doing is not the best for her image, but at least let she would have learned from her own experiences. We don't want her so boxed in that she just can't handle herself at all.

Please remember that this child is still human; she has feelings and emotions. Words hurt people. I do ask that you be mindful of what you say. There are plenty of parents out there who don't want anyone talking about their daughter the way people are talking about Malia. So, just let the girl has some space to breathe and make some mistakes. If Malia wants to live a little let her. All we can do is let her enjoy her college experience. Eventually, she will wake up and realize she needs to get it together; just like any other teenager out there. Don't forget SHE IS STILL A TEENAGER!