I'm seriously ready to go back 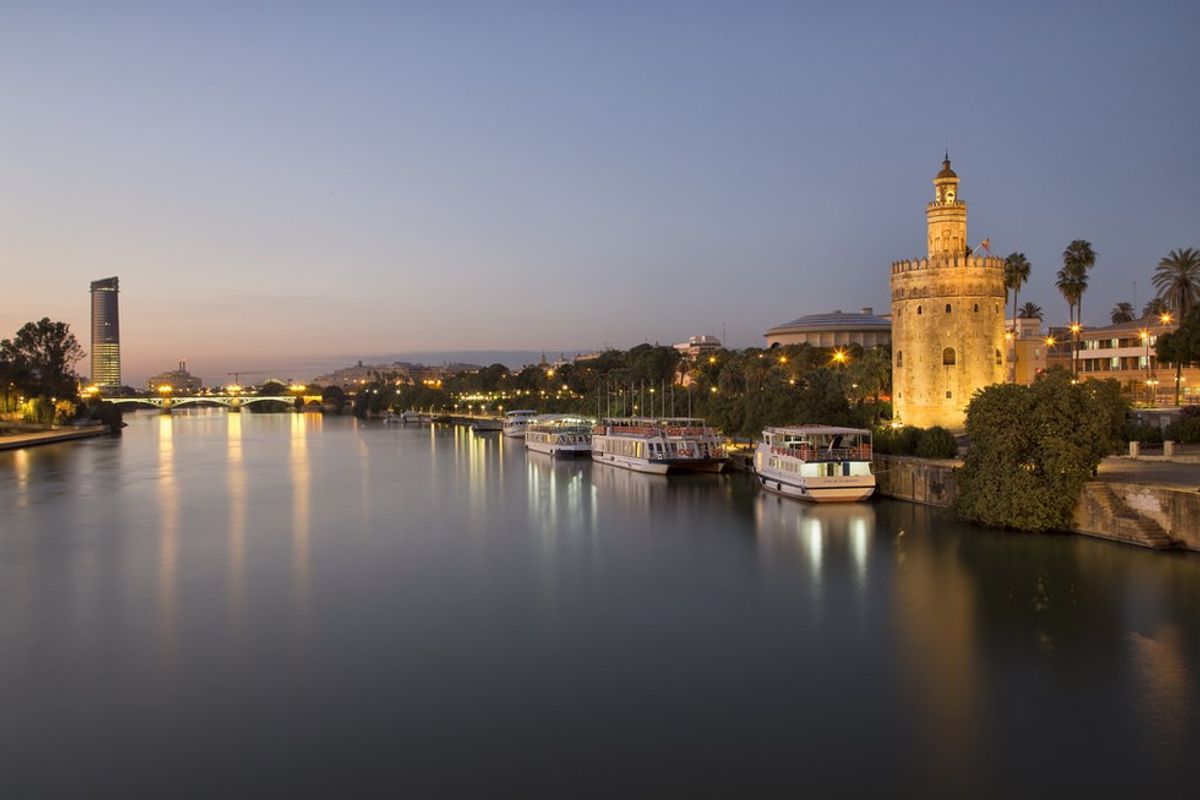 As I said in my article about travelling Europe, I spent nearly four months living in Seville, Spain last fall, and I now think it's the greatest city in the world. It's a huge tourist stop for many people touring Spain, but they frequently don't realize that just because it's relatively small (for a city), that doesn't mean that it has less to offer than Madrid or Barcelona. In fact, I think its uniquely old charm gives it even more! Here are some of my favorite things to do in Seville (Spanish spelling: Sevilla).

Seville has a rich history of Pagan, Muslim, Jewish and Catholic origins that go all the way back to Rome. Once a walled city, it has now expanded across the river and far out from its old Jewish quarter, annexing some of its suburbs in the process. Downtown Seville, in the old sector of town, is a unique mix of all the architectural styles of its past occupants combined with a style that's uniquely Andalusian, mudejar, or the Spanish mimicry of Moorish Muslim architecture. Even in my neighborhood (Nervión), which once a suburb and is noticeably more modern than "El Centro," you can find the ruins of Roman aquaducts in the middle of a busy 21st century street.

The city has kept its uniquely historic feel through an unspoken rule, broken only recently, in which no buildings should ever be taller than the ancient Giralda. A skyscraper has since been constructed in town, but it is far enough away from the city's history that it does not mar the beautiful "skyline."

As I've previously said, the Plaza de España was built for the 1929 Ibero-American Exposition that took place in Seville. The building is gorgeous, and surrounds a pool and fountain with bridges leading over the attached canals. It was built in the beautiful Parque de Maria Luisa, and was intended to showcase all of Spain's technological advancements.

The building now holds government offices. This is all really cool, but my favorite part of the structure is that it was built with tiled nooks, one for each of Spain's provinces. Some of the tile is in need of repair, but the detail is incredible and accurately portrays the different cultures of each distinct area of Spain.

Like I said, the Plaza de España is inside of the Parque de Maria Luisa, the city's most beautiful park. Take a stroll through the park's many paths, visit the buildings that dot the landscape (originally one for each country from the Americas that attended the exposition, although many have been repurposed or remodeled in the years since), and go on a horse and carriage ride, if time permits. We did this on one of our first days in the city, and it was an experience I'll never forget. The park is also an amazing place to go for runs, if you are so inclined.

Seville's Cathedral is the largest Gothic cathedral in the world, and only second in size to St. Peter's Basilica in all of Europe. It has a fascinating history - originally built in the time of Moorish occupation, the cathedral was originally a Muslim mosque that was built over to create the impressive structure we see today. Little of the mosque remains, but the cathedral's crowning structure, la Giralda, is the exception to that rule. La Giralda was built as a location for workers at the mosque to ring for prayer time across the city five times a day. The tower has ramps instead of stairs so that the runners could ride donkeys or horses up (because la Giralda is tall), but the ramps don't make it any less strenuous of a climb now. The tower also went through years of renovations to reach the Moorish-European architectural mix that we see today.

The climb can be a lot, but the view of the city (not to mention the top of the cathedral) is totally worth it. The cathedral itself houses countless beautiful artifacts including the (possible) tomb of Christopher Columbus, who started his journey west from Seville on the river Guadalquivir, as Seville was once the seat of both the maritime world and the Catholic Monarchs, Ferdinand and Isabella. Word of warning: never say anything bad about Christopher Columbus while in Seville, or you'll be eaten alive.

The Real Alcázar is another remnant from Seville's Moorish past. Built to house the Muslim ruler of Seville, it has been used and renovated ever since and is currently the oldest functioning castle in all of Spain. The downstairs is open to the public, and the upstairs is reserved for the use of the Spanish royal family whenever they visit Seville. Due to its mixed history (much like the rest of Seville), it is possible to see many different architectural styles while exploring its halls and gardens. The gardens were most recently used to film the last season of "Game of Thrones." (I'm still mad I didn't get to see any of the cast while they were there.)

El Metropol Parasol is a much newer addition to Seville, but still one of my favorites. The large sculpture has been claimed to be the largest wooden structure in the world, and is colloquially known as "las Setas" or "the Mushrooms" due to their fungal appearance. The plaza itself used to be an open-air market that was torn down to create space for new construction, but ancient ruins were discovered under the spot, so las Setas were built instead.

The bottom floor houses an entrance to the ruins, but the climb to the top provides a truly breathtaking view of the city that I actually prefer to la Giralda due to its amazing versatility. Look out for the Cathedral, the bull rink, and the new skyscraper across the river while looking out. Spaced throughout the open-air viewing platform are binoculars with descriptions and histories of the buildings you can see in each direction.

Other attractions include the bull rink (really cool but not at all my style), the General Archive of the Indies (aka the home of all the records ever kept by Spanish explorations of the Americas, and also a world heritage site), the Museo Del Castillo De San Jorge (a museum of the Spanish Inquisition), and the Torre del Oro (a 13th century military watchtower on the river that was rumored to be the home of all the gold found in the Americas, and now houses a maritime museum. Go for the tower, not the museum).

Explore the neighborhoods of Triana and El Centro, get lost in the Jewish quarter (you will get lost), and spend time touring the Universidad de Sevilla, housed in the historic Seville cigar factory (aka the site of Carmen). Sports fans can visit either soccer stadium, that of Sevilla Futbol Club or Real Betis, but just know that you'll have to pick a side (I chose Sevilla-- they're better, older, and I lived a block from the stadium).

Spend your meals in a quaint restaurant behind the cathedral, in the fancy Abades Triana on the far side of the river, or inside either the Mercado de Triana or the brand new market on the near side of the Guadalquivir (conveniently located right next to the city's best churros and chocolate stand, a definitely must).

I could go on about Seville for another thousand words (at least), but just know this: Sevilla (Say-vee-ya) is a beautiful, historical city that definitely deserves your attention.