Severus Snape Is Not A Hero
Odyssey

Severus Snape Is Not A Hero

Or, why Severus Snape is the actual worst. 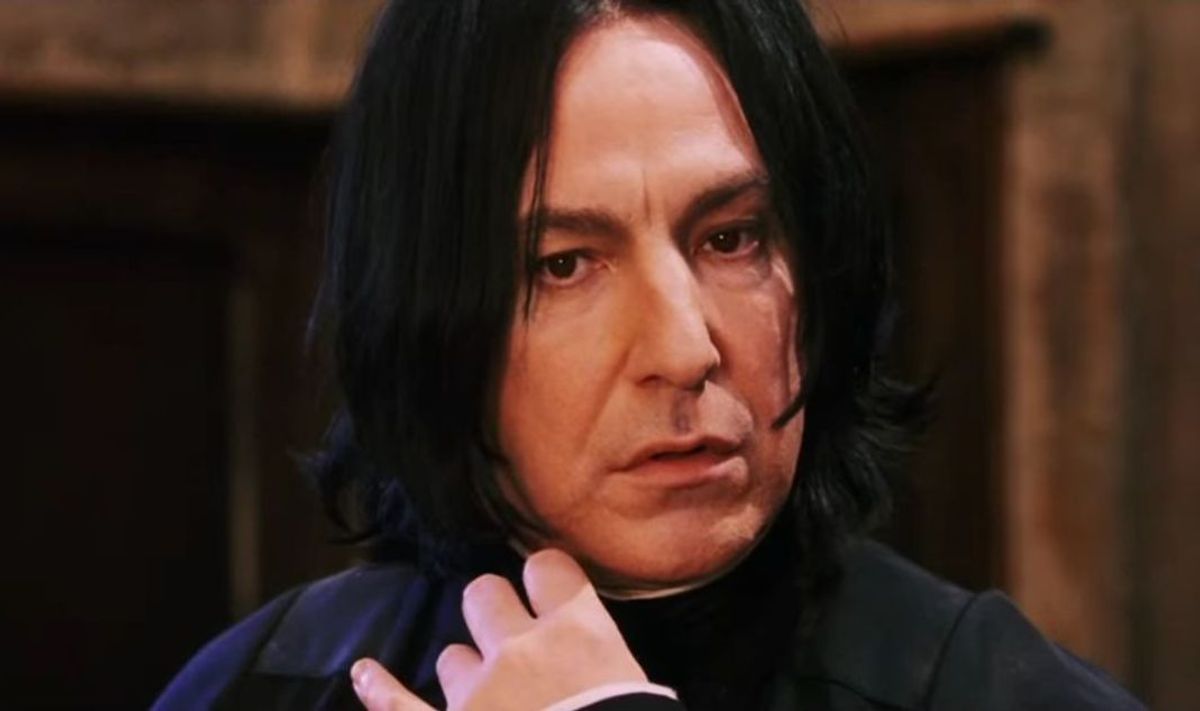 The world of Harry Potter is filled with gray characters, ones who are neither fully good nor fully bad; in that, they are much like real people. One such gray character is Severus Snape. However, many fans and J.K. Rowling herself often excuse Severus Snape’s actions because he was in love with Lily Potter (née Evans) and supposedly sacrificed himself to save Harry. In reality, Snape is more black than white, and he deserves little praise or adoration because he was obsessive and a bully.

Severus Snape was not in love with Lily; in fact, he was obsessed with her. The language Rowling uses throughout the earliest memories Snape has of Lily indicate something that is not love: “There was undisguised greed in his thin face as he watched the younger of the two girls swinging higher and higher than her sister;” “His black eyes, eager in the greenish gloom, moved over the pale face, the dark red hair;” and “He watched her as greedily as he had watched her in the playground” (Rowling, Harry Potter and the Deathly Hallows 663, 666, 667). To take this obsession even further, Snape’s Patronus is a doe, the same as Lily’s. Many call this romantic; it is not. What is romantic is having Patronuses that are a pair, such as James Potter’s stag and Lily’s doe or Ron Weasley’s Jack Russell terrier and Hermione Granger’s otter. Dumbledore, however, seems to think it is romantic, which leads to the famous “After all this time?” “Always” moment between him and Snape in Deathly Hallows, but Dumbledore is not always right (which is an essay for another time). After Lily’s death, Dumbledore convinces Snape to join his side, but it is not a stretch to say that, if Lily had not died or even if Voldemort had chosen Neville Longbottom as the subject of the prophecy, Snape would still be a Death Eater. He only reforms because Lily sacrificed herself to save Harry, whom Dumbledore is now asking Snape to help protect.

Perhaps, perhaps Snape’s obsession with Lily could be excused and we could write him off as a gray character, but only if he had not been openly abusive to Lily’s son, the boy he promised Dumbledore he would protect. It is not Harry’s fault Voldemort killed the woman Snape loved, yet Snape constantly acts as if it is. From Harry’s very first day at Hogwarts, he senses the professor does not “like Harry at all” (Rowling, Harry Potter and the Sorcerer’s Stone 126). The book later states: “At the start-of-term banquet, Harry had gotten the idea that Professor Snape disliked him. By the end of the first Potions lesson, he knew he’d been wrong. Snape didn’t dislike Harry—he hated him” (Rowling, “Sorcerer’s Stone” 136).

Another young student Snape bullied was Neville Longbottom, a Gryffindor in Harry’s year. If Voldemort had chosen differently after hearing the prophecy, Neville might have been his target instead of Harry. However, it is likely Snape did not know that someone else could have died instead of Lily, and that would not be an excuse for bullying the boy besides. Through-out the course of the series, Snape repeatedly picks on Neville, starting in Sorcerer’s Stone where he calls Neville—an eleven-year-old boy—an idiot for messing up his potion on the first day of class, and he blames Harry for not correcting Neville. Prisoner of Azkaban is ripe with further examples of Snape’s abuse. From the first week of classes, it is stated, “Neville regularly went to pieces in Potions lessons; it was his worst subject, and his great fear of Professor Snape made things ten times worse” (Rowling, “Prisoner of Azkaban” 125). A little later in that scene, Snape mocks Neville’s mistake and says, “‘Longbottom, at the end of this lesson we will feed a few drops of this potion to your toad and see what happens. Perhaps that will encourage you to do it properly’” (Rowling, “Prisoner of Azkaban” 126). In that scene, Neville is a 13-year-old boy; if he is struggling to learn something, he should not be punished with the death of his pet. Instead, a good teacher would tutor the student or set extra homework to help his or her pupil improve.

Snape bullies most of his students, but another one that he singles out is Hermione Granger. Hermione is intelligent and eager-to-please, but Snape never likes when she knows the answer to his questions in class. Hermione is also willing to help others learn; when Neville was struggling with his potion in Prisoner of Azkaban, she offers to help him fix it. Snape interrupts her to say, “‘I don’t remember asking you to show off, Miss Granger’” (Rowling, “Prisoner of Azkaban” 126). Later in the same book, he calls her an insufferable know-it-all when she is only trying to answer his questions. All of her classmates—who generally think she is a bit of a know-it-all—are furious with Snape, and Ron verbally defends her, earning himself detention. During a confrontation even later in the book, Snape yells at Hermione and calls her “a stupid girl” (Rowling, “Prisoner of Azkaban” 360), and a few chapters after that, he yells at her once again when she is only trying to state the truth. Even worse, though, is what happens in Goblet of Fire. Harry and Draco Malfoy get into an argument and pull their wands on each other; their spells ricochet off of each other, and Draco’s hits Hermione, causing her front teeth—which were already a tad large, and which Hermione was already self-conscious about—to grow at an exceedingly fast rate. Snape comes across the students and when the damage done to Hermione is pointed out, the following happens:

Snape looked coldly at Hermione, then said, “I see no difference.”

Hermione let out a whimper; her eyes filled with tears, she turned on her heel and ran, ran all the way up the corridor and out of sight. (Rowling, “Goblet of Fire” 300)

No authority figure should ever be permitted to get away with saying something so rude to a young student. Adults should not pick on children and teenagers for anything, whether it be physical appearance or for behavior in the classroom.

When we justify the actions of characters like Severus Snape, we are telling people that it is okay to be abusive and mean just because one is “in love.” We are reinforcing toxic masculinity by saying it is okay to obsess about a woman even when she says she does not want to be friends anymore. One sacrifice does not erase all the bad things Snape did in his life. Snape never seemed apologetic for abusing children, and too many characters—Dumbledore included—let him get away with his obsession with Lily. He should not be revered as one of the heroes of the Harry Potter series; instead, attention should be given to characters like Rubeus Hagrid, Arthur and Molly Weasley, and Minerva McGonagall—characters who never abused children or used their “love” to justify their actions.

The above text is an excerpt from my 13-page essay on Severus Snape. If you'd like to read more of my arguments, I've made it available as a Google Doc.