A picture (or lack of) speaks a thousand words. 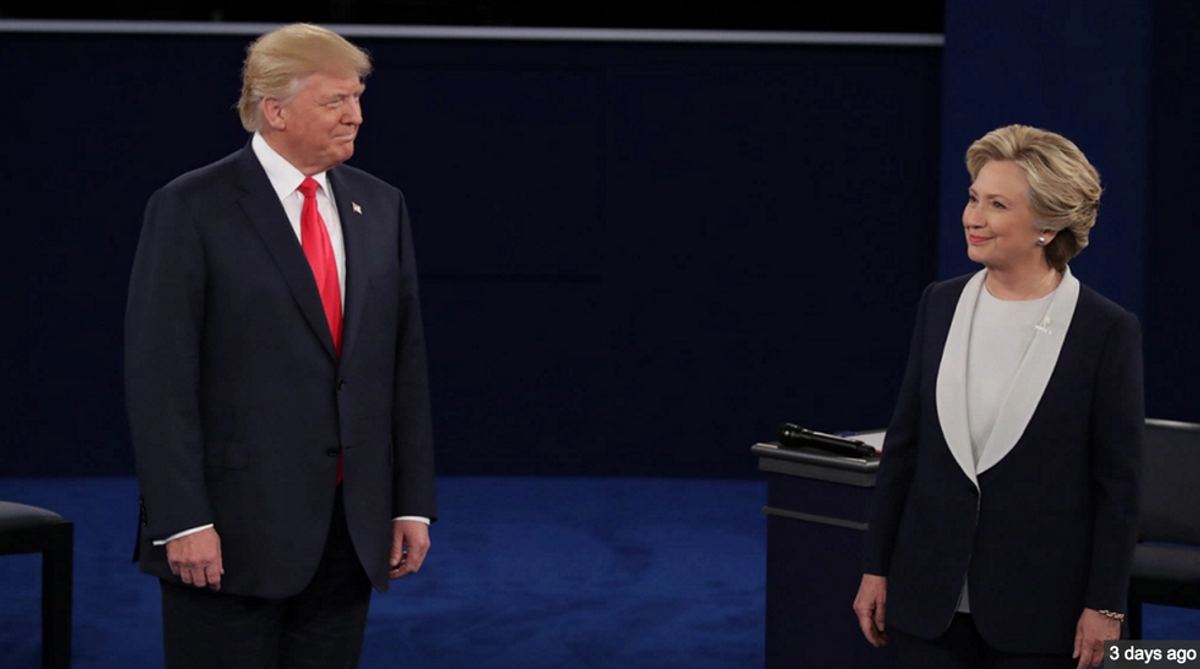 On Monday, October 10, 2016, 66.5 million people watched the U.S. Presidential Debate between Donald Trump and Hillary Clinton. Within the first 15 seconds of watching the debate, I knew that it would not matter how well either candidate would perform in the next 90 minutes – both of them proved to me that neither is qualified to be my president. After being introduced and entering the stage, Donald Trump and Hillary Clinton did not reach out to shake each other’s hands.

Although this may seem minor (shaking hands is a common, familiar gesture that we, Americans, do not think of normally when we do it), it impacted my opinions on each candidate tremendously. Shaking hands is a sign of respect to the person we are encountering and establishes trust between one another. Donald Trump and Hillary Clinton walked on stage and flat out did not shake hands with each other. Take a look:


Many people may say that I am over exaggerating when I say that this small, 5 second gesture, or lack-there-of, has impacted me and my opinion on these candidates so much, however to me, this shows that these candidates and their campaigns are no longer about us, they are no longer about American values, rather they are about competition. This election is now a competition between “Him” and “Her” that is based off of hatred, their egos, and their self-image.

16 months ago, these candidates announced that they were running for office. Although this election process has turned into something much more comical (and some may say vicious), these campaigns were rooted in prosperity and hope for the American people. Listed below are the campaign slogans and excerpts from their “running for president” announcements:

This ideals are great and the excerpts from each candidate’s announcement speeches exemplify American ideals and how our country should proceed in the future. However, where did it all of it go? Donald – how can you bring back the American dream, and Hillary – how can we be at our best, picking each other up, when you both can not even respect your running mate?

Now, why does a lack of a handshake at the beginning of a debate affect how I perceived the rest of the debate? Some may argue that they simply forgot, and others will argue that they shook hands at the end, so it doesn’t matter. However, when you re-watch the video and look at both of them, they blatantly walked out on stage, stared at each other, said “hello”, and then proceeded to look at the camera. With all discuss of the debate and the issues mentioned aside, and without my opinion on who won or who is better suited to be president – the fact remains that not extending their hands to greet one another showed me a lack of respect for one another. If you don’t have respect, what even is the point of their campaigns in the first place?

Shaking hands a simple gesture that we do without even thinking of sometimes, which shows to me that they deliberately chose to not extend their hands. They purposely did not feel it was necessary to greet each other. In fact, this article is not even about solely the lack of hand shake. This moment has been anticipated and expected throughout both campaigns and especially over the last few months – nastier headlines, brutal comments, as well as Twitter fights. Although all presidential candidates are like this when it comes down to the final months of the election, we can all agree that it is evident that these candidates are not normal – Donald Trump and Hillary Clinton hate each other.

This election has gone above the issues and the American people, and is now between two power-hungry people who want the title of President. The second paragraph of the United States Declaration of Independence states: “We hold these truths to be self-evident, that all men are created equal.” America is a country founded on equality, which means treating each other as equals, and that no one person is greater than the other. If you trace back many of the issues in our country, for instance, immigration, gender equality, the Black Lives Matter movement, etc., many of these can be fixed, and can ONLY be fixed when we, the American people, as well as the leaders we elect to change and enforce our laws, look at our country as people. This means removing the label of “Mexican, Muslim, gay, woman, black” and treating each other as “American”. This begins with respect. Of course, the issues occurring in our country are much more severe and important than a simple hand shake, however, this is where it begins: if the leaders we are deciding on can’t respect each other, how can they respect us?

The last question of the first presidential debate asked the candidates if they were still going to support whomever the American people elect as president even if they lose. Both candidates have said that they will support whomever is elected, however I think we can all agree that this is not the case and that neither response was truly genuine. If we truly want to “make America great again”, and if we want to be “stronger together”, it is necessary that we go back to the fundamental lessons of respect and equality that our country was founded on. There is hope for the future of our country, and it begins with implementing respect.