Now that the show is ending, I think it's time to reflect on Scott's best quotes. 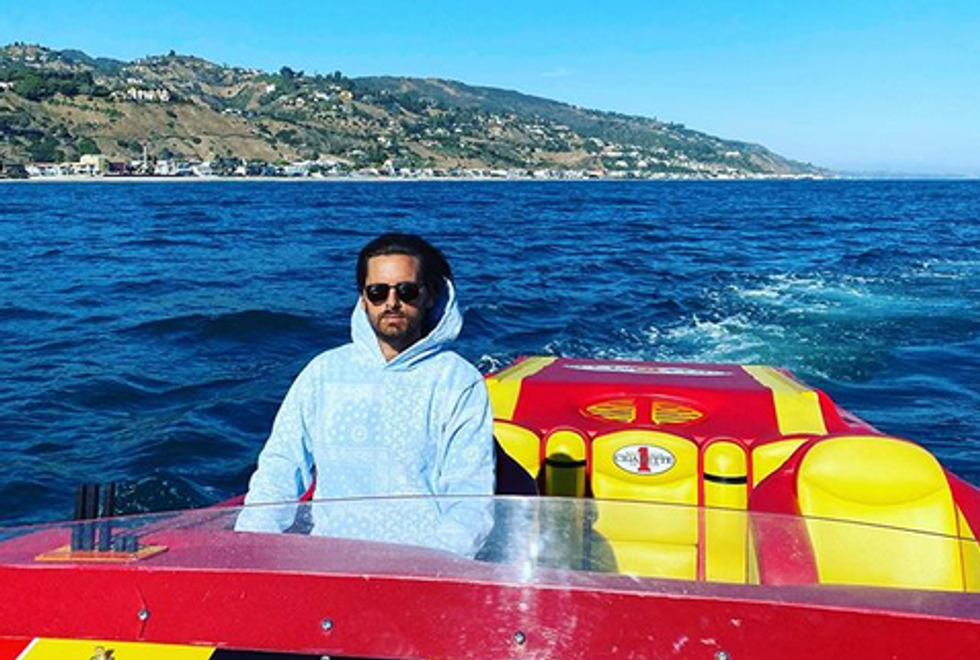 Recently, Kim Kardashian West announced that her show with her family, "Keeping Up With the Kardashians," is coming to an end after 14 years and 20 seasons of being on the air and I would like to say that I so called that reality shows would be coming to and end after this year and moving forward.

I could speak about how I'm upset about not being able to enjoy my favorite Kardashian sister, Kourtney, on TV anymore, but I feel that it's necessary to talk about the TRUE star of "KUWTK."

The one and only, Lord Scott Disick.

"KUWTK" die-hards (or casual watchers) have followed Scott's life from the very beginning when he and Kourtney first started dating up until the very end, which will be the final season airing in 2021.

We've seen Scott at his lowest points and at his highest points. Scott is an absolute gem to society and I have to just share some of these quotes that have honestly played a role in how I am today because if there are two things people know about Scott, it's his confidence and humor.

1. “If you guys lose your butts, we may all lose our money.”

2. “Seems like everyone enjoys me being here, but then again, who wouldn't?”

4. “Most people probably think I'm completely unemployed and I just walk around, and a camera crew follows me.”

Scott has his foot in several business ventures and his own brand, Talentless.

5. “I don't mind being portrayed as the villain on TV, but nobody knows the real me. I'm a great guy. You could say I'm a role model. I'm the American dream!”

6. “I love Kim, but she's like the most boring person ever.”

Oh, the irony of this one.

7. “Thank God, you wouldn’t have been able to afford it.”

8. “I don’t have to be walking around like some peasant. I’m royalty!”

9. “I didn't buy the piano to play it, I bought it because it looks nice.”

This is for comical purposes.

12. “I'd never thought that I would be in a family that has more people than a small country.”

13. “You know I’ve realized that I'm probably just perfect, and it's everybody else around me that’s got issues.”

The Lord's top and most retweeted quote of all time that will live on forever.

As the new year begins, many of us will be setting goals and resolutions for ourselves.

Your Coffee Order Says A Lot About Your Personality, And It Shows

Surprisingly, your coffee order can tell a person a lot about your personality and lifestyle! Find your order, or your BFF's, and see the vibes you give off to others!

What fresh hell is this?

From the current COVID-19 pandemic the globe is fighting to those pesky murder hornets, and fighting systemic racism, 2020 was not the year anyone anticipated. Despite these dark times, there is light at the end of the tunnel. During these unknown times of what's next to come, many people used interesting ways to cope with the sadness and grief they have experienced in the year 2020. As they say, laughter is the way to achieve happiness.

2020 Might Have Been The Worst Year Of All-Time—But Somehow, It Was Just What I Needed

I Met My Boyfriend On A Dating App, And I Don't Feel Ashamed At All

Yes, it's true. You can really meet the love of your life on a dating app, and I know that because I did almost four years ago.

Several movies and shows that will make you look forward to a new year.

The new year is almost here, which means that we can finally say goodbye to the year 2020! With a pandemic, quarantine, and several other events during 2020, having the year finally come to an end feels like a much-needed relief for almost anyone!

If you're having doubts that this year won't be better, all of the upcoming movies coming to Disney+ will likely change your mind. Disney released news that they will be releasing tons of different new movies this coming year, especially for Marvel.

3 Things Everyone Should Be Saying A Little More Often

No one can say these things enough.

Everyone assumes that those around them know how they are feeling and what they are thinking, but that's not always the case. There are songs that say this and people say this over and over, but no one ever really listens. As people age, they start to realize how true it is to say things more often but also know when to hold back. Some things you can't say enough, but most don't say it at all.

The Top 10 Christmas Movies To Watch This, And Every, Holiday Season

Notice how Elf is definitely not on this list.

Now that the semester is officially over, we're able to actually sit back and enjoy the holidays for a bit. For my family, that means cozying up with a dangerous amount of cookies and hot cocoa in our living room and turning on the projector to watch nothing but Christmas movies every night.

Personally, I am of the belief that every movie can be a Christmas movie if you try hard enough, so from one movie loving family to another, here are the top ten Christmas movies to watch this season.