Sandberg Forgot About The Junction of Race, Class, Gender and Sexual Orientation.

Sandberg Forgot About The Junction of Race, Class, Gender and Sexual Orientation.

While probably not intentional, there is more to not being able to "Lean in" than just gender. The institutionalized discrimination against a whole spectrum of "otherness" including race, class, and sexual orientation briefly explained. 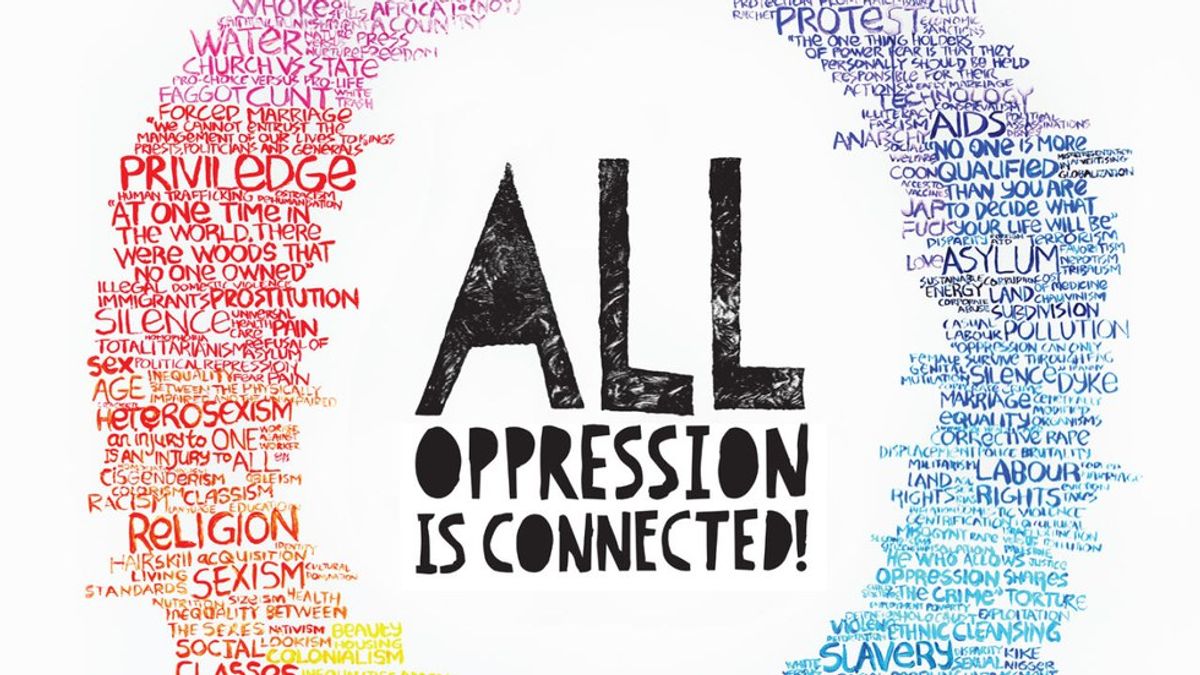 Sheryl Sandberg, the admirable COO of Facebook participated in a TedTalk informing women about how to advance their careers and overcome the blatant sexism that plagues our social institutions. Women are not making it to the top of any profession due to the still existing male dominated world that we live in. For instance, while there are 190 heads of state, only 9 are women (in 2008). She mentions the socially instituted malaise that working women have to go through and how ⅓ of married women in the workplace have children for every ⅔ of family men. Women shouldn’t be afraid to be part of the conversation. Sheryl questions the reason behind women's lack of presence at big corporate meetings and instead sitting at the table, they remain isolated to the side of the room. Women, she says, systematically underestimate their own abilities. And as men attribute success to themselves, women attribute it to outside factors like they were helped by someone, or they got lucky, or they worked really hard etc… She goes on by saying that no one, not even an extremely hard working woman will get that promotion or that corner office is she doesn’t think that she deserves her own success or worse yet, doesn’t understand her own success. Furthermore, Sandberg discusses how success and likability is positively correlated for men, but negatively correlated for women, which only proves her point that inequality is rooted in our social institutions.

Sandberg does a great job by mentioning how in today’s world, we are constantly “associating women with the private world of family and men with the public sphere of work” (254). Her argument is easily supported by Anderson and Collin’s example in The Structure of Social Institutions where normal families are seen as the one where the mother stays at home and has children and the deviant families include a working mother. Being a working women basically means that sometimes you have to choose between having a family and being a career woman, while men can have it all. These systematic forms of inequality are built in the system and the very infrastructure of society, where our own identities, as Anderson and Collins put it, are shaped by these injustices.

While Sheryl does an impeccable job explaining the sexism plaguing the workplace, nowhere in her talk does she discuss the restrictions that come with race, sexual orientation, and class. According to sociologists Anderson and Collin, there is an undeniable intersectionality of women, race, sexual orientation and class. Assuming this wasn't done intentionally, her talk came off more as a call of support to elitist white feminism without factoring in major sociological implications working in junction to each other. Sandberg technically only talks about the women who have been presented the opportunity to advance in the workplace. Perhaps her talk wasn't intentionally separatist, but there definitely was a disconnect and a lack of understanding on her part concerning making it to the table and leaning in. It was never just about gender; it's also about the color of one's skin, one's ethnicity, one's sexual orientation and one's class.

The following are examples of discriminatory cases:

In March 2015, a Texas-based oil and gas drilling company agreed to settle for $12.26 million the EEOC's lawsuit alleging discrimination, harassment and retaliation against racial minorities nationwide. According to a complaint filed by the EEOC the same day as the proposed decree, Patterson-UTI had engaged in patterns or practices of hostile work environment harassment, disparate treatment discrimination and retaliation against Hispanic, Latino, Black, American Indian, Asian, Pacific Islander and other minority workers at its facilities in Colorado and other states.. EEOC v. Patterson-UTI Drilling Co.

Microsoft gets sued gets sued for gender discrimination:

Katie Moussouris, a former Microsoft employee, sues the company for gender discrimination against her and other female coworkers. All of her suits were met with minimal consequence. 76% of the company in 2015 was make, 88% making up the executive levels, majority of them white.

The House of Representative passes bill that allows discrimination against LGBT:

It is now law that the private government contractors can fire someone because of their innate sexual orientation because of it's affiliation with religious establishments. Noam Chomsky was right; profit over people is how the United States has decided to function. One step forward, two steps back.

Madison Franz
The Narrative
1116443
Photo by Brooke Cagle on Unsplash

Madison Franz
The Narrative
653808
Photo by Manny Moreno on Unsplash