The patron saint of music 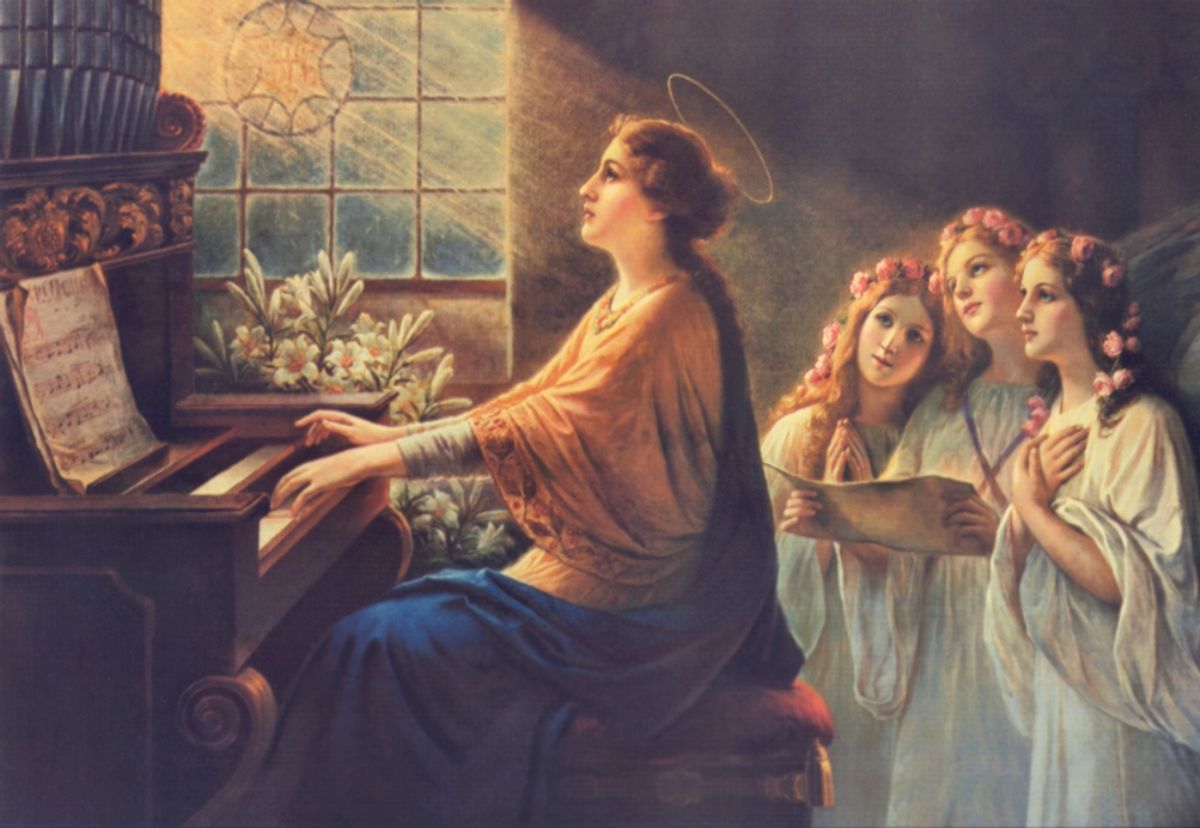 In the fourth century a Greek religious romance on the Loves of Cecilia and Valerian was written in glorification of virginal life with the purpose of taking the place of then-popular sensual romances.

Consequently, until better evidence is produced, we must conclude that St. Cecilia was not known or venerated in Rome until about the time when Pope Gelasius (496) introduced her name into his Sacramentary.

It is said that there was a church dedicated to St. Cecilia in Rome in the fifth century, in which Pope Symmachus held a council in 500.

The story of St. Cecilia is not without beauty or merit. She is said to have been quite close to God and prayed often:

In the city of Rome there was a virgin named Cecilia, who came from an extremely rich family and was given in marriage to a youth named Valerian. She wore sackcloth next to her skin, fasted, and invoked the saints, angels, and virgins, beseeching them to guard her virginity

During her wedding ceremony she was said to have sung in her heart to God and before the consummation of her nuptials, she told her husband she had taken a vow of virginity and had an angel protecting her. Valerian asked to see the angel as proof, and Cecilia told him he would have eyes to see once he traveled to the third milestone on the Via Appia (Appian Way) and was baptized by Pope Urbanus.

Following his baptism, Valerian returned to his wife and found an angel at her side. The angel then crowned Cecilia with a chaplet of rose and lily and when Valerian's brother, Tibertius, heard of the angel and his brother's baptism, he also was baptized and together the brothers dedicated their lives to burying the saints who were murdered each day by the prefect of the city, Turcius Almachius.

Both brothers were eventually arrested and brought before the prefect where they were executed after they refused to offer a sacrifice to the gods.

As her husband and brother-in-law buried the dead, St. Cecilia spent her time preaching and in her lifetime was able to convert over four hundred people, most of whom were baptized by Pope Urban.

Cecilia was later arrested and condemned to be suffocated in the baths. She was shut in for one night and one day, as fires were heaped up and stoked to a terrifying heat - but Cecilia did not even sweat.

When Almachius heard this, he sent an executioner to cut off her head in the baths.

The executioner struck her three times but was unable to decapitate her so he left her bleeding and she lived for three days. Crowds came to her and collected her blood while she preached to them or prayed. On the third day she died and was buried by Pope Urban and his deacons.

If you want more information, go to http://www.catholic.org/saints/saint.php?saint_id=....