Riots Aren't Always 'The Language Of The Unheard'
Odyssey
CurrentlySwoonLifestyleHealth & WellnessStudent LifeContent InspirationEntertainmentPolitics and ActivismSportsAdulting
About usAdvertiseTermsPrivacyDMCAContact us
® 2023 ODYSSEY
Welcome back
Sign in to comment to your favorite stories, participate in your community and interact with your friends
or
LOG IN WITH FACEBOOK
No account? Create one
Start writing a post
Politics and Activism

Riots Aren't Always 'The Language Of The Unheard'

The misuse of the words of Martin Luther King Jr. 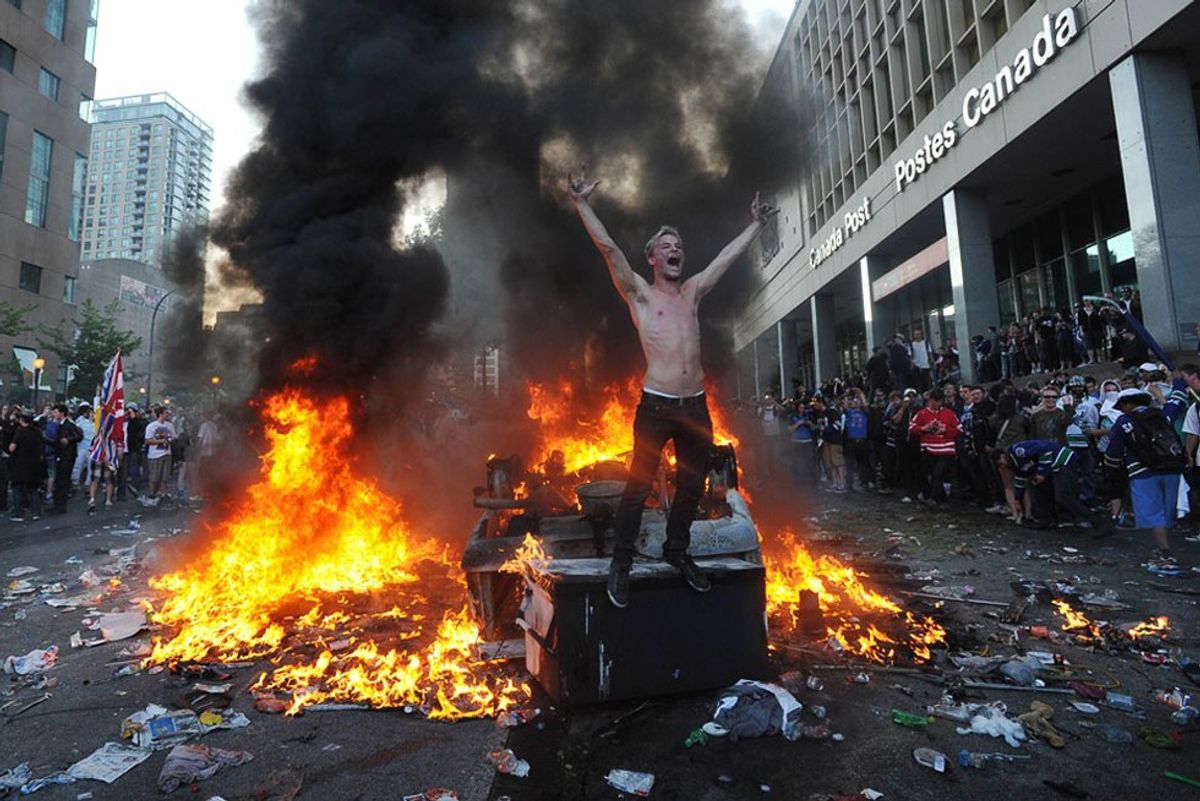 February is Black History month, and as expected, many famous quotes and conversations about famous figures in black history are being swapped around on social media. A certain quote by Martin Luther King, Jr. however, has begun being shared a lot more in recent years with the rise of the Black Lives Matter movement. You'll see it in one form or another in image "memes" saying this: "A riot is the language of the unheard."

This quote started being shared around the time of the Baltimore Riots. This was often in direct response to criticism that Martin Luther King Jr. would not advocate violence or destruction of property as a protest tactic. This quote often would be used to show that Martin Luther King Jr. was more radical than popularly portrayed by "White America" and to justify that rioting was a reasonable response. In pointing out perceived media bias, people would also share news reports of white people rioting that were comparatively less sensational in their reporting, thus revealing a double standard between white rioting and black rioting.

"Now I wanted to say something about the fact that we have lived over these last two or three summers with agony and we have seen our cities going up in flames. And I would be the first to say that I am still committed to militant, powerful, massive, non­-violence as the most potent weapon in grappling with the problem from a direct action point of view. I'm absolutely convinced that a riot merely intensifies the fears of the white community while relieving the guilt. And I feel that we must always work with an effective, powerful weapon and method that brings about tangible results. But it is not enough for me to stand before you tonight and condemn riots. It would be morally irresponsible for me to do that without, at the same time, condemning the contingent, intolerable conditions that exist in our society. These conditions are the things that cause individuals to feel that they have no other alternative than to engage in violent rebellions to get attention. And I must say tonight that a riot is the language of the unheard. And what is it America has failed to hear? It has failed to hear that the plight of the negro poor has worsened over the last twelve or fifteen years. It has failed to hear that the promises of freedom and justice have not been met. And it has failed to hear that large segments of white society are more concerned about tranquility and the status quo than about justice and humanity."

If it's not clear that presenting the quote stripped from its context removes the original intent, I will spell it out more explicitly. Martin Luther King Jr. did not think that riots were the way forward or even remotely helpful. In fact, he saw them as a hindrance to progress. He is saying that rioting hurts the cause, and in the midst of the Jim Crow era, these riots would break out because the injustice of Jim Crow era laws and institutional racism felt largely unheard. Martin Luther King Jr. confirmed these views further in an interview in 1966.

Some would say that's exactly the point, that all of these race issues are "unheard" even in today's modern society and that is why black communities still so often break out on riots. This argument forgets that the America of 2017 is not the same America during the Jim Crow era. This is an important distinction. While racism does indeed still exist in the minds of individuals, there are no systems in place that explicitly discriminate based on race here in America as there were during the Jim Crow era. It is argued that the systems may not be explicitly discriminatory, but instead, they are implicitly so. While I could go into detail and dismantle many of the common arguments, such as the idea that my "white privilege" prevents me from understanding this issue, I will instead simply say that I do not find most of these arguments convincing or valid.

Another issue with the idea that all riots are simply the language of the unheard is the increasing number of riots that have been started on what turned out to be false pretenses, driven by social media rumor, paranoia, and/or outright lies, such as in Ferguson. In a sense, it was because everyone was so well "heard" that the rioting began. I have written previously about the conspiratorial thinking that is a contributing factor to some of this hysteria. We have made a lot of progress in our society. Let's not start moving backward in our thinking and begin justifying violence as a valid strategy for social change. As for me, I will continue celebrating Black History month by honoring the real sentiment of Martin Luther King Jr, which was his commitment to "militant, powerful, massive non-violence" to achieve his goals.