A Response to Jacques Tourneur's Film "Out of the Past"
Odyssey
CurrentlySwoonLifestyleHealth & WellnessStudent LifeContent InspirationEntertainmentPolitics and ActivismSportsAdulting
About usAdvertiseTermsPrivacyDMCAContact us
® 2023 ODYSSEY
Welcome back
Sign in to comment to your favorite stories, participate in your community and interact with your friends
or
LOG IN WITH FACEBOOK
No account? Create one
Start writing a post
Entertainment

A Response to Jacques Tourneur's Film "Out of the Past"

Can We Ever Escape Our Past? 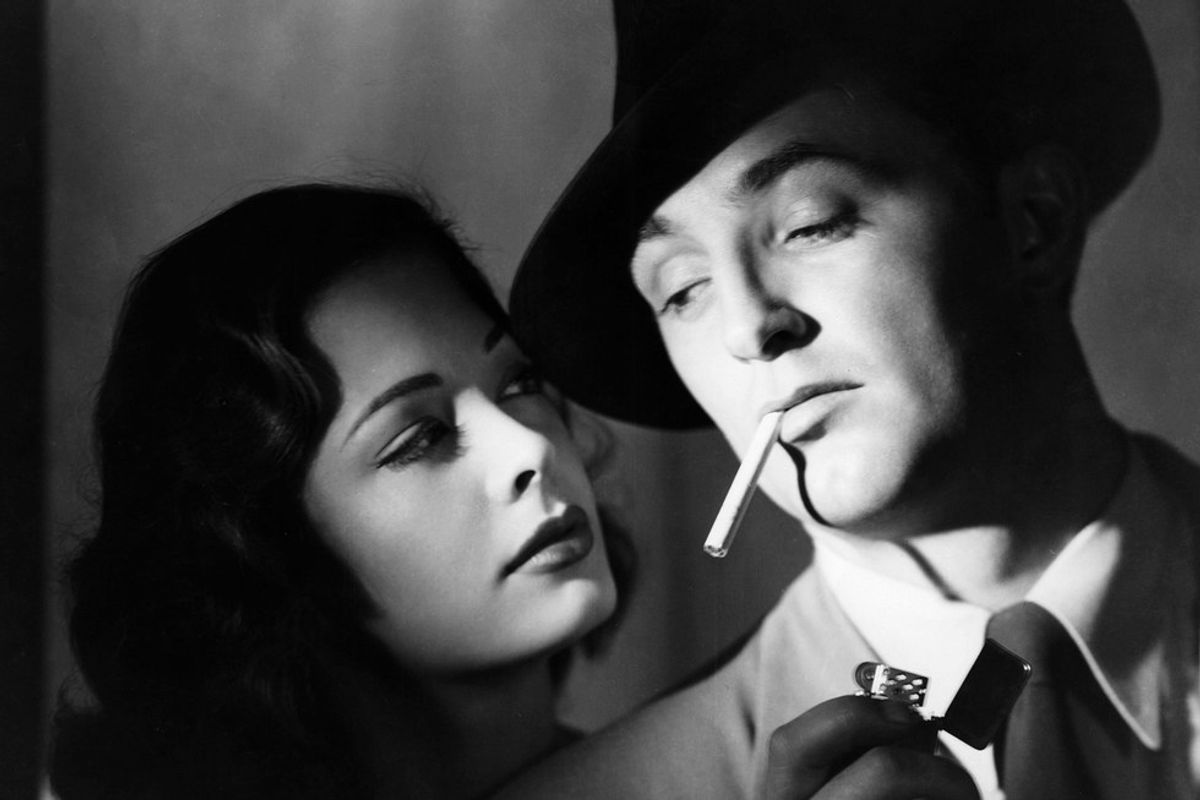 Jacques Tourneur's 1947 film, Out of the Past is definitely a film of firsts. The first difference I saw compared to the other noir films is that is displays expansive scenes of the great outdoors and mountainous terrains of California, Mexico, and Nevada. Several of the scenes are shot outside with an immaculate nature backdrop. Whether it is a beach shot of Kathie and Jeff playing in the sand, or fishing scenes in the mountains, the characters are placed in environments that move the story outside their natural environments. In the beginning of the film, we see Jeff and Ann enjoying a sunny day by a lake, consumed in the wilderness surrounding them. In this moment, Jeff is not stuck inside his past; he is free. As soon as Joe pays him a visit, Jeff is brought right back into the thick of it all. He comes back into the toxic relationships that take place inside mansions, hotel rooms, and cabins. There is a vast difference between the action that takes place inside and outside. Jeff and Kathie meet a few times on the beach, which is one of the few scenes where we see them outside together. Most of their scenes are them at her place, inside a café, a cabin, Whit’s house, inside a telephone booth, etc.

Another “first” was the large amount of travel and diverse people that are woven into the film. We hear people speaking Spanish and French when Jeff goes to find Kathie in Acapulco. This is also the first film where we see African Americans being presented. The Spanish guide comes in and asks them if they would like him to be their guide. I believe Jeff speaks Spanish briefly at one point of the film too. Jacques Tourneur has created a world larger than the characters. They are put into new environments which feeds into the excitement and attractiveness that both Kathie and Jeff display. There relationship is perhaps heightened due to the romantic Spanish cafés they meet at, or running in the rain to Kathie’s place. This was another part of the film where I felt it differed from the other films. Kathie invites Jeff back to her place, which is something we have yet to see in film noir.

Kathie is the epitome of the femme fatale. She travels, is independent, seductive, witty, and skillfully crafts her appearance. She is not innocent, and while most men know this, including Jeff, Joe, and Whit, her beauty and mannerisms put them in a trance. She is dressed all in white like an angel when Jeff first sees her. As the film goes on her attire becomes darker, more elaborate and ostentatious to the point where she is wearing a glorious fur coat with her hair done up. Her innocence darkens, which is apparent in her wardrobe. The last scene after she shoots Whit, she is wearing a very modest outfit, with her hair unexposed, almost nun like in appearance. Her disguise can't fool anyone at this point; we all know too much. She has her act down to a tee, however, she hides her craft behind masked innocence. Lighting changes as the film continues on. At first she is captured in light from the moonlight or headlights. In the scene where she shoots Fisher, she is captured in half lightness and half darkness. When Jeff asks her about the money and she leans in asking him if he can believe her, he loses his mental focus as her lips near his.

Comparing her to Ann is almost like night and day. Where Kathie is sophisticated and seductive, Ann is simple and sincere. Ann never truly gives up on Jeff; her innocence pushes her to her heartbreak. Both are pretty, however, Kathie is a movie star, and Ann is a small town kind of girl. Even comparing names, Kathie Moffat and Ann Miller, tells us something. Ann is always presented in light and wears plain clothes. Ann believes in people, a quality that is a curse and a blessing at the same time. Kathie is a woman who will never embody the true gentleness and poise that Ann exhibits. Ann exudes beauty from the inside, while Kathie will only ever be beautiful on the outside. Whit asks her at the end of the film, “You’re running the show now?” The bitter truth is that Kathie was always running the show, but she could only do it for so long until it consumed her as well.

Nicole Marie Nigro
Individual Creator
9023
c1.staticflickr.com
Where to start...... Let me start with the cliche that life throws us curveballs and what we do with it is what counts.