If You Remember 'Shazaam,' The Movie That Doesn't Exist, You Aren't Alone
Odyssey
CurrentlySwoonLifestyleHealth & WellnessStudent LifeContent InspirationEntertainmentPolitics and ActivismSportsAdulting
About usAdvertiseTermsPrivacyDMCAContact us
® 2023 ODYSSEY
Welcome back
Sign in to comment to your favorite stories, participate in your community and interact with your friends
or
LOG IN WITH FACEBOOK
No account? Create one
Start writing a post
Entertainment

If You Remember 'Shazaam,' The Movie That Doesn't Exist, You Aren't Alone 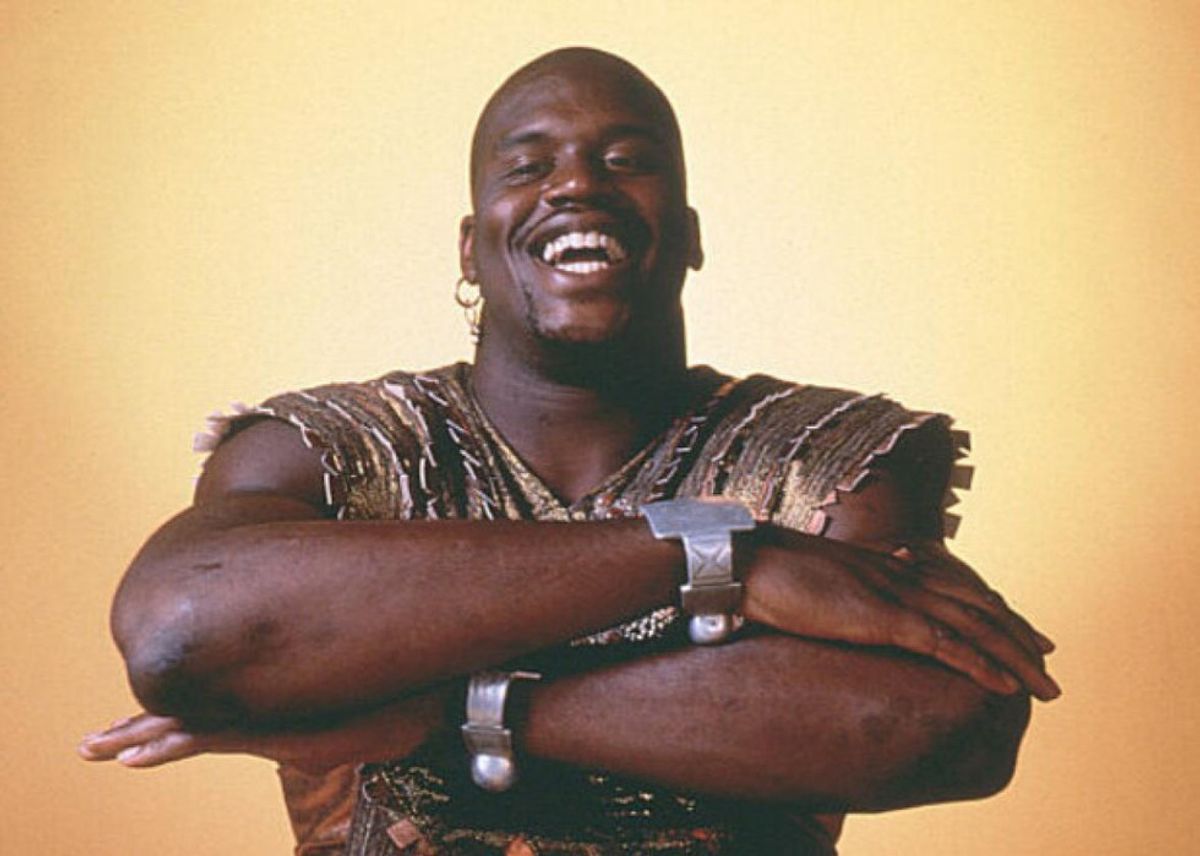 Anyone who has ever misplaced their glasses, even though they know they put them on the kitchen table (psst...they're on your head), knows that memory is unreliable.

Misremembering something is by no means unheard of or uncommon...but what if it were not just you who misremembered it? What if a whole bunch of people misremembered the same exact thing as you, even if all evidence says otherwise?

If you were a kid or teenager growing up in the 90s, you might remember a movie called 'Shazaam,' with popular television comedian Sinbad playing the principle role as a genie. As the plot goes, a pre-teen boy and his younger sister find a genie in a lamp and decide to use their three wishes to restore love to their single father's life. It is a comedic tale, involving instances of tomfoolery, such as when the children use some wishes for domestic activities, often failing comically. The culmination of the movie takes place at a pool party related to the father's work in which the children successfully use their final wish to make their father happy. What a marvelously cheesy ending!

Some of you reading this might be nodding your head, recalling having watched this movie, and you are not alone. There is a large community of people who can remember quite vividly watching it with their friends and family. So what seems to be the problem? Well, the movie 'Shazaam' does not exist—and it never has.

The rumor of its existence has gained so much traction that even Sinbad himself had to set the record straight on Twitter:

You can scramble the Internet and old video stores nationwide, but you will not find any proof that there ever was a movie named 'Shazaam' with Sinbad playing a genie. If you are at all dismayed by this fact, you are not the only one.

An ever-growing number of confused 90's kids have flocked to the Internet to adamantly insist that there was, indeed, a movie called 'Shazam,' and Sinbad was definitely in it. Just peruse the countless threads about it on the website Reddit and you will find that there are hundreds of people who can provide their own accounts of having seen the movie. Most people agree that the movie was released in 1994 and concur with the supposed movie plot described above.

How is it that so many different people can all recall specific details of a movie that does not exist? The 'Shazaam' case has come to be known as a famous example of the "Mandela Effect," a term coined by author and researcher of the paranormal, Fiona Broome, creator of mandelaeffect.com. She defines it, simply, as “a collective misremembering of a fact or event."

The name “Mandela Effect" comes from the most famous case of the Mandela Effect, involving the shocking amount of people who believe that former South African President Nelson Mandela died while in prison, when the truth holds that he was actually released in 1990 and died in 2013.

Another famous example of the Mandela Effect is the common misremembering of the Bible verse Isaiah 11:6. A large number of people, including many priests who were interviewed, swear that the verse reads, “The lion also shall dwell with the lamb." But, pull out your trusty Bible and you will see that the correct verse is, “The wolf also shall dwell with the lamb." This verse discrepancy makes many Christians uneasy because the protective image of a lion is replaced with the crafty and destructive image of a wolf. Some even believe that the verse change is a sign of the existence of the antichrist.

There is even scene in the 1941 movie 'Sergeant York' in which the character Gracie walks past an old man in a rocking chair reciting the Bible verse using the lion. This has many people firmly insisting that the correct version includes a lion, but that something in recent history has caused it to be changed.

Some examples of smaller instances of the Mandela Effect are the common misrememberings of the name of the classic animated TV show, “Berenstain Bears" (most people remember it as “Berenstein Bears"), the existence of a dash in the brand name “KitKat" (there has never been one), and other misspellings of logos.

Many conspirators believe that the Mandela Effect is the result of a jump between parallel universes, in which slightly different alternate realities exist. However, Snopes.com, a famous reference website dedicated to documenting and debunking urban legends, has offered some more logical explanations for instances of the Mandela Effect.

“A leading psychological theory holds that memory is constructive, not reproductive," Snopes says, “— i.e., the brain builds memories out of various bits and pieces of information on the fly as opposed to playing them back like a recording. Memories aren't pure. They can be distorted by any number of factors, including bias, association, imagination, and peer pressure."

For example, the common misconception that Nelson Mandela died in prison might be a case of a faulty connection between two isolated facts —(1) Nelson Mandela went to prison and (2) Nelson Mandela is dead. Or with the Berenstain Bears, it is quite rational to believe that people just assumed that the name was spelled “Berenstein" because that is a far more common spelling of the name.

So what about 'Shazaam'? A reasonable explanation is that people are simply mistaking it with the 1996 movie 'Kazaam,' in which Shaquille O'Neal plays a genie and appears to a teenage boy, who just so happens to have a single mother (similar to how the children in the alleged 'Shazaam' had a single father).

Additionally, other shows and movies at the time could further muddle people's memories. There was a movie called 'Legend of the Seven Seas' featuring a character named Sinbad the Sailor, and a Hannah Barbera cartoon called 'Shazzan' about the adventures of a genie and the two children—a teenaged boy and girl—who released him.

There was even a sketch in the wildly popular Nickelodeon show “All That" about a foreign exchange student who was dressed in genie-like garb. And who was the actor? You guessed it...Sinbad! It seems perfectly reasonable to assume that all of these similar media could easily mix together after a certain amount of time, causing misremembering that has been further perpetuated by all of the hype on the Internet.

Another explanation that can be layered on top is the idea of "memory conformity," which states that people can remember events that they were told about or that were described to them as if they had experienced those events themselves. In this way, many people may agree that they remember something that happened simply because someone else said it was so.

This may be a perfectly acceptable and scientifically logical explanation for this strange occurrence...but the plot thickens. When the theory was presented that the public was simply mistaking the movie 'Shazaam' for 'Kazaam' and other media, those who claimed to remember 'Shazaam' pushed back, vehemently claiming that they were well aware of Shaq's movie 'Kazaam' but were certain that 'Shazaam' was a separate movie that preceded it. One woman named Meredith who was interviewed on the subject claimed this:

“I remember thinking Shaq's 'Kazaam' was a rip-off or a revamp of a failed first run, like how the 1991 film 'Buffy the Vampire Slayer' bombed but the late '90s TV reboot was a sensation...I am one of several people who specifically never saw 'Kazaam' because it looked ridiculous to rip off 'Shazaam' just a few years after it had been released.

Perhaps most cryptically of all, there seems to have been a reference to 'Shazaam' on a TV show called 'A Different World' (1987-1993) in which the comedian Sinbad played Coach Walker Oates. In this scene (appearing in season 5 episode 13), the character Freddie is trying to hide a scarf she is making for her boyfriend Shazza Zulu–one with the initials “SZ" on it—from her friends; but, when they discover it and ask what “SZ" stands for, she responds that it “could be for someone who loves Shazaam."

So, do you think 'Shazaam' is real or an urban legend?
Report this Content
This article has not been reviewed by Odyssey HQ and solely reflects the ideas and opinions of the creator.