12 Women We Should Have Learned About In School
Odyssey

12 Women We Should Have Learned About In School

Reclaiming their rightful place in history. 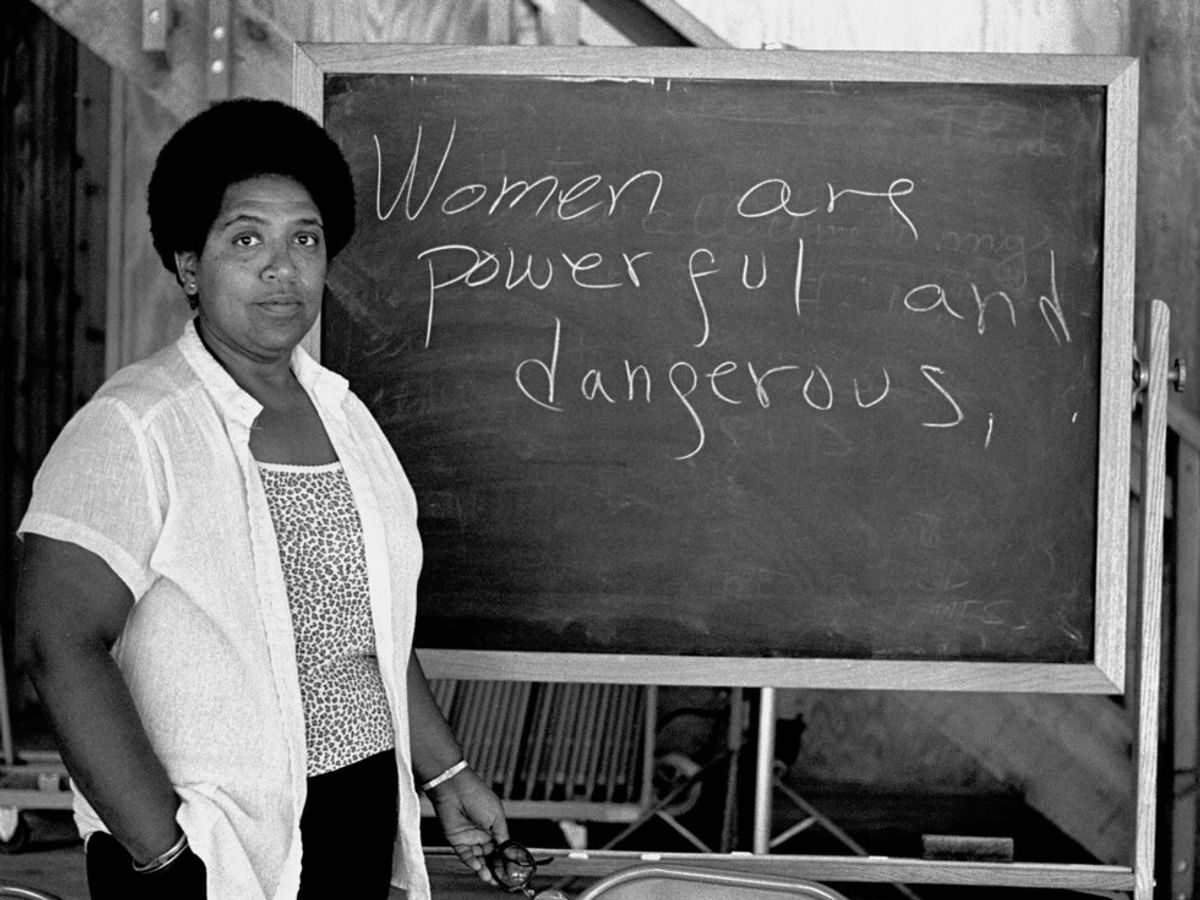 Even through deeply integrated and systematic oppression, women have shaped the course of history through tenacious contributions to all facets of science, the arts, and social change. Most of these women have gone underappreciated in our historical accounts and dialogue. I believe that it is high time to unearth those who have been neglected and celebrate them for their immense influence and heroism that have enriched our lives. To begin this lengthy quest, I present to you twelve women who we should already be exalting and learning about in our schools.

We have all learned about Paul Revere and his famous ride to alert militia that British troops were approaching. It is little discussed, however, that in the same month of April 1777, a sixteen year old girl named Sybil Ludington performed a similar action, except she rode 40 miles (more than twice as far as Revere), in a men’s saddle, carrying only a branch to ward off potential bandits. She was celebrated by her friends and family, and even recognized by George Washington upon her return. History books, however, neglect to mention the courageous young lady.

Elouise P. Cobell, also named Yellow Bird Woman, was the treasurer for the Blackfeet tribe and the founder of the first Native American bank. Furthermore, she initiated and was the lead plaintiff in the largest class action lawsuit against the U.S. government ever. Cobell grew up with eight brothers and sisters, in a home that did not have electricity or indoor plumbing. From an early age she fought for the rights of the Native people, and continued to do so until she lost her battle to cancer in 2011.

Nana Asma’u was a Muslim scholar, princess, poet, and teacher who lived in the area now known as Nigera. She was bright from a young age, and could recite the Quran, speak Arabic, the Fula language, Hausa and Tamacheq Tuareg. She became an acclaimed poet and author, writing about topics such as divine truth and women’s rights and importance in leadership positions. She also wrote eulogies which now serve as historical documents, giving insight into the political atmosphere of the time. As a teacher, she taught boys and girls together, and also instructed a large group of women to be teachers, thereby beginning a network of women educators that pass along the knowledge that she cultivated. These women have called themselves yan-taru, or “those who congregate together, the sisterhood”. Nana Asma’u’s life and works are an affidavit to women’s rights, specifically to pursue education and to be involved in community and social issues. Her tombstone is now a place of pilgrimage for Muslims.

Augusta Ada King-Noel, Countess of Lovelace was an English mathematician and writer, and the only legitimate child of famed poet Lord Byron. Byron and her mother were together only briefly, separating when Ada was only one month old. Ada’s most notable work was on Charles Babbage's early mechanical general-purpose computer, the Analytical Engine. Her notes on this work are regarded as the first algorithm intended to be carried out by a machine, thereby making her the first computer programmer.

Wangari Maathai was a Kenyan political and environmental activist who founded the Green Belt Movement. The Green Belt movement is an environmental non-government organization that focuses in environmental conservation, women’s rights, and planting trees. In 2004, she became the first African woman to be awarded the Nobel Peace Prize. An Honorary Councilor of the World Future Council, she also served as an elected member of Parliament, and as assistant minister for Environment and Natural Resources in the government of President Mwai Kibaki. Her ex-husband filed for divorce from her because he believed Wangari was "too strong-minded for a woman" and that he was "unable to control her". Damn straight. #BoyBye

Sylvia Rivera was a transgender and gay liberation activist, drag queen, and philanthropist. She was the cofounder of STAR (Street Transvestite Action Revolutionaries), a group that is devoted to helping homeless trans youth and trans women of color. She was also a founding member of both the Gay Liberation Front and the Gay Activists Alliance. Cast aside by disapproving relatives, Sylvia (born Ray Rivera) was on the streets at age eleven, and was funneled in to doing sex work to survive. Sylvia fought to give a voice to the voiceless, involving herself with the civil rights movement, the anti-war movement, and second-wave feminist movements as well as being a pillar for the LGBTQ community. She rioted at Stonewall, worked with the Young Lords (a Puerto Rican civil rights group) and the Black Panthers, and was active with the Metropolitan Community Church of New York, providing food for those in need. Activist Riki Wilchins once said, "In many ways, Sylvia was the Rosa Parks of the modern transgender movement, a term that was not even coined until two decades after Stonewall".

Ella Baker was a heroine of the civil rights movement, and a fighter for human rights. Though she worked alongside all of the big names of the movement, her fifty years of work was largely behind the scenes, as she was a seemingly private person. Nevertheless, she is regarded as the mother of the movement, because of her tenacious involvement movements aimed at freedom and equality. Ella is notable for a multitude of reasons, but what I find myself to love about her most, is her selfless leadership. Through her hard work, she was a critic of movements lead by professionalized, characterized, leadership, and was rather an advocate for grassroots revolution and radical democracy.

Émilie du Châtelet was a French mathematician, physicist, natural philosopher, and author. Her love affair with Voltaire has often overshadowed her achievements, but it should be noted that Emilie was a great thinker of her time, and was regarded as such by her peers. Her commentary on Isaac Newton’s work is still considered the standard to this day, and her publications on the ideas of energy, kinetic energy, and involvement in the vis a vis debate have kept her commentary steadfast in the science discussions today.

Born to the most powerful ruler of Central Asia, Khutulun was a fierce warrior who fought alongside her father in battle. Marco Polo and Rashid al-Din both wrote of her, Marco Polo saying that she could snatch a captive as easily as a hawk snatches a chicken. Khutulun challenged any potential suitor to a wrestling match if they wished to marry her, stipulating that they must forfeit their horses if they lost. She gained about 10,000 horses in the process.

Murasaki Shikibu was a Japanese novelist, poet, and lady in waiting, most famous for penning the renowned the Tale of Genji. Her work is important, as it cultivated a linguistic shift in Japanese from a largely unwritten language, to a written one. It is also to be noted that women of her time and of the area were traditionally excluded from achieving literacy, but Murasaki did that and then elevated the entire language.

Rosalind Franklin was a British chemist whose work made great strides in the understanding the molecular structures of coal, graphite, viruses, and DNA. Though some of her work was acknowledged during her life, her contributions to the DNA molecular study came largely posthumously. She and her family helped settle Jewish refugees in their home, and housed two children who had escaped Nazi Germany.

Anne Lister was a Yorkshire diarist, mountaineer, landowner, and traveler. She is regarded as the first modern lesbian, as she was open and outspoken in her sexuality, often writing about her romantic escapades in great detail. She wrote, in total, about a four million word diary, much of which was written in code and later deciphered. Anne is hailed as giving a true voice to a community that was stifled. Upon entering her diaries in to the United Nations Educational, Scientific and Cultural Organization Memory of the World Programme, the register citation labeled the works a “comprehensive and painfully honest account of lesbian life and reflections on her nature, however, which have made these diaries unique. They have shaped and continue to shape the direction of UK Gender Studies and Women’s History.”

Caitlin Marie Grimes
University of South Florida
10802
Beyond The States