Why Raves Are So Much More Than "Just Another Party"
Odyssey
CurrentlySwoonLifestyleHealth & WellnessStudent LifeContent InspirationEntertainmentPolitics and ActivismSportsAdulting
About usAdvertiseTermsPrivacyDMCAContact us
® 2023 ODYSSEY
Welcome back
Sign in to comment to your favorite stories, participate in your community and interact with your friends
or
LOG IN WITH FACEBOOK
No account? Create one
Start writing a post
Entertainment

Why Raves Are So Much More Than "Just Another Party"

To some it may just be another amazing party weekend, but to others it's life changing. 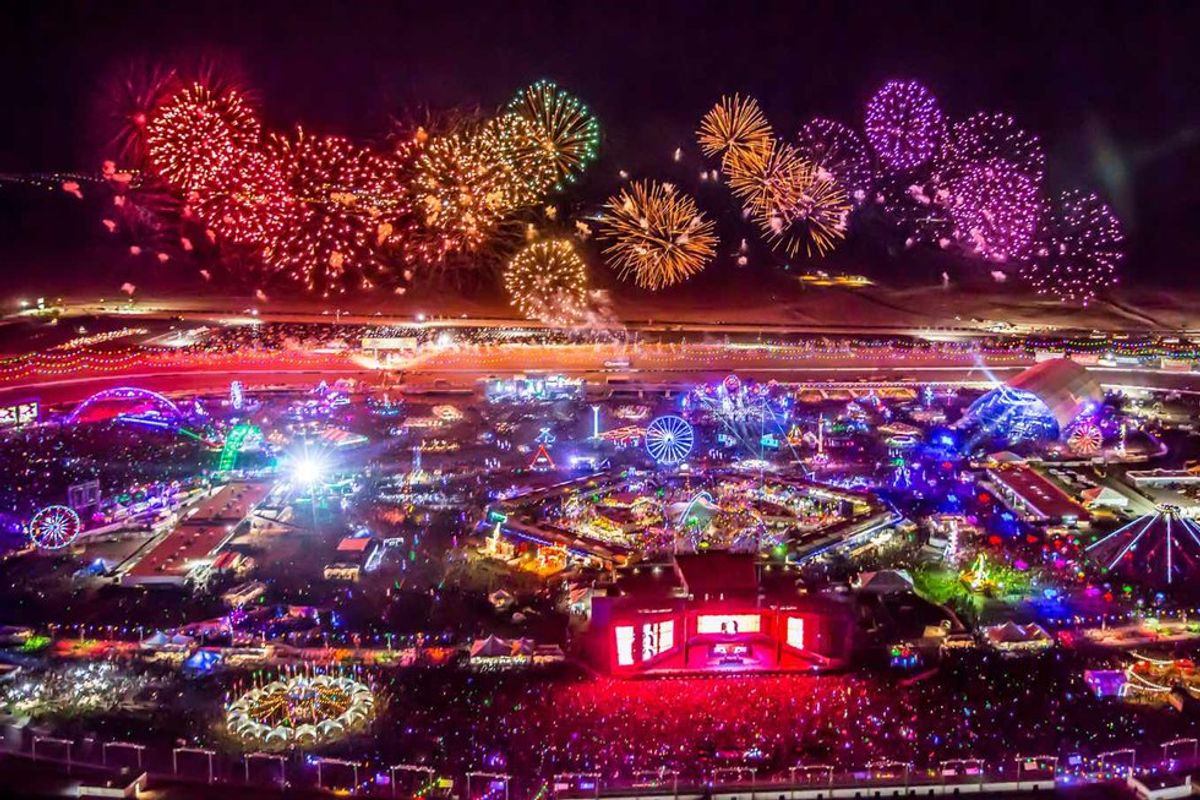 I've never been someone who was a huge raver. I loved going to music festivals and had been to several, but I had never been to anything really considered a "rave" until this past weekend when I attended Electric Daisy Carnival in Las Vegas, Nevada. A lot of my friends went to raves pretty often, I had just never been to something truly considered a rave until EDC. It was such an amazing experience. At some other music festivals that I've attended, everyone keeps to their own groups and sometimes people were just downright rude and disrespectful to each other. However, when attending this event, everyone was so kind, outgoing, accepting, and you got to know so many amazing people because everyone was so friendly.

On the very first night, my best friend and I met a really interesting guy named Diggy. He came up and started a conversation with us while we were taking a break in between artists. He didn't ask us the normal small talk questions of where you're from and where you go to school. Instead, he asked us what our dreams were, what we wanted to do with our lives, and what our passions were. Later on, after EDC, I asked him why he went to raves and his answer was, "Initially, it had been just due to friends who had gone prior to. I was just in it to spend time with friends. After having had my first one, I now go for the connections. The intimate relationships created between strangers!" After our conversation on that first night at EDC, I completely understand why Diggy and so many others feel this way about going to raves. It was so amazing to have such a real conversation with a complete stranger. He showed us his youtube channel and talked about how he wanted to change the world. This was a complete stranger who we had only met five minutes ago and there we were, discussing life and our views on the world. It was something that I'm sure that my best friend and I will remember for a while.

I began wondering what makes raves so special, what draws people to them, and what it means to people, so I reached out to Diggy and a few other people who I knew were passionate about raving. Their answers were more amazing than I ever could have imagined and it just made me want to go to more events like this.

I reached out to one girl who I've become close to this past year named Victoria who attends many raves. What she had to say I perfectly shows what some of these events mean to people. The biggest thing that stood out to me is how when asked what raves meant to her, she said, "In all honesty, it kind of changed my life. I knew I was always different from other people. Even my best friends, I just always felt like I was different from people. There was just something different about the way I thought compared to everyone else. In high school I was a more closed-off type of person, I came off cold and short with people. I don't think I was really happy with the person I was back then and raving kind of opened up that door for myself that really just allowed me to embrace myself and my individuality. There's something about the music that makes my problems feel so small. Like when I listen to a song, I can't explain how it makes me feel. It reminds me that there is so much more to life like happiness and good vibes. It reminds me that nothing else really matters other than that moment and being happy in that moment."

So many people think that raving is just overpaying for a DJ to press play on his laptop, but it is so much more than that. Not only are the artists so much more amazing than people give them credit for, but these events can have profound impacts on people's lives like it did for my friend.

I asked Diggy, after having met him that night at EDC, what made him love raves so much and he said that it was: "Being surrounded by other beings who have such intense energy and love for one another regardless of where they are from, skin color to country, makes me absolutely ecstatic and feel so vibrant!" One thing that I found to be amazing when attending EDC was the pure love and acceptance that everyone had for one another. The rave community talks a lot about PLUR, which stands for Peace, Love, Unity, and Respect. It is somewhat of a motto for all rave-goers. I asked him what this saying meant to him and his response was more than I ever could have imagined: "It means change to me. To be spreading peace, love, unity, and respect at such a grand level of raves just shows me it means change. To change the way people see strangers to change the way people think about kids who just go to party. It means to me a catalyst that can actually have the potential to change the perspective of upcoming generations."

Every person has a different definition of what PLUR means to them. When asking my friend, her response was just as amazing as his had been. She said, "PLUR means peace, love, unity, and respect. To me, that means just looking out for each other and loving each other. You know, take care of your neighbor because we're all the same. We're all people. Especially in the edm/rave scene, I get a sense of belonging. I feel at home. I feel like those are my people, like these are the ones who understand what this music means to me because they feel it too. That's the only way this scene will keep living on, is if people are nice and help each other. It honestly blows my mind that music has that power to bring so many people together. We're all so different, but united in a crowd were all the same. We're all there for the same reasons. Even the people who might be at their first rave, I'm just as nice to them because I want them to fall in love with it like I do. I want people to see in it what I see in it. It sucks that some people look down on ravers or think bad about them because I swear that they are the nicest people I've ever met. If everyone were like the people who I've met at festivals, this world would be a better place. No one is judgmental or full of hatred, it's just a bunch of nice people trying to have fun. That's the attitude that people need to have every day in this world. When I say I've never been this happy, I honestly mean it. Everyday I feel so happy and blessed to be alive, to feel this alive and free. Something about the music that makes me feel so alive. And I feel lucky and blessed to have such a strong mind that can see the beauty and creativity for something like this because I know so many people who cannot, and I feel sorry for them because they're truly missing out on something life changing." I don't think that I could have said it any better, these raves mean so much more to people than most understand. People see these events as an excuse to party or as a waste of money, but it means so much more than that to so many people. When everyone is at these events, they all come together as one big family. It's like my friend Victoria said, these events are her home and so, by default, that makes all the people attending like your family for the time when you are there.

Raves have gained somewhat of a bad reputation, but the truth is that it is something that unites so many people it and lets them freely express themselves without judgement. If everyone could see this, I think they would understand why hundreds of thousands of people attend these events every year. If you haven't been to an event like this before, I highly suggest going before passing judgement. If you have attended, then you already know all of this to be true.