Your Quick Summer Guide To Snakes

Red and yellow is a friend of... Wait, what is it again? 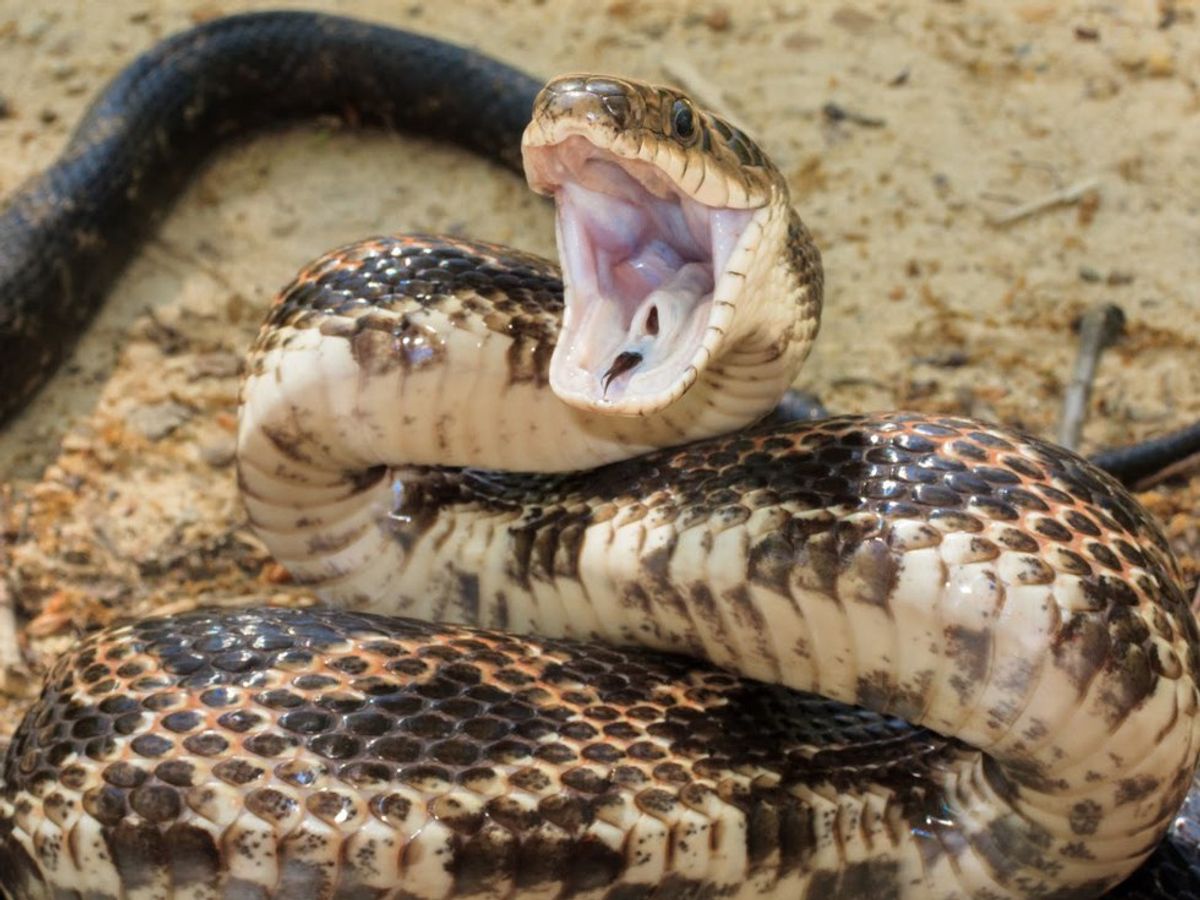 Snakes are all around us here in Georgia, even having the little-known claim to fame of hosting the most biodiverse number of snakes, totaling at 46 different types of species. Well, how do you know which ones you should really be scared of and which ones are better off left alone? Well only six out of the 46 are venomous, but the four on this list are the ones you most likely could come across. So here's a quick, handy guide for which snakes you should avoid, and what to do if you run into one of these critters:

The Ones to Avoid:

Lookout high and below with these bad boys. Cottonmouths are found typically near water features, such as lakes or swamps and known to swim underwater to capture their prey. That's not all, however; cottonmouths are also known to drop out of trees onto boats passing by underneath giving the unlucky passengers an unlucky and sinister surprise. Cottonmouths bites are to be avoided, and can be even fatal.

The copperhead is another snake that is not worth messing around with. They can be found almost anywhere in the great state of Georgia, and their bites more often than not are nonlethal to humans, but that doesn't mean it won't be painful for you. These critters can get pretty aggressive as well, so if you see them, it's best to clear out and leave them alone.

...Red and yellow kills a fellow. These are the snakes to watch out for when you're in the water, along with cottonmouths. Though they are not nearly as aggressive, their bite is going to hurt bad. There have been no deaths in the U.S., since anti-venom has used to treat bites, but that doesn't mean you should go provoking this serpent.

These are the bad boy, leather jacket wearin', top-of-the-food-chain, big older brother to all the snakes already mentioned above. This rattlesnake is the largest venomous snake in all of North America. Think about that for a second. Now the rattlesnake has a very distinct scale pattern, which has, you guessed it, diamonds on its back. On the bright side, however, these snakes avoid you like a plague, just like you should avoid it, because people typically only get bitten by them when they are trying to capture it, probably for a not-so-worth-it Instagram photo.

Well, now that we know what they look like, what should you do if you happen to come across one?

First and foremost, if you run into a snake, the chances are that it isn't venomous, and so you should probably just leave it alone. If you need a little help, one of the easiest things you can look at is the head of the snake. If it is in a heart, or diamond shape, then it belongs in the venomous viper family with other snakes, such as the copperhead and rattlesnake.

Regardless if it is venomous or not, chances are that it is more scared of you because it can't eat you. So back away slowly and let nature be nature.

If it for whatever reason bites you, don't fret! Only 3 to 5 people die each year out of about 10,000 snake bites.

Here's a list of things you think you should do, but actually are a bad idea.

1. Don't suck out the venom. It doesn't work, and under no circumstances are you going to gain anything by attempting to suck it out.

2. Don't panic. Although this is easier said than done, panicking will just make the situation more difficult for you and possibly whomever you are with, so even sitting down and taking a second to gather yourself would even be beneficial.

3. Don't use a tourniquet. Your boy scout friends have been dying since cub scouts to try this out in the real world, but don't let them. Using a tourniquet won't solve much because the venom in most cases won't travel too far across your veins, and you could even suffer from limb loss if it is left on too long and preventing fresh blood from helping out the wound.

So all in all, your best bet is just to call 911 and let emergency responders deal with your bite, should you get one. Be smart, and don't do anything to put yourself or the snake at risk, and enjoy the summer now that you're a little smarter than your friends when it comes to snakes.

Caitlin Marie Grimes
University of South Florida
10953
Beyond The States