My Queer Experience At A Catholic University
Odyssey

My Queer Experience At A Catholic University

The pros and cons of finding your identity in a Benedictine community. 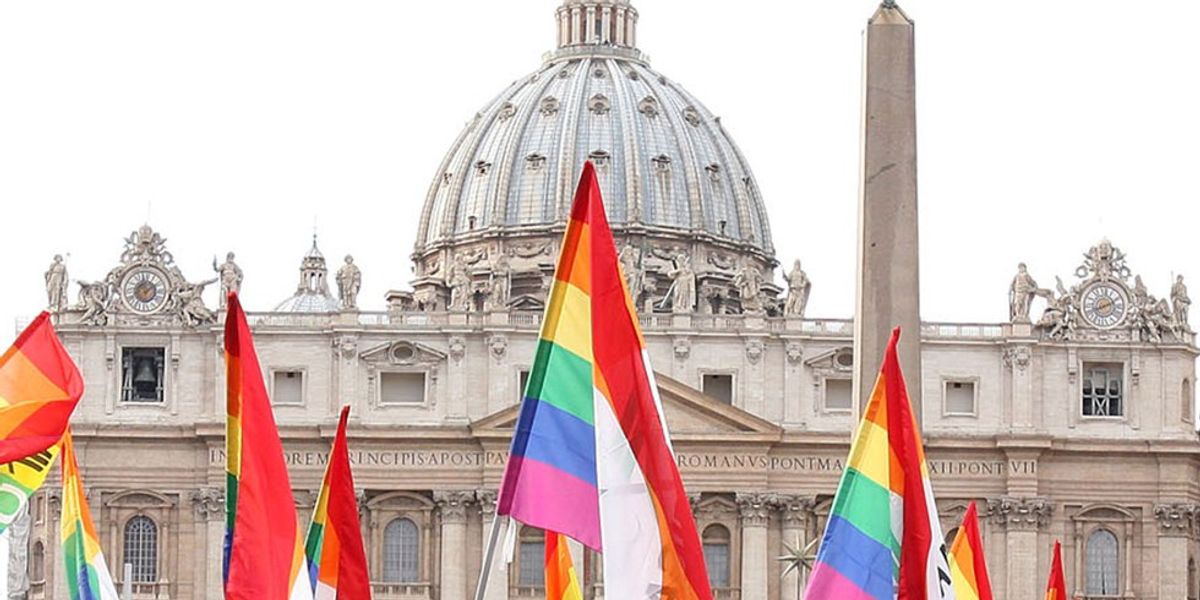 Being queer has always been such a huge part of my life. From the time I was a little girl I always advocated for others within the LGBTQA spectrum.

Now on the cusp of turning 24 years old, my advocacy for the community has only grown stronger. Growing up with a mother who identified within the community only opened my eyes to love and acceptance even more, and with that love and acceptance came the chance to meet so many amazing people that she considered her friends. I will never forget admiring the bonds that some these individuals shared. Whether it was over something so small as a softball team or their love for going out on a Saturday night to a gay bar; the fact of the matter was that they always had each other’s backs. And I craved a lifetime of friendships just like that.

When the shootings in Orlando occurred on June 12th, 2016, I found myself mourning the community in a way that left me aching for justice. Over the course of that day I received a string of text messages from some of my closest friends at school. Simple, ‘Hey, how are you holding up?’ texts, that created a shield of love around my heart that I was not expecting.

You see, these were the queer friends I had made at my Catholic university. Coming from such a small university that had a very small queer population, we were all we had. From that day on, something had triggered deep inside of me. My passion for justice and equal rights only burned brighter, and I knew I had to do something that would change the game for the LGBTQA community in my own backyard.

I often find myself getting asked what it is like being queer at a Catholic Benedictine university. I get asked if everyone hates us or if our struggles are as intense as one could imagine. There is never really right or wrong response; I say this because every queer experience will always be different.

My queer experience is so much different compared to another individual who might not be as open about their own struggles. The truth is, being queer at a Catholic university is an experience in itself. And today I’ve decided to finally break the chains on the silence that has been brewing inside of me for quite some time.

First things first; not all Catholics hate the gays (I know, who would have thought?).

Sure, there are a nice handful of people I have met that maybe aren't so in love with the idea that the LGBTQ community is just as deserving of a normal happy life as the next straight couple. However, I have also met some of the most amazing God loving individuals that have to disagree. The thing about Saint Martin's that can be both a pro and a con, is that it is such a small community. Being in such a small community gives us the opportunity for intimate discussions on struggles within the LGBTQ community, and what that could mean for all of us, no matter what our orientation might be. Saint Martin's is also full of some of the most supportive faculty I have ever had the chance of meeting.

Sometimes being apart of one of the first LGBTQA clubs has it's struggles.

When I say one of the firsts, I mean that the effort to keep such a club strong and continuous is a serious struggle. When I became apart of the LGBTQA* club in January 2015, it was in it's second year being resurrected. A handful of students before us had tried to lift the club off of its feet into making it successful, but with a lack of involvement from students outside of the club it has been hard to keep it afloat. I took on the responsibility as club Co-President with a very good friend of mine the following year, and now find myself as acting president as of this Fall. There are so many things we want to accomplish in order to create an inclusive environment for both staff and students, but it has been deemed anything but easy to thrive as much as we would like.

There is an unspoken disagreement between the queer community and the administration.

While we have support from select faculty and staff, not everyone "up on the hill" as we say, is as supportive. In my experience, it seems that there are folks with power who are afraid of change within our Benedictine community. As we move more than half way through 2016, it still amazes me that it is as difficult as it is to be able to have the same rights as students in other clubs. As a club, we have had to face discrimination with our advertisement, and for years we have walked around in fear of being able to put on certain events that we feel might bring the community closer. While the discrimination isn't as obvious as some might think, it still has us questioning where we begin fighting for what we believe is the first step towards progression.

While there may be some hardships along the journey of attending a Catholic university, there are some come ups, too.

Teaching heterosexual allies what it means to actually be an ally, is one of the most rewarding experiences.

It has been incredibly moving to watch faculty and staff teach our small community what it means to be an ally. How they can help our movement and be a part of something great. I've sat through two Safe Zone trainings, and I have walked away with new knowledge every time. It's a chance to educate our community on the correct vocabulary used within the LGBTQ community, and it's a chance to answer the dire questions that some folks might be too afraid of asking their queer friends or family members.

As I prepare to graduate with my Bachelor's degree this May, I find myself reflecting a lot on my experience at Saint Martin's University. I think about my many roles as a student leader and an advocate, and I find myself thinking about how many different ways my identity has manifested into what it is today. Struggles and all, I am incredibly proud of have gone through what I have as a queer woman of color at this institution. I am often told that if there is going to be a mark made at this university within the LGBTQ community, it is going to be now. To say that I am proud to have been involved in such a growing process is an understatement.

We still have so much to do in this year alone, but I cannot wait for our SMU community and the communities that surround us to see what we have in store. It's going to be a year that we will never forget.