This drink provides us with the fall vibes we're all looking for during this time of year. 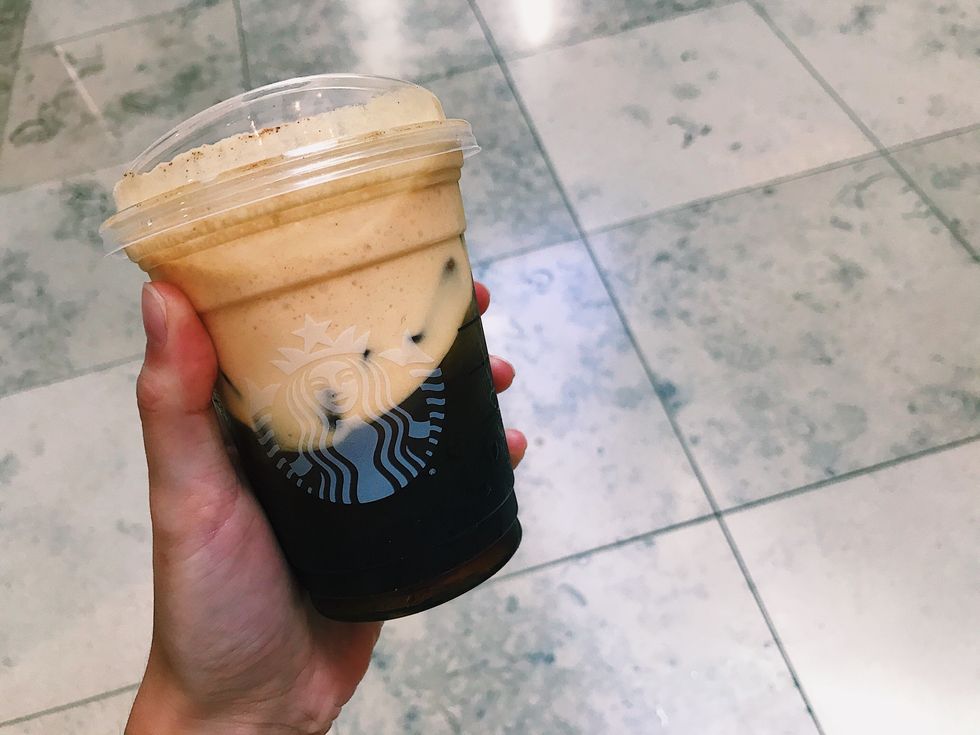 Now that the fall season has officially begun as of September 23, you can finally head to the nearest Starbucks and order up your favorite Pumpkin Spice Latte, all while enjoying the cool and crisp air of autumn. However, although October has already arrived, the 'crisp air' does not seem to be gracing us with its presence anytime soon.

With temperatures nearing the 90s on a day-to-day basis, — with no true end in sight, honestly — ordering a piping hot Pumpkin Spice Latte would only make the heat worse and much more humid than it already is outside.

When Starbucks launched its newest fall drink, the Pumpkin Cream Cold Brew, you could believe my excitement was relatively high.

This brand new cold brew hit the Starbucks coffee shops on August 27 for all of the coffee lovers to try before the weather finally cools down. Only a few days after its launch, I quickly marched my way to Starbucks after class and immediately ordered a grande Pumpkin Cream Cold Brew.

Though it may sound dramatic, as soon as I tasted the pumpkin pie-like foam mixed with the refreshing flavor of the cold brew, I knew I could never go back to a Pumpkin Spice Latte again.

The iced drink is a much better alternative during the hot days that made up most of September, especially when you're looking for something to cool you down.

This fall drink is also very similar to Starbucks' Vanilla Sweet Cream Cold Brew. The Pumpkin Cream Cold Brew is made with Starbucks cold brew, vanilla, and a frothed pumpkin cream cold foam to create the float on top of the drink. A pumpkin spice topping mixed with cinnamon and nutmeg is added to the surface of the drink, making for the most aesthetically pleasing drink you may find at your local Starbucks.

At first sip, the sweetness of the pumpkin spice mixed with cinnamon and nutmeg on top of the cold brew shocked me. However, the foam eventually mixed in with the slight bitterness of the cold brew, making for the perfect fall drink.

Personally, I believe the pumpkin flavor is not as obvious as the Pumpkin Spice Latte, and it is also not as sweet either, which makes the drink more pleasing on a day-to-day basis rather than special occasions.

The Pumpkin Cream Cold Brew is a drink that I highly suggest trying. Not only does it encapsulate the exact taste and smell of fall, but it also leaves me satisfied and ready to take on my day with a positive attitude. It is the exact drink that I need to get through my week!