The Piece Of Foreshadowing In 'Hamilton' That Everyone Misses
Odyssey

The Piece Of Foreshadowing In 'Hamilton' That Everyone Misses

A look at the Bullet's swift transformation into a omen of death. 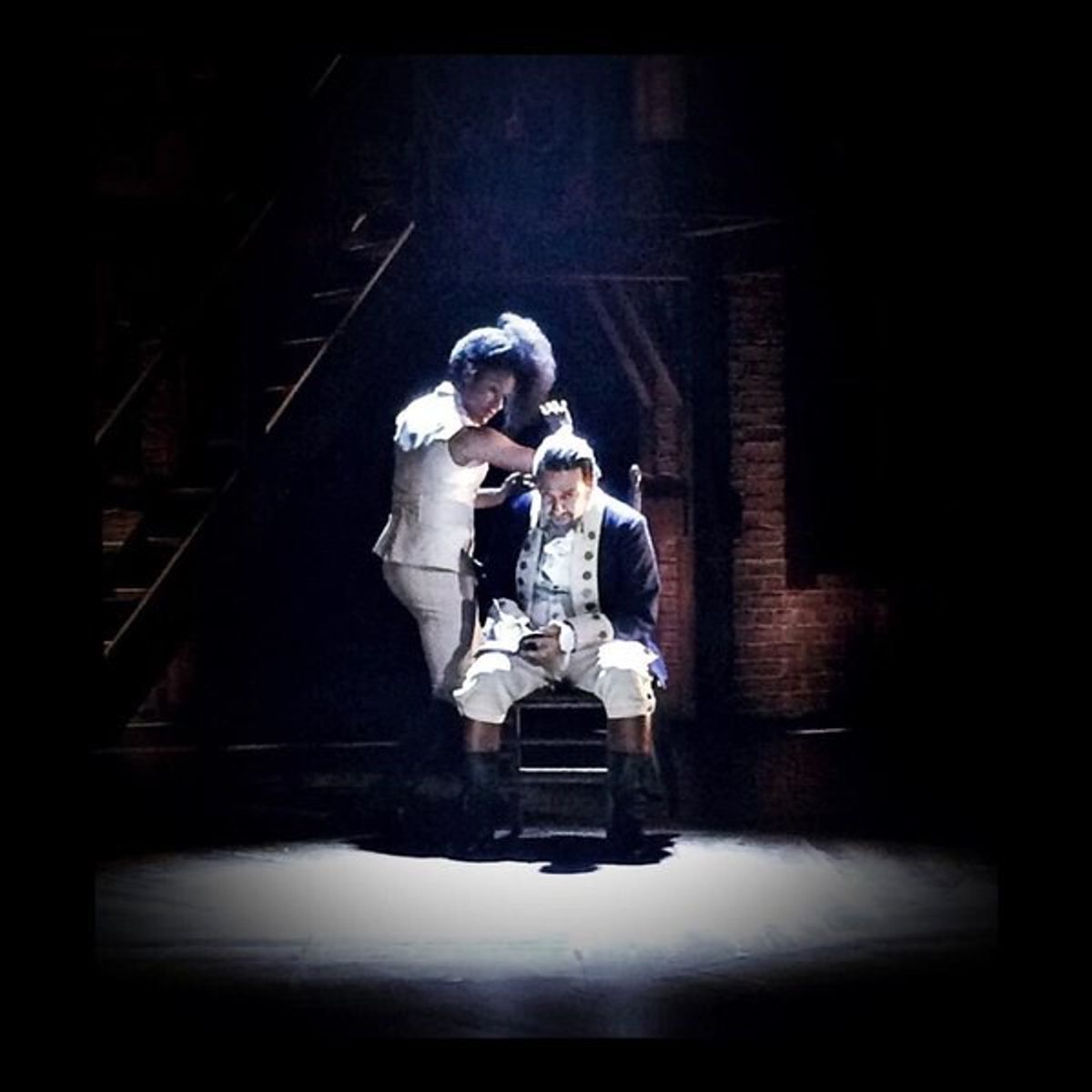 From its lyric to its musical motifs, to its staging, saying Broadway's "Hamilton" loves its foreshadowing would be an understatement. The ensemble's role in hinting at the future is no secret, since most of the foreshadowing is audible on the cast album. They begin the show as most ensembles do: as dancers, unseen voices, and background/one-off characters, but quickly begin to morph out of those common molds within the first ten songs. By the middle of the first act, they have become a manifestation of thought, mainly Hamilton's (the repetition of "My Shot" at the end of "Right Hand Man" sticks out in particular) and Burr's ("Wait For It"), and as Act I closes, they morph into a full-on Greek Chorus, knowing Hamilton's future and warning him of what is to come. "Say No To This" is a prime example of this, with the ensemble urging Hamilton to "go," to say "no" to his affair with Maria Reynolds, and from the end of "Non-Stop" to the end of "Hurricane," it seems Hamilton can't allude to his death, intentionally or not, without the ensemble telling him to "wait," that his time is coming.

The ensemble's most effective and intriguing piece of foreshadowing, though, is not on the cast album and is one that I have noticed is often overlooked until it is too late by every person I've talked to who has seen the show. The Bullet, an ensemble member with nothing to separate her from the rest but a poof of curls at the top of her head, morphs not only into a Greek Chorus member, but into a signal of death approaching until she eventually (historical spoiler alert:) approaches Hamilton at the end of the show as an embodiment of the shot that killed him.

At the start, the Bullet is indistinguishable from her fellow ensemble members. Most of the ensemble steps into the spotlight a couple times, though, as everything from named historical figures like Samuel Seabury and James Reynolds to small speaking roles, and the Bullet is no different. After "You'll Be Back," she steps forward for the first time as a spy receiving a letter, only to have her neck snapped by a redcoat and become the first death of the revolution. However, unlike the rest of the ensemble, who return to the anonymous chorus until their next role, the Bullet never seems to leave that first moment behind. Her next appearance as a singular character is in "Stay Alive," when she becomes the actual Bullet for the first time as she passes Hamilton by at the sound of the gunshot at the top of the song, and from that moment on, every second she is allowed the audience's full or even partial attention, she becomes a harbinger of death.

Though her connection to death is most apparent in Act II, she is absolutely present and aware of his role as the Bullet from the beginning. When asked about playing the Bullet in an interview with "The Great Discontent," Ariana DeBose, the original Bullet, said, "I always know I’m aiming for him—even if the rest of the ensemble members don’t. So even if I’m just a lady in a ball gown at a party, there’s still a part of my character that knows that that moment is going to come.” Even when the spotlight is not on her, every moment the Bullet is onstage has significance. Whether it's in "My Shot," when the ensemble unfreezes one by one as Hamilton moves toward them during his first recitation of the "I imagine death so much it feels more like a memory" monologue and the Bullet is the last one to move, her hand still outstretched toward Hamilton as he steps in front of her, or it's in "Ten Duel Commandments," when the ensemble lines up between Hamilton and Burr, singing, "Pick a place to die where it's high and dry," and the Bullet places herself directly at Hamilton's side, the connection between them is already being formed. Knowing that the Bullet is fully aware of the final meeting she and Hamilton are hurtling toward makes the short moment in "Ten Duel Commandments" when Hamilton looks at her lining up beside him, the only time he ever seems to truly see her before his final moments, and the pair stand side by side for numbers six and seven of the Commandments, moving through the choreography in sync, feel hugely significant in a way it never would otherwise.

Several songs later, during "Yorktown," she kills a redcoat with Laurens in South Carolina. They celebrate for a brief moment before she returns to the ensemble, and the show moves on. It until three songs later that the audience and Hamilton learn that Laurens was shot and killed in South Carolina not long after the fighting ended. It is a short and easily dismissed interaction, but this is the first moment that her actions are entwined in someone's death. This quick look the Bullet and Laurens share in "Yorktown" begins to feel like Laurens sealing his fate with a handshake in retrospect.

This quick tie the Bullet forms with a person as they are about to die becomes extremely important in the second act, when she really steps into her role as the Bullet. Her spoken lines, though few, are particularly significant, as every one of them eventually leads to someone getting shot – namely, Philip and Hamilton. In "Blow Us All Away," she tells Philip exactly where to find George Eaker, the man who will kill him, singing, "I saw him just up Broadway, couple of blocks. He was going to see a play.” Philip follows her directions and challenges him to the duel that will kill him. Her only other spoken line is as one of Burr's supporters in "The Election of 1800," when she says, “I can’t believe we’re here with him” and flashes Burr a large, hopeful smile. Burr leaves the exchange with a fist pump, believing he has the election in the bag, only to have that hope ripped away when Hamilton's support of Jefferson leads to him losing the presidency and challenging Hamilton to the duel the whole show has been foreshadowing. At the start of "Your Obedient Servant," when Burr actually challenges Hamilton, the Bullet actually pulls Burr's desk onto the stage and hands him his quill so that he can begin his fateful letters, edging his toward the battlefield. Every action she takes ensures that Hamilton meets her one last time.

Once she has successfully gotten the pair to pull their guns on each other's, she appears for a final time as the actual bullet, slowly approaching Hamilton throughout the entirety of his final monologue and coming dangerously close to him as he moves, scatter-brained, across the stage. Halfway through, he steps right in her path, turns back and stumbles out of the way, and as he frantically repeats, "Rise up, rise up, rise up," she lunges for him, only to be pulled back by another ensemble member as Eliza steps in her path. Once Hamilton has been shot, she joins the ensemble once again, satisfied that the path she's been on since the beginning has come to an end.

I have only seen "Hamilton" once, unfortunately, and only noticed the Bullet's significance throughout the show by chance when I found my eye drawn to her because I liked her hair. The few things I did notice are most definitely not all of the foreshadowing that the Bullet presents, so if you get the chance to see "Hamilton," make sure to keep her in the corner of your eye. It is not immediately clear which ensemble member will become the Bullet now that Ariana DeBose has left the Richard Rogers, but once you witness the first death of the revolution, you'll know.