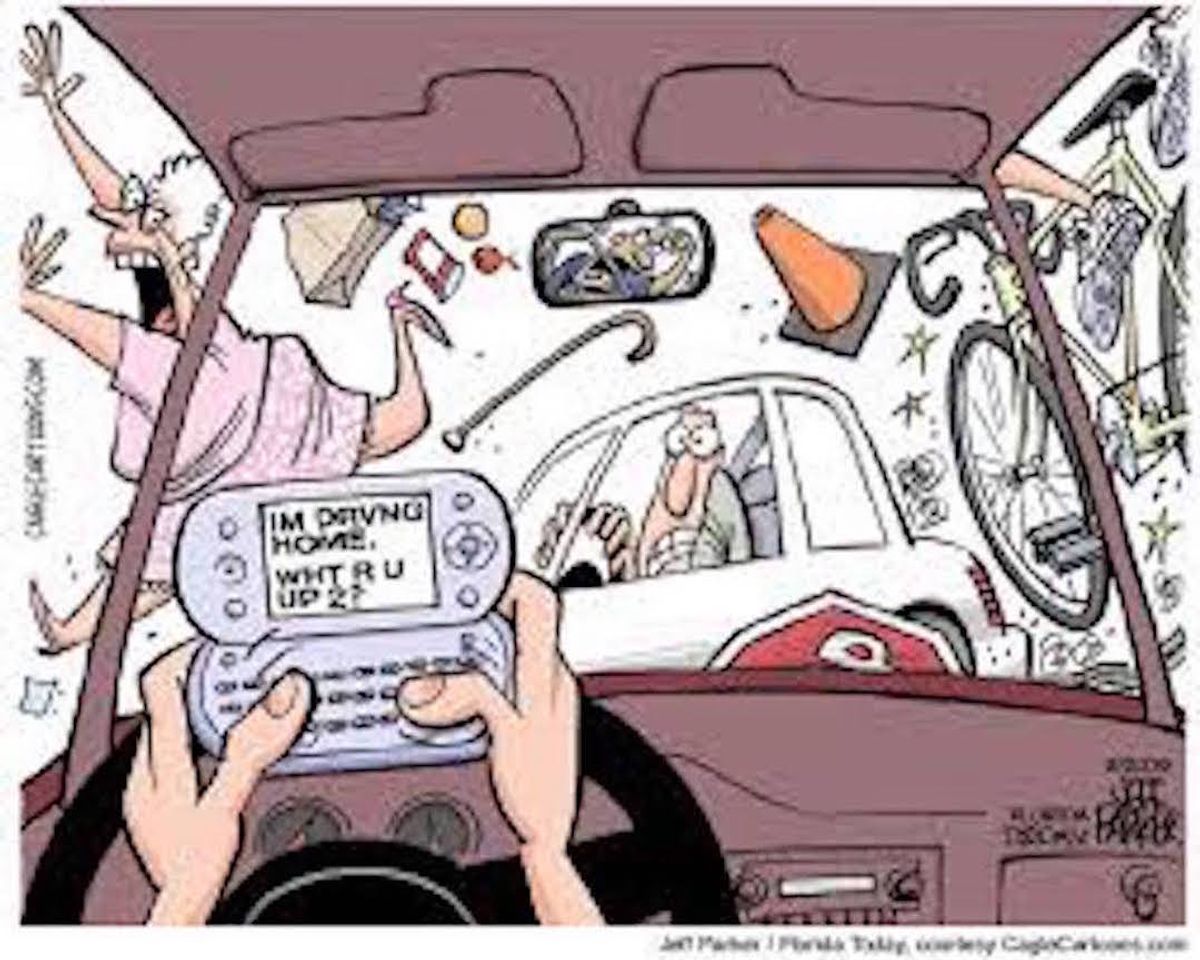 We as a human species are easily distracted by any and everything. The human attention span is on average roughly 8 seconds long. Which means texting and driving, or being distracted in general while driving is simply impossible to achieve without some consequences. Actions individuals should take to reduce distractions while driving is to limit phone usage by using their phone’s only for emergencies, avoid eating while driving, completing any task’s outside of the car, and limit the level of passengers as well as the activity during the car ride.

You're at the movie theater and you suddenly realize you need to use the restroom. So, you go to the restroom, and while you're out you buy some popcorn. Did you miss part of the movie? Yes, indeed you did! When in class do you look down at your phone to check your social media, or do you engage your focus in something else other than your teacher/professor? I may be assuming, but I know that there's at least one person out there who does. So, if you do or even if you don’t, you’re not paying attention! These scenarios compare to the distractions while driving, because each distracts you from paying attention.

So, while driving; why use your phone, fix your hair, eat food, along with other distractions? Not paying tuition to professors is purposely throwing away college tuition. Studies show that 11 teenagers are dying daily because of texting while driving. Per AAA poll, “94% of teen drivers acknowledge the dangers of texting and driving, but 35 % admitted to doing it anyway”. So, pay attention to the road!

Using your cell phone should be used for emergency purposes only. Even at that time you shouldn’t be using your cellular device while driving. Instead you should pull over into a safe area and use your phone. Many think that hands free devices are safe, but you can certainly miss important visual and audio events causing you to crash. Psychologist show that Inattentional Blindness is what causes the gap between focusing on two things at once. Inattentional blindness; is a psychological lack of attention, and causes the brain to fail at perceiving unexpected stimulus that’s in plain sight. Yes, I know it can be difficult, so put your phone away along with any other distractions. Limit the amount of talking to your passengers by stating at the beginning of the car ride you won't be talking as much because you can't do two things at once while driving. Psychologists have proven that you can't put your full attention towards multiple tasks at the same time. Making it impossible to eat food, and pay attention to that guy switching into your lane with no blinker.

Another distraction while driving is time. The fact that you’re running late for work can erase your mind of all safety precautions, and can land you in an accident. To avoid rushing while driving, try setting your alarm clock thirty minutes to an hour earlier than you usually get up. Preparing yourself before you leave the house gives you more time to relax and transition into driving mode.

Driving can be dangerous. So, buckle up, set rules, and focus on the road! The important factor when driving is getting to your destination safely. Millions are dying because of the consequences of a car accident, don't let it happen to you!